The First Rule of Hook-ups 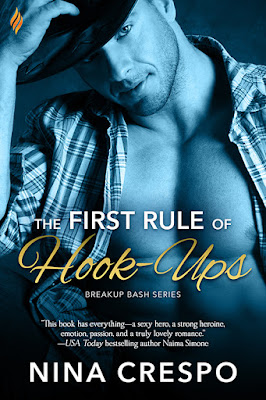 In THE FIRST RULE OF HOOK-UPS, Alexa and her friends attend the Breakup Bash—a party held at Club Escapade to help women get over one man and move onto a better one. Months earlier, Raphael had danced on stage at the club to settle a bet on Alexa’s bachelorette night. Neither one of them have forgotten the supposedly innocent, all-in-fun kiss they shared.

In the midst of the party, her friends have wandered off, and she’s ready to leave. The music begins and she sees Raphael, her secret fantasy, on stage. Once again, desire heats up. And this time, she’s definitely not engaged.

* * *
Alexa’s knees had grown weak, and she’d had to drop into the chair. And she was suddenly a little light-headed. Why was it so damn warm? Had the club turned down the air conditioner? She slid her empty glass aside, grabbed Nat’s, and sucked down the dregs. She needed something to cool her off and obliterate the images Raphael conjured up. Sex. Under him. On top of him. In every position possible.

A song with a faster tempo and lyrics advocating riding a cowboy instead of a horse replaced the first and spurred even more sensual images.

Holy shit. She needed a drink. Bad. A server had passed by a minute ago. Where was she now?

The DJ’s voice broke in over the song. “Looks like the cowboy on stage is ready to ride. Who’s going to break him in?”

Women held up their hands or pointed to friends.

The two Hunks searched for a lucky victim.

It wouldn’t be her. Alexa stood up as they moved away, intending to head for the bar. Some other woman would get the chance to run her hands over Rafe’s sculpted perfection. Not that she cared. A ping of disappointment struck. Okay, maybe she was a tad envious. She squeezed through the group behind her. Someone grasped her arm. She turned her head and met the liquid brown gaze of the Hunk sporting a shaved head.
He winked at her and smiled. “You’re wanted.”

Before she could respond, he ushered her past tables and steered her up the stairs to the stage.

Raphael’s predatory stare blocked out the room. Her mouth grew dry, and her heart knocked against her rib cage. What did he want with her? Why did the Hunk next to her have a rope in his hand? Did Raphael plan on tying her up? Was it wrong that she wanted to tie him up and ride him instead? Of course it was! Sex wasn’t part of the show’s carefully choreographed entertainment.

The blond Hunk looped the rope around her waist. He tossed the free end across the stage.
Raphael caught it. He wound the lasso around his hand, pulling her closer. When she was a few feet away, he jerked her forward.

She fell into him, and the pleasing mix of sandalwood, citrus, and musk surrounded her. The slightest brush of his lips over her earlobe sent a rush of desire flooding to her middle. What is he doing?
* * *

THE FIRST RULE OF HOOK-UPS


Someone once told me that there are worst things than being left at the altar. Well, not many, in my experience. That was six months ago, though, and my life has moved on. Heck, I have a new job lined up and I'm leaving town.
But, I can't deny that my love life kind of sucks.
That’s why I let my friends convince me to join them for Club Escapade’s Breakup Bash. And we might just be disillusioned enough to actually enjoy it. Last time we were here, it was for my bachelorette party. That night, I met one of the dancers – Raphael – and when he flirted with me, I almost forgot I was engaged. And there's a part of me that never forgot him.
Now, it seems my friends have wandered off and I’m thinking about calling it a night. Until the music begins and I see Raphael, my secret fantasy, on stage. And this time, I’m definitely not engaged...