Congratulations to "Lois M.", the winner in Christina's giveaway. Thank you to all who participated!

Hi All!  I’m Christina Elle and I write quirky romantic suspense.  I love witty banter and two characters who are always getting on each other’s nerves.  My new release, ON HER SIX, pairs a stubborn, wanna-be cop with a pissy, thinks-he-knows-it-all DEA Agent. I absolutely loved watching these two go at it! 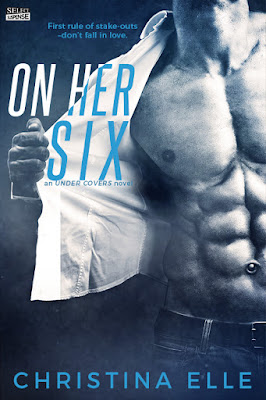 Sam works as a clerk for Baltimore City Police. She has been searching for her dad, who is presumed dead after he worked as an undercover cop trying to capture a drug dealer. She lives across the street from her grandmother, who is the head of the neighborhood watch. The rest of the watch is made up of three other old ladies who each bring their own flare to the story.

Ash is DEA and is in Baltimore because there is a dangerous drug dealer lurking in the area (it’s the same drug dealer Sam’s dad was after. UH OH!! hehe).  Ash is only supposed to observe what he sees and report back to his team so they can bring the bad guy in. But when Sam lands herself in trouble, he has to save her. In order to keep his cover, he lies about who he is.  Of course, not believing a word he says, Sam and her pack of grannies host a stakeout to learn as much as they can about their new neighbor.  And what ensues is hilarious, action-packed and steamy. This story was so much fun to write!

Here is an excerpt:
He was done. He could take caning across his bare back or bamboo under his fingernails, but he sure as hell didn’t stand a chance against this kind of torture. A man’s resolve was only so strong against a woman like Sam. Telling his subconscious to take a hike, he hitched her leg over his lap. She drew a quick breath, but then settled astride him as if her body was made to fit his. Her legs cradled his thighs, and the center of her heat married flawlessly over his growing erection.

Imagining what it would feel like to be buried deep inside her, he shifted to encourage more friction. Her body went rigid, her spine as straight as a damn board, then she relaxed and trailed her hands along every piece of his available skin. Up under his sleeve to his biceps, where she squeezed the muscles; across his chest and stomach; his back. The impression of her touch lasted even after her hands moved on to their next location.

His shirt was off in seconds, and he was doing his damnedest to remove hers just as quickly. Would she be upset if he ripped it from her body? It was a mere scrap of fabric anyway.

About the Author
Christina believes that laughter really is the best medicine, which is why in her stories she blends a healthy dose of hilarious hijinks with gritty suspense.

She lives near Baltimore with her husband and two sons, who give her an endless supply of humorous material to write about. She is a member of Romance Writers of America and Maryland Romance Writers. She is represented by Margarget Bail at Inklings Literary Agency.

She loves hearing from friends and followers, so feel free to send her an email or connect through social media. 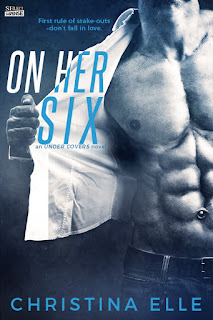 New neighbors are bad news in Samantha Harper’s experience. Especially ones as suspicious and brooding as the guy who just moved in next door. So when the dangerous but sexy stranger seems to be involved in something illegal—the aspiring cop in her takes action. If only she could stop thinking about how he looks naked...


All DEA agent Ash Cooper wants to do is lay low and survive this crap surveillance assignment. But after a run-in with his attractive neighbor, he realizes that’s going to be much harder than he planned. Keeping the woman out of trouble is hard enough, but keeping his hands off her is near impossible.

Giveaway:
Christina will be giving away a $20 Amazon gift card to one lucky person leaving a comment or email entry.

Giveaway ends 11:59pm EST May 27th. Please supply your email in the post. You may use spaces or full text for security. (ex. jsmith at gmail dot com) If you do not wish to supply your email, or have trouble posting, please email maureen@JustContemporaryRomance.com with a subject title of JCR GIVEAWAY to be entered in the current giveaway.