The Secret’s Out! AKA The Secret Baby Story

Congratulations to Sasha R and Mary Beth, the winners in Barbara's giveaway. Thank you to all who participated!

The subgenres of romance can rise and fall in popularity, sometimes on a cyclical basis.  One year, vampire stories may be hot, while steampunk is on the wane; the next year, we may see the reverse.  The following year, reader tastes may gravitate toward historical or romantic suspense.  But popular storylines (also known as hooks or tropes) seem never to go out of style.

Some people love the secret baby plot, where a heroine becomes pregnant and—for many different reasons, depending on the book—doesn’t reveal this to the hero.  I’ll confess, the secret baby story is a plot that hooks me again and again, both as a reader and as an author. 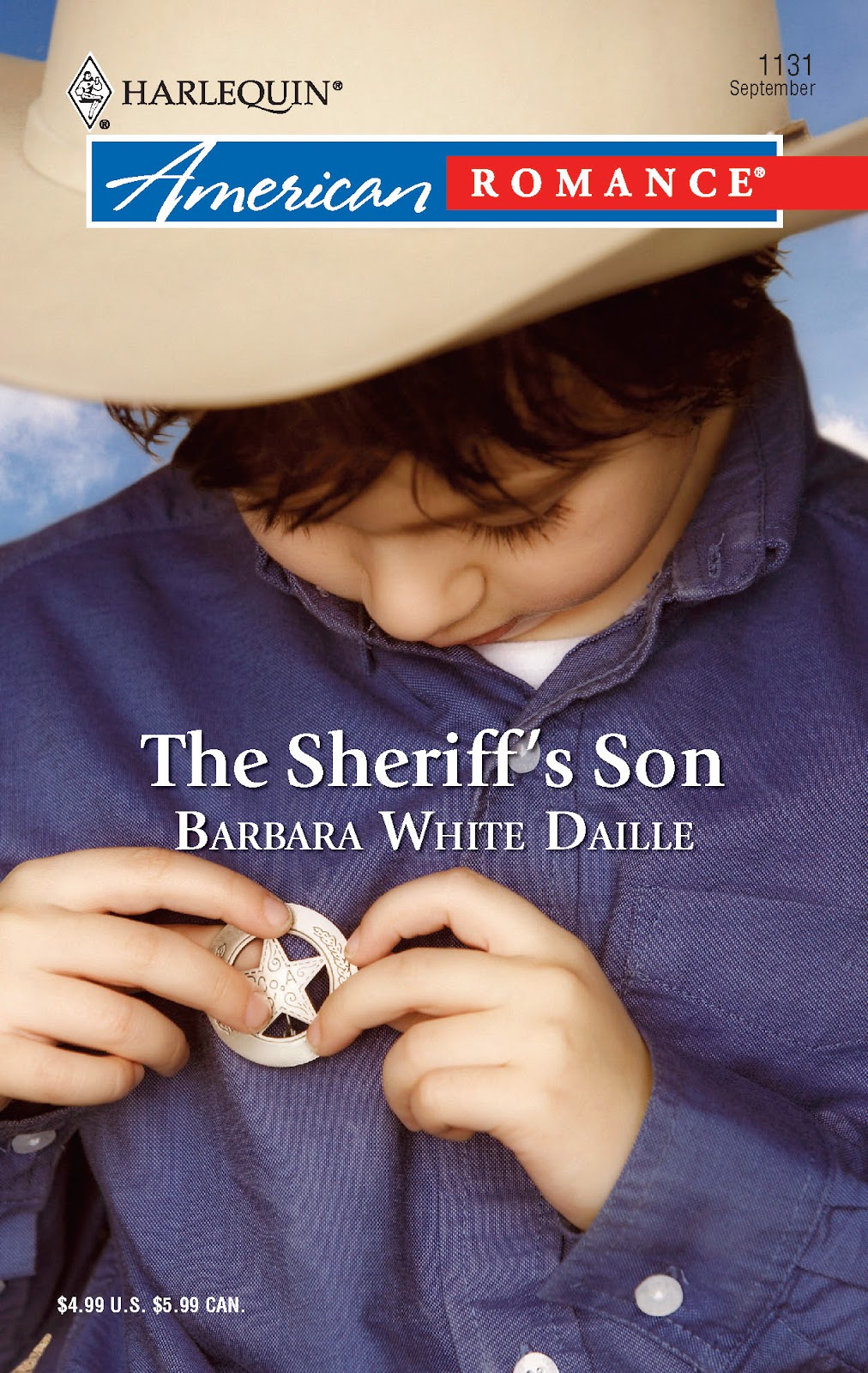 I love agonizing with the heroine when the unsuspecting hero returns to her life, watching the hero deal with the discovery he’s a daddy, and most of all, worrying over this couple’s struggle to overcome hurt and betrayal to do what’s best for their child.

My first published book, The Sheriff’s Son, is being re-released this month for the first time in e-book format.  And yes, it’s a secret baby story.

After graduation, Tanner Jones left home, never to return—until now.  Tanner is a deputy sheriff assigned temporarily to their small town, and he and Sarah are brought together during a crisis concerning the son he doesn’t know is his.

Here’s a quick peek at their reunion:

Tanner Jones seemed to fill her vision, standing taller and more broad-shouldered than she ever remembered, but looking, unfortunately, all too familiar.  Except for the deputy sheriff's badge decorating his chest and the gun resting on his hip.

A frown rumpled his brow and his hand gripped the back of a bright blue T-shirt, pulling up with just enough pressure to keep the boy inside the shirt dancing on tiptoe.

The son she never wanted to see in trouble.

The man she'd once loved.  Once lost.  And never wanted to see again.

Her stomach dropped.  His voice had deepened with the years, but his once well-loved drawl triggered a fully-illustrated volume of unwanted memories.

Sarah focused instead on Kevin, whose yelp revealed much more than his missing front tooth.  What had he done?  And why did Tanner have to be the one to catch him?

Coincidentally, my current release is also a secret baby story.  Well into The Texan’s Little Secret, Luke still doesn’t know what Carly has to hide.  But now, he has a little girl of his own—and he’s determined to find out why Carly shies away from his beloved daughter. 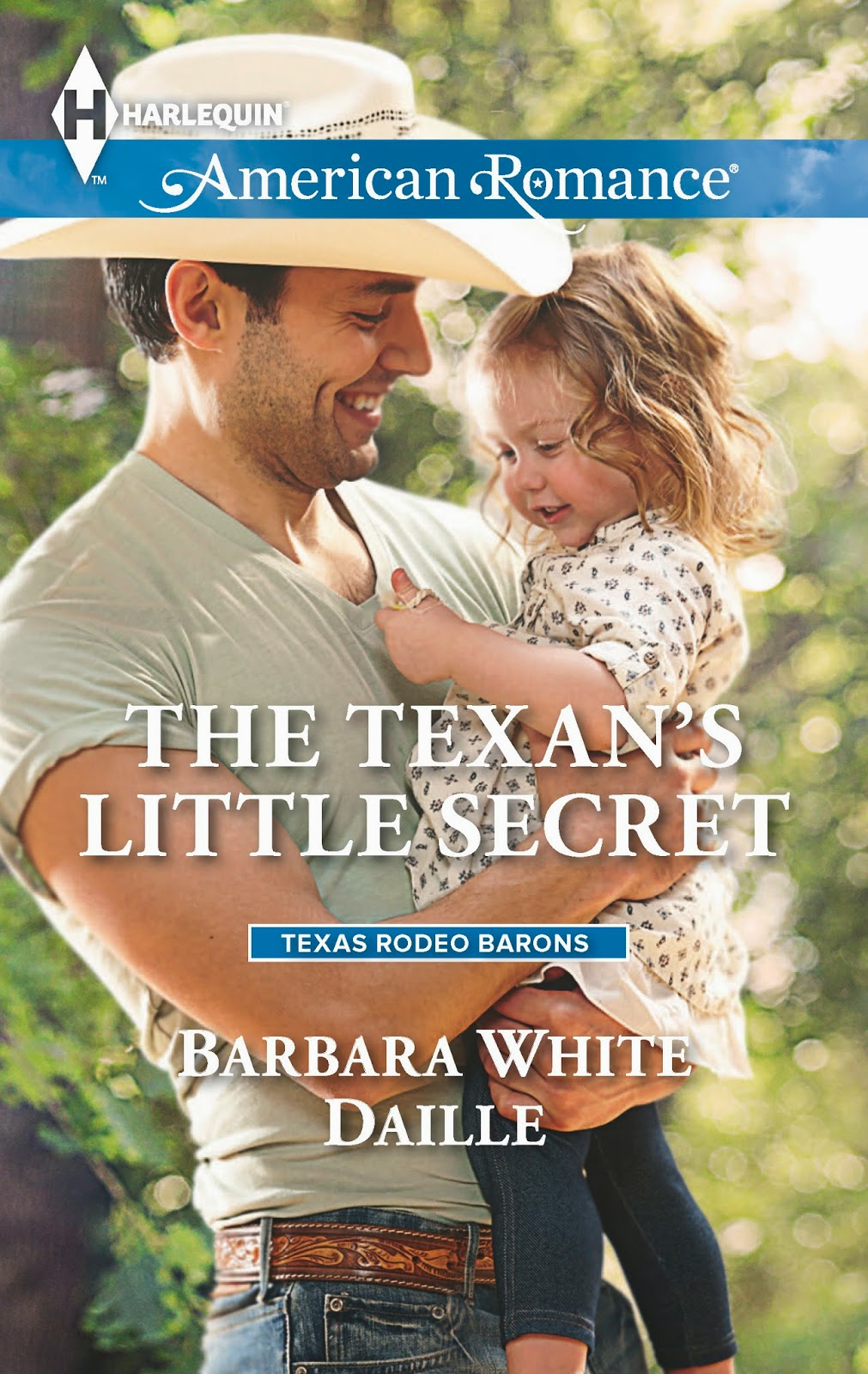 The Texan’s Little Secret is being called “a secret baby story with a twist.”  No spoilers about that here!

But I will share this brief clip from the story:

"Today, Rosie," he said as he parked the truck, "we're not taking empty promises for an answer."  He unbuckled the restraint on her carrier in the back seat.  "Either her shoulder hurts too much and needs some attention, or her shoulder's healed, and I need to follow through on the assignment the boss gave me.  Right?"

"Da."  She slammed her hand on the side of the carrier.

He kissed her petal-soft cheek, then nuzzled it with his nose, knowing she would laugh.  And she did.  Life for Rosie Nobel was just one big bowl of cherries.

There was no way anyone could not love his baby girl.

Which is why it beat the hell out of him when, every time he mentioned her name, Carly changed the subject.

"We're not taking that today, either, are we, Rosie?  Let's see her talk about something else when you're right there in front of her face."

And Rosie would be right in front of her….

Hope you enjoyed the clips!  See more about both books below.

Also, I’m giving away autographed print copies of both The Sheriff’s Son and The Texan’s Little Secret.  Check out the Rafflecopter below.  Winners will be announced here at Just Contemporary Romance.

And now, I’d love to know:  do you enjoy secret baby stories, too, and if not, what’s your favorite romance storyline?

Seven-year-old Kevin has been a handful for single mom Sarah Lindstrom, and when the new sheriff walks through her door holding her son by the scruff of his neck for egging his car, she knows she's lost control. But can she control herself—and keep the secret she's kept for so many years?

Tanner Jones has no idea Kevin is his son—he lost the right to that information when he abandoned Sarah soon after graduation. Just because he's back in town doesn't mean he can waltz into her life—and Kevin's—to pick up where they left off. But Sarah can't deny the feelings she still harbors for Tanner, and can't deny how her son is benefiting from his attentions.

When Tanner finds out the truth, what is he going to do?

Coming home might be the worst decision Carly Baron has ever made. Each minute on her
family's busy ranch is one minute closer to seeing him—her first love—the man who broke her heart seven years ago. While coming face-to-face with Luke Nobel again brings back painful memories, Carly quickly realizes there are other strong feelings just under the surface….


The Sheriff’s Son is available for pre-order at your favorite e-book retailers, including Amazon.

The Texan’s Little Secret can be found in both print and e-book formats at many locations, including:


Barbara White Daille
Originally from the East Coast, award-winning author Barbara White Daille now lives with her husband in the warm, sunny Southwest, where they love the lizards in the front yard but could do without the scorpions in the bathroom.  Barbara writes romances—usually with cowboys, kids, and a touch of humor.  Her current titles are The Texan’s Little Secret and—re-released for the first time in e-book format, The Sheriff’s Son.

Giveaway:
This giveaway will be open through October 8th. US Postal addresses only.
a Rafflecopter giveaway
Posted by Maureen A. Miller at 12:30 AM