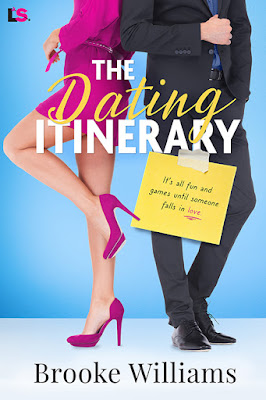 As if it wasn’t bad enough to be deemed the “most single person” at her magazine’s office, budding reporter Penny has now been tapped to write a series of features called “The Dating Itinerary.” From speed dating to Tinder, old-fashioned matchmakers to up-and-coming “dark dating,” Penny now has to go on a lot of dates. Silver lining: meeting new people should be fun, right? But running into her old rival, George, at her first dating event is decidedly not. Not only does the arrogant know-it-all have zero trouble attracting women, wherever Penny goes, somehow he just. Keeps. Showing. Up.

Penny rocked back and forth in her chair. She had absolutely nothing against facial hair, but the man sitting across from her had braids in his long beard. Plus, all the chunks from his soup that had dribbled down his chin were now caught in the hair—and he hadn’t even attempted to pick up his napkin.
She’d said she wasn’t all about appearance--and she meant it. The man did have kind, brown eyes and broad shoulders, but he wasn’t ticking any of the boxes on the personality side. He kept talking about duck hunting. Penny loved ducks! And he kept raising his eyebrows at her like they were sharing secrets, only she wasn’t in on the secrets themselves.
When her phone buzzed in the pocket of her pants, she was torn. She knew it was rude to just dig it out and check, but on the other hand, did she really care at this point? Penny slowly pulled the phone out and glanced at it discreetly beneath the table.
“On a date?” the text from Geo read.
She typed a quick, “Yes.” And hit send. On second thought, she typed, “Help” and hit send again. She returned her attention to the man before her and nodded and smiled as he took another bite of soup, the cracker he’d crumbled into it earlier lodging inside his beard. He might have a whole meal in there by now.
“Where?” Geo’s text came quickly, and Penny blinked at the screen before nodding at her date once again. It took her a minute to type the restaurant name into her phone in little pecks here and there. She didn’t want the man to report back to the matchmaker that she had been distracted during their date. When she hit send, she felt a sense of relief. She didn’t know if Geo was actually going to help her, but just having someone know that she wasn’t having a good time was a nice feeling.
She placed the phone under her leg, hoping it would buzz with a fake emergency from one of her sisters. Why hadn’t she taken Quarter’s advice and had her call at a certain time? In fact, she’d actually asked her sister not to call. She’d have to eat crow for this one. And put Nic, Q, and Di on speed dial for every date after this, just in case. The restaurant owner was a family friend and it was a public location. Plus, the matchmaker vetted both the men and women so Penny felt safe enough with the meeting. Perhaps she was too quick to trust the small lady behind the giant desk.
“So.” The man leaned forward, the end of his beard now officially in the soup . “This is going well, huh?” He raised his eyebrows three times, his chin bobbing up and down in the soup as his face moved.
“Um.” Penny had no idea what to say. She didn’t want to tell him to his face how turned off she was by his beard. Perhaps if it weren’t braided—or maybe didn’t have so much soup in it…
“What do you say we get out of here?” More eyebrow waggling.
Penny frowned. Her phone buzzed against her leg and she desperately grabbed at it and sneaked a look. “Bathroom,” it read.
“Excuse me, I’m going to use the restroom.” Penny stood, stuffing her phone back into her pants.
“I understand,” wave wave, “freshen up why don’t you,” wave.
Penny wanted to take a pin from her purse and attach his eyebrows together so they couldn’t wave at her any longer. She was not going to “get out of there” with him, but she was getting out of there. And she hoped Geo could help.

Giveaway:
Brooke is giving away a $5 gift card to one lucky person leaving a comment or email entry.

Giveaway ends 11:59pm EST September 10th. Due to GDPR regulations you no longer need to submit your email address in the comments. If you have been selected as a winner your name will be posted at the top of the post. You may then contact maureen@JustContemporaryRomance.com to claim your prize. Your email address will be shared with the author/publicist providing the giveaway.