Congratulations to "Hefleyl2169" and "Bn100", the winners in Laralyn's giveaway. Please contact JUST CONTEMPORARY ROMANCE to claim your prize! 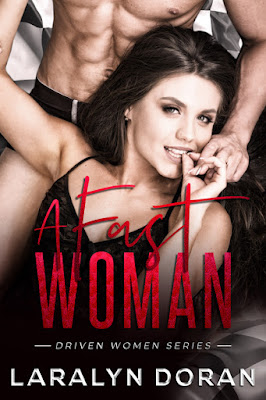 A bold, female stock-car driver versus a charming, champion, male open-wheel driver…dangle a coveted contract and rev the engines with undeniable chemistry—A Fast Woman is an enemies-to-lovers story that will keep your heart racing.

Strap in—it’s a heck of a ride!

CJ Lomax
People called me a fast woman—not because I slept around—because I broke men’s hearts on the racetrack. While climbing up stock car’s highest level of racing, I learned three truths: Adrenaline was my drug of choice, wearing a pair of heels was a form of torture, and I didn’t have time for distractions—especially from men.
I had one goal—a Cup Series contract—and it was within my reach.
Until Grady McBane cut me off—sending me, and my dreams, into a tailspin.
His damn smile, his charm, his talent… his touch. My damn hormones overrode my focus.
Grady McBane
The moment the beautiful, spitfire CJ Lomax tripped into my arms, it felt right.
Then Karma stepped in and laughed—Redeeming my reputation meant ruining her dream.
Even though I needed the contract to salvage my career, I found myself chasing her instead of racing her.
Her focus, her sass, her grit…her passion. I wanted it—I wanted her.
How could we cross the finish line without wrecking each other’s hearts?

A Fast Woman
Excerpt
Grady casually put his hands in his jean pockets, rocking back on his feet and stood next to me, flashing everyone his devastating full smile. “You shouldn’t have said that about Dewey, you don’t want to ally yourself too closely with me. I’m a lightning rod when it comes to him.”
He shrugged. “He doesn’t scare me.”
Just look at him. How in his element he was—how sure of himself he was.
Then, there was me. Put me in the monster machine and I was a beast. Confident, strong. But here, on the outside of the machine, standing next to this man with his golden aura and oozing charm? My confidence was as small as my stature suggested. Did they know?
I turned my gaze from the myriad of faces and focused on his. He looked down at me. And I knew that would be the next photo to go viral.  The twinkle in his eye said he knew it, too.
But I wasn’t alone.
He turned to face me, and quiet enough so I was the only one who could hear, he said, “Let’s get you in our car.”
Damnit, I wanted to hug him.
Hug him. I wasn’t a hugger. I wasn’t even affectionate.
What the heck?
Maybe it was seeing the other drivers with their families and the thought of Tommy earlier. The thought of being a bit lonely.
Grady put his hand on my shoulder and the contact seared straight through me. It electrified me.
“Good luck, kick butt…run them over…put them in the wall…all that…” He lifted his hand as if to place it on my head before I stopped him.
“If you ruffle my hair, I’ll kick your butt right here on national TV.” I smiled and sweetly said it through clinched teeth and stepped on his foot to get my point across.
Just like that, he threw his head back and laughed.*

Giveaway:
Comment below and be entered for a chance to win one of two free e-book copies of
A Fast Woman

*Excerpt modified for publication
Posted by Maureen A. Miller at 12:30 AM