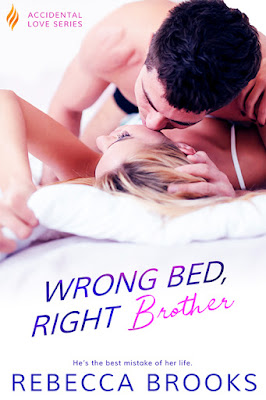 In Wrong Bed, Right Brother, video game designer Amanda has been crushing on her BFF and cowoker, Luke, for years. Luke is moving to L.A., so she finally works up the nerve to make her move. On a weekend getaway with friends, Amanda crawls into Luke’s bed at night and the sparks. start. flying.

But Amanda doesn’t know that Luke and his twin brother, Noah, switched bedrooms. When she sighs Luke’s name in the dark, the lights come on and she finds herself face to face with Noah instead. Holy mortification. This excerpt starts right after Noah realizes he’s just been accidentally half-naked with his brother’s best friend.

When soft hands had reached for Noah in the darkness, he hadn’t thought about it. He’d simply reacted. Felt her kissing him and kissed her back. Felt her body moving and moved with it. Her hands, her skin, her scent, the dip in her lower back as she arched and ground against him…
Shit. He couldn’t think about how good it had felt, or how he’d responded so completely.
He couldn’t deny it. He’d gotten carried away. There was no telling what more might have happened if she hadn’t whispered his brother’s name.
No. Just the reminder that she’d wanted it to be Luke, had been imagining Luke the whole time her hands were running over his back, down his abs, to his fly, her hips moving with him, her breath hot in his ear—
If that wasn’t a massive boner-killer, he didn’t know what was.
“You should probably go now,” he said, his voice strained.
She stood up and walked toward him, arms folded over her chest as though that did anything to hide how her nipples were perfectly peaked. He tried not to stare, but it was hard to look anywhere else—not when the heat of her touch still lingered on his skin.
She got up in his face, leaning close. Not as close as they’d been in bed. But closer than they’d ever stood before.
He thought, for half a second, that she was going to kiss him again. He had no idea what he’d do if she tried. The only answer was to pull away.
But he couldn’t help thinking about that kiss, and the way she’d slid into bed with him. How it had felt in the moments before she’d opened her mouth and ruined everything.
This was Amanda Perkins. This was crazy. He didn’t even like her.
And yet it might have been the best kiss he’d ever had. Not because it was the first kiss that he hadn’t known who he was kissing, the first one that he was too half-asleep to notice or care.
But because it had been good. Soft and sweet and open and wanting—all at the same time.
It’s because she thought I was Luke, a stern voice in his head reminded himself. Of course she’d wanted it. She thought I was somebody else.
And hadn’t he, too? For a moment, when her lips had touched his, he’d been able to forget everything he’d lost. He’d remembered what it meant to be wanted again.
But obviously she wasn’t leaning in to kiss him again. She was leaning in so there could be no mistaking her intention when she told him this was never, ever going to happen again.
“I know you and Luke are inseparable,” she said. “But if you breathe a word to him, I’ll cut off your balls in your sleep.”
Lovely. But she didn’t have to worry. He couldn’t imagine anything more mortifying than admitting he’d kissed Amanda, admitting he’d liked it, all while knowing she’d wanted it to be Luke and not him.
She didn’t need to storm off quite so quickly, like spending another second in the same room as him would be the worst thing in the world. But she was right. They’d pretend it never happened and everything would be fine. It wasn’t like they saw each other that often. She was Luke’s friend, not his.
And he and Luke would be gone soon enough. Six short weeks and it’d be as though this never was.
Even if, for tonight, it wasn’t going to be as easy to forget as he’d hoped. The famous Noah knock-out sleep wouldn’t come, no matter how much he tossed and turned.
He could still smell her on his sheets…all night. No matter how much he tried to deny it, he could still taste her surprising, beguiling sweetness on his tongue.

Giveaway ends 11:59pm EST June 16th. Due to GDPR regulations you no longer need to


submit your email address in the comments. If you have been selected as a winner your name will be posted at the top of the post. You may then contact maureen@JustContemporaryRomance.com to claim your prize. Your email address will be shared with the author/publicist providing the giveaway.
Posted by Maureen A. Miller at 12:30 AM