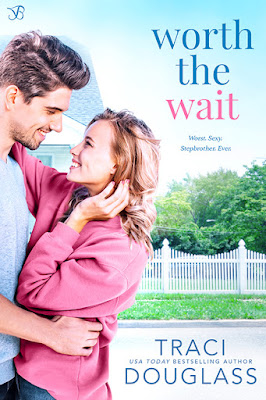 Originally in Worth The Wait, I had Mandy take Alex to a performance art show put on by a friend of hers from high school, named KoZ, in an old abandoned warehouse on the edge of town. Booze, bad decisions, and bawdy fun was had by all. LOL. Unfortunately, this scene/storyline ended up being cut from the final book, but it was still one of my favorites to write. Enjoy!

Mandy Reynolds needs a reset on life in so many ways. Her acting career isn’t exactly where she’d hoped it to be. She can’t even get a job as a germ for a commercial. When she inherits half a house she sees it as a sign and heads home to Heavenly Falls, Illinois. She’ll sell the house, and use the money to take her career to the next level in Los Angeles. That is if she can convince her hard-headed––and stupidly gorgeous–– ex-stepbrother, Alex Noonan, to sell fast.
The last time Alex saw Mandy, she was a gangly teen, who followed him around like a sad puppy. But she’s grown into a smart and funny woman, who is as frustrating as she is beautiful. The fact that they have to live in the house––together––while they fix it up, is one temptation he doesn’t need. And while he’s having fun spending time with her, she’s moving on soon, and he needs time to heal.
Plus, she has no idea he’s got a secret that could put a monkey wrench in all of her plans...

Giveaway:
Have you ever attended a crazy party or show? If so, tell me about it in the comments for your chance to WIN a $10 Amazon Gift Card and a digital copy of Worth the Wait

Giveaway ends 11:59pm EST March 11th. Due to GDPR regulations you no longer need to submit your email address in the comments. If you have been selected as a winner your name will be posted at the top of the post. You may then contact maureen@JustContemporaryRomance.com to claim your prize. Your email address will be shared with the author/publicist providing the giveaway.