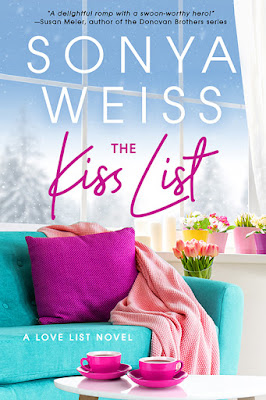 I was working on a different story when the idea for an enemies to lovers book hit which is one of my favorite tropes to work on.

I figured I’d do what I always do when that happens and take a few minutes to jot down the main points of the story so I’d remember it later.

But as I started writing down these notes, the story unfolded so quickly. I could see the characters and their personalities in my mind, so I kept writing and it wasn’t long before the first draft of The Kiss List was done.

All Haley Bowman has ever wanted was her One True Love. But now, with her cousin getting married and Haley back in her small town, the pressure is on. Good thing she’s got a foolproof Kiss List, full of potential OTLs. Her parents knew they were soul mates at their first kiss, so surely Haley will know the same. All she needs to do is...well, kiss each of these guys…
Enter Max Gallagher: bane of Haley’s existence, her nemesis since childhood, and, unfortunately, as a local, her way in with all the guys on the Kiss List. Max wants nothing to do with love and certainly nothing to do with Haley, but he can clear the way for her to get to know the guys on the list. Of course, he wants something in return: to be made a partner in Haley’s family’s business. One kiss for relinquishing her hold-out vote on Max.


But the more time Max and Haley spend together, the clearer it is that there’s a paper-thin line between love and hate. Max will have to decide between the job he’s always dreamed of or the girl of his dreams before his fate is sealed with someone else’s kiss.

The sports bar was dimly lit, crowded, and it was hard to think—much less talk—over the din. Just the way Haley Bowman wanted it. She was tired of the stares, tired of the humiliation she’d endured since her breakup video had gone viral thanks to the celebrity news crew that had been stationed outside the venue at the Hollywood premiere.

Haley wanted to try to forget it—at least for tonight—enjoy the sports talk show, and hope, as the host had mentioned, that her beloved Pittsburgh Steelers would make it to the playoffs. Some thickly bearded guy swaddled in a puffy coat—you’d think it was the bitter cold of January instead of early November—started heckling the television.

He held his beer aloft and slurred, “The Patriots are gonna kick the Steelers to the curb. No doubt, no doubt.”

His arrogance reminded Haley of Max Gallagher, also a die-hard Patriots fan and her nemesis starting the day she’d first set foot inside the elementary school they’d both attended. The day before Valentine’s Day, he’d tugged on her ponytail, and when she’d whipped around in her seat to confront him, the momentum had spun her onto the floor. She’d skinned her knees and cried, and the room had filled up with laughter.

When Valentine’s Day arrived and she’d given everyone in the class a cute “Be My Valentine” card, she’d drawn him one on a torn, muddy piece of paper and said she didn’t want him to be her valentine.

Later, they’d run against each other in student elections (she won), were neck and neck for valedictorian (he snagged that one—probably by cheating), and competed for the same summer job (neither one got it). He’d always known what to say to push every single one of her buttons and always did so with a smirk.

She moved past the drunk and suddenly bumped into him: the very same bane of her existence. Her breath whooshed from her lungs as her stomach drew into a knot. If Max’s looks mirrored his personality, he’d be a slimy blobfish, but one of life’s many unfair deals was that Max was as hot as—no, hotter than—ever. Though she hated admitting that to herself and would die before admitting it to him.

His height forced her head back to look up at him. His brown hair was still thick and long enough to touch the bottom of his shirt collar. It looked as soft as it always had, even though there was nothing soft about the man himself. He either weight trained regularly or worked hard, and the muscles showing below his shirtsleeves attested to that.

They locked eyes, and his sometimes-blue, sometimes green ones regarded her with the same horror that was no doubt showing on her face. Of course, he’d probably heard she was back in town without knowing she’d made herself scarce on purpose.

Since returning three weeks ago, she’d stayed home as much as possible, trying to avoid people, hoping some of the video infamy would die down. Of all the people to avoid, Max was number one. To this day they still had an ongoing battle of one-upmanship, and she’d wanted some time to regroup before the first run-in.

She searched his handsome face with the slight five o’clock shadow and the strong jaw hidden beneath it and remembered the last words he’d said to her: that she was making a mistake by leaving town. Smug Max, always thinking he’s right.

The braggy drunk executed a goofy dance and lifted his beer high over his head. “The Patriots are gonna pour out a beating as sure as this.” He let out a whoop.

Haley watched, transfixed, as the man began to tip the mug.

Max grabbed her and swung her first one way, then another, and she ended up directly under the shower of beer. The cold brew drenched her hair, cascaded down her face, and soaked the sweater that had belonged to her late mother. She stood dripping, her mouth open. Then she snapped her lips together and glared at Max.

He stared at her and then held his hands out like he was warding off an evil spirit. “No,” he snort-chuckled, “I swear. I was trying to get you out of the way. Someone bumped my
arm.”

The drunk shoved the center of Haley’s back, and she lurched forward. “Aww…honey, kiss and make up.” 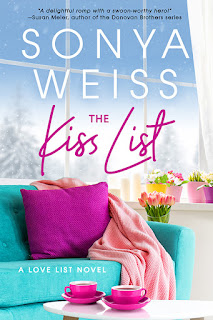 “Hey!” Max scowled and started toward the guy, slipped on the spilled beer, and his arms windmilled. He tried to grab for the bar, grabbed Haley instead, and they went down in a tangle of limbs. She ended up straddling Max, her hands splayed on his chest, while cell phones sprang to life. The picture-snapping clicks rose to a crescendo. Several people recorded.

OMG. No! Not another video. “This is your fault, Max Gallagher!” She tried to scramble up, and her foot—and all her weight—pressed on a point high on his thigh. He sucked in a breath, let out a garbled word, grabbed her foot, and Haley fell backward onto her butt.

The seconds that followed were a chaotic mess. Max writhed on the floor, his face a mask of pain. Haley was lifted up by the bouncer, her arms pulled behind her back, and she was hauled out of the bar. The next thing she knew, she was at the police station and placed in the drunk tank with the door slamming shut behind her.

Arrested on a drunk and disorderly when she hadn’t touched a drop of alcohol. Charged with an assault she hadn’t committed. All because of Max Gallagher.

GIVEAWAY:
Sonya is giving away a digital copy of one of her books to one lucky person leaving a comment or email entry.

Giveaway ends 11:59pm EST February 12th. Due to GDPR regulations you no longer need to submit your email address in the comments. If you have been selected as a winner your name will be posted at the top of the post. You may then contact maureen@JustContemporaryRomance.com to claim your prize. Your email address will be shared with the author/publicist providing the giveaway.