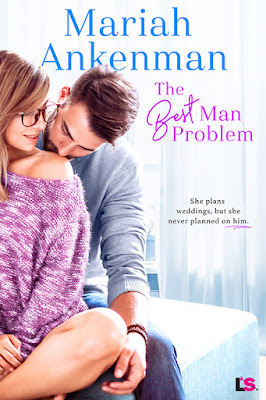 Lilly Walsh is used to keeping things buttoned-up and aboveboard. After all, the last time she hooked up with someone in a wedding party, it nearly cost her her wedding planning business. Thankfully, those rules don’t apply when she meets a handsome stranger in a hotel bar. One bad pirate joke leads to the best night of her life, but come morning, she’s got a wedding to plan.
Lincoln Reid never imagined he’d see the woman who rocked his world last night and then ran out on him ever again. But there she is, planning his best friend’s wedding with the same passion and drive that brought him to his knees. She’s adamant that wedding planner and best man can never mix, but that just means he’s got four weeks to make her see him as more than just a one-night guy. Because he’s itching for more than one night…or five, or ten…


The office computer, the bane of Lilly’s existence, is frozen and there is no tech support available, but lucky for Mile High Happiness the ladies know of a friendly company computer guy…Lincoln. Lilly is reluctant to spend more time with Lincoln, but they need their computer so she allows her friends to call him. He rushes over to fix the problem while her friends conveniently head out to grab food. Leaving Lilly alone with a man who tempts her more than any cheesecake ever could…
****
“There. All done.”
“You fixed it?”
“I fixed it, but you might want to think about upgrading to a newer computer soon.”
Lilly leaned over him, staring at the screen as if it held the answers to life.
“Just like that? You came in here and solved my problem with a few clicks of the keyboard?”
Not quite so simple, but basically. He’d figured it’d be a fairly easy fix; what he couldn’t understand was why she seemed upset by it.
“Yup. Happy to help.”
With a huff, she pushed herself up and started to pace back and forth from the wall to the desk, frustration fueling her every step.
“Of course you’re happy to help. You’re always happy to help. You’re just one helpful, happy guy.”
“Um, did I miss something?”
She ignored him, continuing to pace.
“You can’t even have the decency to be an asshole or have a bad habit. No, you’re just so damn helpful and sweet and sexy.”
That got him to smile. “You think I’m sexy?”
He kind of figured she didn’t find him hideous, since she had slept with him. But it never hurt a guy’s ego to hear an insanely beautiful woman found him attractive. He rose from the chair, risking life and limb—or at least the very real possibility of a knee to the nuts—by moving into her pacing path. She didn’t slow down, didn’t even notice he moved, merely crashed into him. He reached out to grab her arms, steadying her when she would have tumbled.
“Ugh! You even smell good. This isn’t fair, Lincoln. You’re impossible to resist.”
His brow rose as it dawned on him that her anger stemmed from sexual frustration. And he was the source of it. That went a small way to easing his bruised pride from waking up the morning after their amazing night together to find her gone.
“Really?” His gaze roamed over her face, pausing on her lips. Lips he tasted once, lips he tasted every night in his dreams, lips he burned to taste again. “You seem to be doing a pretty good job of resisting me so far.”
Her hands came up—to push him away, he’d bet—but he bet wrong. Lilly grabbed two fistfuls of his shirt. With a frustrated moan, she tugged, pulling him down as she lifted her chin. Her mouth crashed against his, those sweet lips colliding with his own, tasting even better than he remembered.
Surprise kept him immobile for all of 0.1 seconds before he came to life, tugging her by the grip he had on her arms, pulling her into him until he could feel every inch of her soft, heavenly body pressed against his.
Yes! This was what he’d been missing, been craving. This passionate, fiery woman who knew what she wanted and took it. This was the Lilly he met that night at the hotel. The one who brought him to his knees. He’d known she was there, hiding under all that prim and properness. Though he had to admit, the prim and proper thing was hot as hell too. Seemed no matter what this woman did or how she acted, it never ceased to get his motor running.
She moaned, low and deep, the sound causing him to harden to the point of pain. She backed them up, lips still fused as if their lives depended on it, until he felt his back hit the hard, solid wall. He didn’t care. She could bash his head against all the walls she wanted as long as she kept kissing him. Because kissing Lilly was the best damn feeling he’d ever experienced.
Second best.
Being inside her held the honor of the first.
“Dammit!”
Her muttered curse reached him through a fog of lust. One second she had her tongue halfway down his throat, and the next she was gone. Pulled out of his embrace and standing a foot away. Felt like a million miles to him.
“Lilly?” Her name came out shaky, because he was feeling damn shaky. The woman had that effect on him.
Her dark hair was mussed, clothing wrinkled, glasses slightly askew on her sharp nose. She adjusted her frames with a single finger, then pointed that finger at him.
“That did not happen.”
“Okay…” But it had.