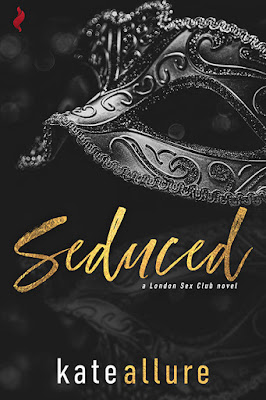 Dame Victoria Whittingstall, appointed by The Queen to serve in the Royal Courts, thought she'd achieved all her dreams.

But there’s always been something missing when it came to sex. On the heels of a break up with Boring Baron, her long time boyfriend, her best friend surprises her with a one night pass to London’s most exclusive sex club.

And completely alive... Club Exotica is straight out of her most forbidden, secret fantasies.

When a handsome stranger finally gives Tori the mind-blowing sex she's yearned for, she knows one taste will never be enough.

It almost makes her forget about the sexy young barrister that flirts with her at court.
But in Club Exotica, betrayal is around every dark corner and lasting love is elusive.

Kate Allure Bio
Kate Allure writes erotic romances that celebrate sensuality, sexual exploration and, of course, true love. Writing for Entangled Publishing and Sourcebooks, her books feature real women meeting handsome professional, working men as they go about their everyday lives—and the fun they have behind closed doors! Her work is “Escapism of the richest, most decadent variety, 4 stars" (RT Book Reviews), and "sizzling and sensual. Intense chemistry, great characterization, and a kinky page-singeing ending will have readers clamoring for more," (Publishers Weekly). Kate’s non-fiction writing includes the Romance Readers Guide to Historic London under the name Sonja Rouillard. Beyond writing, Kate’s passions include traveling and exploring all things sensual with her loving husband.

Seduced, a London Sex Club novel, is set in the rarefied world of legal London. Dame Victoria Whittingstall, a high court judge appointed by the Queen herself, has everything she's ever wanted, everything she worked so hard to achieve — a wildly successful career, a new luxury apartment, and position in society. But she longs for something elusive. For fulfillment in the bedroom. But maybe it's just not in her. When a handsome young barrister flirts with her, pursuing her inside and outside of court, she regretfully rejects him.

But Ian King isn't used to taking no for an answer.

Excerpt from Seduced:
“Go out with me.” His voice had dropped lower, huskier.
His quiet request felt like a command rather than an invitation, and it did strange tingly things to Tori’s insides. Struck dumb, she stood there docilely, yielding to his strange allure.
Everything happened in slow motion. The way he leaned ever closer. His insistent caress on her hand. Everything except for the electric sensation zinging with lightning speed from his hand to hers, up her arm, and outward through her body. Rather than shocking her, the sizzling electricity sealed her hand to his, as if the forces of nature desired their physical connection.
But the sparks between them jumbled her mind. Like individual atoms out of kilter, memories and fantasies flashed through her in an uncontrollable explosion—from illusions of them wildly banging, to the reality of them flirting in court, to worries about the impropriety of her messing around with a colleague, and, finally, to the difference in their ages.
He leaned even closer then, and it started all over again, her mind circling around every doubt and dream she’d had about what sex should be like, what she felt deep inside that she was missing. What she worried she would never experience in her entire life.
Torn between her safe, hard-earned life and her yearning for something more, the vague, unfocused longing transmuted in that moment into the very solid, very real person of Mr. Ian King.
She wanted this man.
Too honest with herself to ignore the truth, she admitted wanting him. Badly. Right this minute. In her life. In her bed. Inside her.
What should she do?
She wanted to say yes.
Scream yes!
He stood watching her. Waiting.
She could feel him willing her to say yes. A thousand times, yes.
He slowly raised her hand. He bent low and kissed the back of it, a polite, gentlemanly thing that felt anything but. His warm, full lips on her skin sent fresh jolts skittering along her nerves. Tingles of pleasure traveled through her at lightning speed straight to her sex, making her pelvis clench. His intense gaze kept her eyes locked with his.
He slowly, deliberately rotated her hand and kissed the sensitive skin of her inner wrist. Fresh electric shock waves snapped through her. Gasping, she wavered, her body swaying against the intense arousal rocking through her. It shocked her out of the sexually induced trance he’d created.
This isn’t right. He’s too young.
But was that really true, or only rules she’d constructed for herself?
Feeling like she was being torn in two—between duty and desire—she opened her mouth and said words she detested.
“Thank you, but I must decline.”
She hoped he didn’t notice her voice’s breathless quality. She felt a need to explain the rejection, but vanity kept her from acknowledging the true reason—she was too old for him.
“You’re a barrister in my court. It would be inappropriate for us to form a liaison. But thank you again for the flower and kind invitation.”
As the words left her mouth, she recalled that it hadn’t felt like an invitation at all—rather more like a command. Why did his authoritative tone affect her so much? Reduce her to a willing suppliant, making her knees weak and her mind mush? In court, she reveled in her leadership role, and it disturbed her carefully constructed self-image that she liked the femininity and willingness this man’s actions inspired in her.
What did it mean?
Unsettled, she puffed her chest and raised her chin. She attempted to sweep past him and put an end to this…whatever it was. She tugged on her hand, but he tightened his grip, refusing her release.
“It’s just a date. One date. So we can see what this is between us.” He grinned, revealing a hint of arrogance. “You know you feel it, the pull that draws us every time we’re in the same room. Don’t be a chicken…Victoria.” His slow drawl of her name made it a sensual caress.
“It’s Justice Whittingstall to you,” she retorted, jerking forcefully on her arm.
He released her hand, but the hotheaded young barrister didn’t give up the argument. “I’m not going to fold so easily. I look forward to more fun sparring with…my lady.” Clearly, he enjoyed this game she had never agreed to play.
Great gobs of giddy fury consumed her. She wanted to stamp her foot at his innuendo-laden emphasis on my. Wipe that smirk off his face with a slap of her hand. Throw herself into his arms to rub herself against him until he was as speechless as she.
Grabbing tight control of her emotions, she forced her voice into a quiet, calm timbre. “I’m not your anything.”
He leaned in and murmured into her ear, “But you want to be.” Pulling away, he whispered so low she had to strain to hear. “Be warned…my fair lady, every time I’m in your court, you will know how much I desire you. You’ll see it in my eyes. Hear it in my voice. And then you’ll feel it…deep inside.”
She gasped, frozen in place, unraveled and weakened as much by his irresistible masculinity as by his phenomenal nerve.
She should be outraged!
But that wasn’t the emotion swamping her.
Drowning her.

“Love, loved every minute of this book. I can't wait for the next book Trapped.” —Goodreads

“I loved how Tori was this powerful badass in the courtroom, and that she had decided to take control of her own sexuality and shed any internal shame over her sexual desires.” —Netgalley

“This book is one of the most original of its kind that I’ve read in a while. I thought I knew where Tori and Ian’s story was going but Kate Allure kept me guessing!” —Goodreads