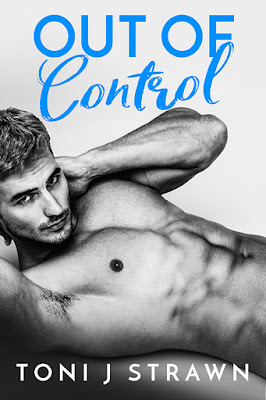 Of all the characters I’ve written, Lila Ward from Out of Control is probably the one who is most like me. Smart. Guarded. Disorganized chaos. When she blows into town, Lila is looking for action and adventure, so flirting with a super-hot guy at the bar seems exactly the kind of trouble she’s looking for. Until Lila finds out he’s the controlling child-hood friend of her new roomie. A strict no-go zone.

Trouble is, Blake Hanlon is all kinds of sexy and Lila is more than tempted. But, as long as her housemate, Mia, is there to provide a buffer, Lila knows she’ll be safe for the night…

Excerpt…
I took another drink and waved the near empty bottle at Blake, smiling sweetly. “I’d love another drink. How about you get this one and I’ll get the next?”

He blinked, a look of irritation pulling at his brow. “Sure.” He stood up. “Do you want anything?” He glanced at Mia.

She flashed a grateful smile. “Yes, please. Another tropical vodka.”

The moment Blake left, I turned on Mia. “Who is he? What is he? And why is he here?” I demanded.

She let out a small laugh. “He’s a bossy son of a bitch, isn’t he? Blake’s my brother’s best friend. He pretty much lived at our place when he was sixteen. Some sort of family trouble. Mom liked having him around because he kept Declan in line.” She made a face.

“So where’s Declan now? Why send Blake to do his dirty work?”

“Declan’s in L.A. I guess he asked Blake to keep an eye on me.” Mia gave an exaggerated groan. “Blake’s a pain in the ass, but he’s always been pretty good to me. You know. Nice. Like another brother. Otherwise I’d tell him to fuck off.”

I glanced over at Blake. He was still waiting to be served at the bar, and still being hit on by anything with breasts. The sight of him standing there, tall, broad shouldered, a glimpse of that perfect ass, made my insides tingle.

“You should tell him anyway,” I said a little breathlessly. That would save me the trouble of having to fight my hormones over him later. They wanted hot and dirty sex. Right now. But something told me tangling with Blake would be a bad, bad idea. She thought him bossy, I called it overbearing, bordering on controlling. No thanks. Been there. Done that.

Mia laughed. “Is that what you were telling him at the bar when I walked in? Blake was eyeing you like a big, juicy steak.”

I blushed, ducking my head so I didn’t have to look at the picturesque view Blake’s backside presented. “I didn’t know who he was then, so don’t worry. Hands off,” I said, waggling my fingers.

“Don’t bother on my account. I think you guys would be good together.” Mia winked suggestively.

“Ugh, don’t say that,” I said on a groan. I would’ve preferred she’d gotten all uptight and demanded I stay away, not given me an open invitation to temptation. Like a bee to honey, my gaze once more strayed to Blake at the bar.

No, no, no. Just because Mia had paved the way didn’t mean I had to take that path...even though I suspected it would be a hell of a ride.

I was saved from any further scrutiny when Mia’s phone started buzzing itself off the table. Frankly, I was surprised we’d been at the bar this long without it lighting up like a Christmas tree. She made an apologetic face and put it to her ear. No surprises. I figured it was her new boss, Nina, yelling down the line.

Mia wriggled in her chair, looking increasingly uncomfortable. “I’ll be there in a few moments,” she said when she could get a word in. She stood up, mouthing, “I’m sorry,” to me.

“Stay where you are,” I hissed. But she was already slinging her bag over her shoulder. “Shit.” The enormity of her abandoning me hit. Me. Blake. Here. Alone. “Mia, you don’t really have to go, do you?” I called after her.

“You’ll be fine. Don’t do anything I wouldn’t,” she threw back over her shoulder.


The first week in my new city starts out about the way I expected. Lots of unpacking. Learning to navigate life with a new roommate. The buzz of excitement that I can be an entirely new person...and throw my restrictive past right out the window.
Who knew everything would change in one night?
Mr. Sexy Businessman and I start chatting at the local bar. Soon chatting turns in to flirting. Flirting turns into kissing.... And ends with the best sex of my life. He is so not my type, he's far too in charge, but I can't deny the explosive chemistry. The affair starts out normal enough, but then we're both feeling totally out of control. Part of me wants to run for the hills... but another, secret part, wants to stay and ride the blissful insanity into the scary unknown.