Addie Carlisle likes to take care of others and make a positive difference in the world. But when she leaves herself without a plus one at a charity auction event, she has to get creative. Sawyer McBain isn’t happy with how his weekend went but being picked up by a pretty driver boosts his day. Until that driver tells him…she has a little favor. 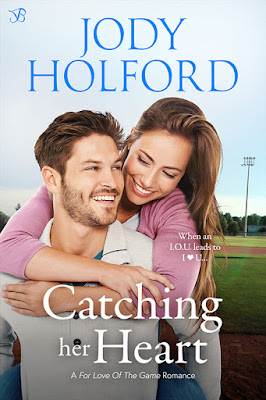 When a beautiful brunette driver meets Nashville Slammers catcher, Sawyer McBain, at the airport, he figures it's his lucky day. Sure, he's usually pretty guarded around people, especially after what happened with his ex, but he can definitely enjoy the car ride. Until she passes his apartment...and keeps driving. All of a sudden the woman seems a lot less like romance material and a lot more like a kidnapper. What gives?
Slammers executive Addison Carlisle needs one little favor. Sure, she may have kinda maybe kidnapped one of her professional baseball players, but it’s for a really good cause. She desperately needs someone high-profile to auction off that night for the multiple sclerosis society she’s chairing, but he insists he wants a favor in return.
Soon Addie and Sawyer are trading completely ridiculous I.O.U.s, like being his plus-one to his grandmother's poker game or keeping each other company at the driving range. But when their agreement goes from flirty to fiery, neither is ready to let their guard down for a shot at love.


Each book in the For Love of the Game series is STANDALONE:
* Covering All the Bases
* Catching Her Heart

Excerpt:
His eyes widened and he pushed himself back against the door. “Tell me you’re not a crazed fan who wants one of my hairs to do some love spell or something.”

Addie nearly choked on her laughter, but she wasn’t entirely sure he wasn’t joking. “That hasn’t really ever happened, has it?”

“You have no idea what people are willing to ask of strangers.”

The way he said it tugged at her heartstrings. Yes, she was asking for something, too, but she wasn’t like all the others. She had a valid reason and a willingness to owe him. Big. If she could just convince him.

Addie took a deep breath. “You have nice hair, but it isn’t what I want, and when I fall in love or a man falls in love with me, I want it to be the real thing. Not because of a spell.”

His eyes widened, his brows arching up. “They don’t really work.”

“How can you know that for sure?”

Sawyer put a hand on the dash, leaned in slightly. “Are we really having this conversation?”
Addison didn’t usually get sidetracked so easily, but this man was…unsettling. In far too many ways. “No. Well, we are, but we shouldn’t be. I just wanted to point out that if you don’t believe in them, you have no reason to worry. But saying they don’t work like you’re some authority on whether they do or don’t, well, unless you’ve tried, you can’t know that.”

He leaned in a little farther and she caught another heady whiff of his cologne. “Lady, Addison, Addie, Ms. Carlisle, whatever you want me to call you, what’s it going to take to just get me home already?”

She squeezed the steering wheel and glanced at the clock. They were going to be late.
“Look,” he said, his tone softer. “Do you know where I live? I’ll sign a ball for your nephew or give you a couple of T-shirts. Can we just go?” He flicked his hand out, gesturing to the road.

Addie shot him a weak, one-sided smile but didn’t put the car in drive. “If you still insist on going home, I’ll take you there. I promise. But I’m in a bind and, you’re right, I do need something from you. I need a really big favor.”

Giveaway:
Jody is giving away an ebook copy of COVERING ALL BASES to one person leaving a comment or email entry.

Giveaway ends 11:59pm EST September 14th. Due to GDPR regulations you no longer need to submit your email address in the comments. If you have been selected as a winner your name will be posted at the top of the post. You may then contact maureen@JustContemporaryRomance.com to claim your prize. Your email address will be shared with the author/publicist providing the giveaway.