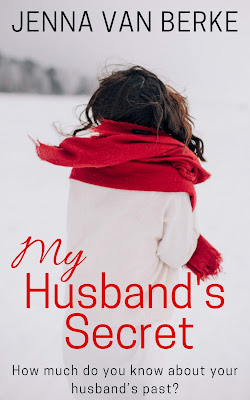 Sometimes my husband says something that startles me. Just a small, passing comment that makes me go “Wait a minute, I never knew you used to watch Futurama.” Yeah, I know, I could have done without that knowledge, but these incidents set my writer’s mind spinning and all of a sudden I’m thinking of the good old He’s-not-who-you-think-he-is-trope.
Back in reality, I know my husband is not a secret service agent, I’m pretty sure he hasn’t murdered anyone or taken on a new identity. Still, there are things we don’t tell each other. I guess it’s part of the unwritten relationship codex: Do not tell too much about your exes. And it makes perfect sense, I mean do you really want to know what pet names your partner used to call his ex, what exactly they did in bed, how much it hurt when they broke up? I don’t. But what if there was a bit more to it than that?

In My Husband’s Secret, protagonist Journey is about to find out.

Excerpt:
James was laying motionless, eyes closed, face pale. The cap he had been wearing for the last couple of months covered his ears down to his earlobes. His emaciated face resembled but a shadow of his former handsome features.
“James,” she took his hand.
His eyes fluttered open and she thought she could see a weak trace of smile for a moment. “Journey.” She guessed more than heard her name from the ragged breathy sound. He tried to say more, but she didn’t understand a thing.
“James, don’t!” she placed her hand on his sunken chest. “Talking tires you. Just rest!” But his eyes were so imploring that she gave in. “Dr. Schwarz told me you want me to meet some guy called Richard in Germany?”
He nodded, his eyes pleading.
“Who is he? You’ve never told me about any Richard, have you?”
He shook his head, eyes apologetic.
“Okay… So, how do I find him?”
He opened his mouth to speak.
She bent her ear close to his chapped lips. The wheezing sound that emerged from his mouth instead of the sonorous voice he used to have, broke her heart all over again and the tears she had tried to ban from her eyes, could no longer be contained. She ignored them and concentrated on listening. “Just wait?”
He nodded.
“You mean, I will find him if I just wait?”
More nodding.

“Okay,” she said slowly. This was getting more and more confusing. “But why do you want me to meet him?”
He motioned for her again.
“Sacred?”
He shook his head and repeated.
“Secret?”
He nodded and looked at her, his sad brown eyes full of regret.
“You mean – you mean you have some sort of a secret?”
He nodded once more, slowly this time. His mouth formed another word. No sound came out, but this time she didn’t need any. ‘Sorry’.
And with that it hit her: This was a confession. A confession of a dying man.

About the author:
Jenna van Berke loves Scandinavian mysteries, Nora Roberts, Margaret Atwood and everything in between.

Working in the hotel industry, Jenna has encountered innumerable honeymooners, cheating husbands and infatuated co-workers, providing her with ample inspiration for her contemporary romance and romantic suspense novels.

She moved to Finland several years ago with her family.

Find her on facebook: fb.me/authorjennavanberke
Sign up for her newsletter and get a free copy of Dark Nights: http://eepurl.com/dHZSYz
Posted by Maureen A. Miller at 12:30 AM