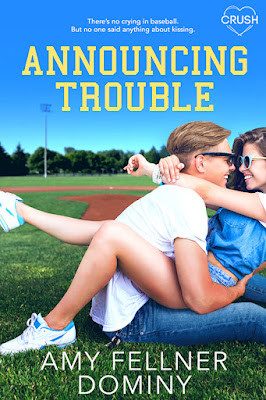 Hey there! I’m so happy to share ANNOUNCING TROUBLE with you. I had a ton of fun writing Josie and Garrett’s story. Josie is strong, stubborn and she has a wickedly sarcastic sense of humor. Garrett is cocky and confident but he’s got a soft heart and a soft spot for Josie—even if she wants nothing to do with him. Here is Garrett trying to convince Josie to work with him as co-announcers for the baseball team. I hope you’ll love these two as much as I do!

“We can win this thing, Walters. I mean, how can we lose? I’m charming and insightful, and you understand the nuances of the game. Plus, you’re a girl.”
I blink in disbelief. “That’s what I bring to this team? I’m a girl.”
“It’s a bonus. Sets us apart. How many others will have a girl who knows her shit the way you do?” His head tilts as he studies me. “Especially one who’s so pretty.”
My jaw drops. “Am I supposed to be flattered? Because that’s incredibly sexist, not to mention patronizing and...”
“Demeaning?” he adds helpfully.   He laughs. “It’s just an observation. Right now our camera is fixed on the field, but there might be opportunity for video, too. And you have nice eyes. Except when you frown and you get these weird slash marks between your eyes.” He points. “Yeah. Like those. I love the vintage tees, but your sandals are hideous. We’ll cut those out of our publicity photo.”
“Publicity photo?”
“We need to submit it with our game tape.”
It’s all I can do not to scream. “There is going to be no game tape. I’m not saying yes.”
“Because I don’t like your sandals?”
“Leave my sandals out of this!”
“That’s my point exactly.” His eyes gleam. “See, we’re already in agreement.”


I may know everything there is to know about baseball, but that doesn’t mean I have to like it. Or like him. Garrett Reeves: sidelined player and the embodiment of everything I’ve learned to hate about baseball. He’s gorgeous, he’s cocky, he’s laser-focused on getting back in the game, no matter the cost.
When he convinces me to call games alongside him, our chemistry heats up the booth. We’re goodtogether, whether I want to admit it or not. I’m finding that I like baseball again, but even worse, I’m liking Garrett. A lot.
But when he has to decide between our future and a new shot at his dreams, I know baseball will win out every time.


Disclaimer: This Entangled Teen Crush book has tons of hilarious banter, lots of sexual tension, and a hero who will throw a wild pitch right at your heart.