Hi. My name is JoAnn Sky, and I write sweet contemporary adult romance, young adult romance with a magical twist, and children’s books. NO HEARTBREAKER REQUIRED is the second book in my Biggest Little Love Story series and takes place in Reno, which is known as the “Biggest Little City in the World”.  NO HEARTBREAKER REQUIRED is a sweet, contemporary romance with a bit of western flair. See, Reno is a mix of several things. Downtown is full of casinos, the edges of town are full of ranches, and the mountains are full of ski resorts! So, each book in my Biggest Little Love Story series introduces a different part of Reno to readers. In NO HEARTBREAKER REQUIRED our heroine is from Reno and a former Olympic-hopeful skier. Thanks for having me today! 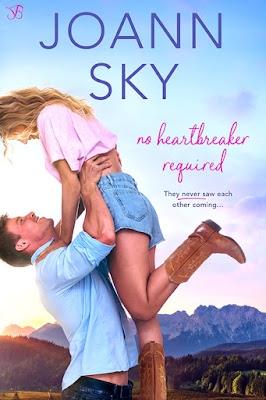 They never saw each other coming…

When an avalanche crushes her world, Olympic hopeful Starr Taylor loses her job, her boyfriend, and worst of all, her confidence. She's working on getting her life back together and moving forward, and it certainly won’t be with Spencer Kensington, the far-too-attractive playboy lawyer she’s forced to play nice with at their friends’ wedding. Unfortunately, Spencer's trip to Reno gets extended unexpectedly, and Starr suddenly finds herself way too close for comfort with the man she's quickly realizing is more than he appears.

Spencer is a tough, no-nonsense New York businessman with a no-commitment rule in the bedroom. But a few days of living with Starr, feeding goats and helping her save troubled teens, has him feeling something he can't identify. In fact, the more Spencer gets to know the surprisingly vulnerable and tempting woman, the duller his superficial life in the city starts to seem. But everything he's worked for is waiting for him, and as Spencer’s flight back home grows closer, he's left wondering if the life he has is really the life he wants.


AMAZON
AUTHOR BIO
JoAnn Sky has written for years as part of her job (business and marketing plans and the like). One day she tried her hand at writing for fun—and liked it. Now she authors adult contemporary romance and young adult romance with a magical twist as well as children's books. She is a two-time Golden Heart® finalist and a member of Romance Writers of America. Originally from the Midwest, JoAnn currently lives in northern Nevada with her husband a.k.a. love of her life, three teenage children, and three crazy rescue dogs.

Visit her at www.joannsky.com where you can sign up for her newsletter (and check out www.dogsandbooks.com for information about her children’s stories).  You can also connect with JoAnn on Facebook in her reader group (https://www.facebook.com/groups/JoAnnSkyJammers/), Twitter (http://twitter.com/JASkyBooks), and Instagram (https://www.instagram.com/JASkyBooks/).

Spencer pushed off the wall and walked toward her, or rather, stalked, his large frame closing in and then towering over her. Mr. Big Bad Lawyer looked positively lethal. The air seemed to lose some of its oxygen, and her lungs tightened. His eyes locked on hers, and every inch of her body tingled. Even her mind fuzzed with static. What were they talking about? He was so close. Why was he so close?
“Don’t sell yourself short. You’re worth it.” His gaze was so intense, so earnest, she almost believed him. Or maybe it was his cologne. She hadn’t noticed it earlier today. Had he just put it on, or were her senses super sensitive tonight? It was masculine, pine mixed with spice. Totally intoxicating. She doubted there wasn’t much he could suggest that she wouldn’t believe—or agree to. Which was… Which was exactly the state of mind she promised she’d never be in again.
Where were these feelings coming from? Even last night, as she “negotiated” his help, she hadn’t been this affected by his closeness.
She pushed up from the swing and brushed past him. Her shoulder grazed his forearm, tingling at the touch-point. She reached the porch banister, grabbed on, and looked out into the darkness, focusing on the shadowy barn in the middle of the yard.
And waiting for the hot tingles in her arm to subside.
This was not happening. She wouldn’t get involved, wouldn’t fall for him. Not him.
“You’re not the only one who can eavesdrop,” she said over her shoulder, forcing herself to think about something else. “I heard you on the phone before dinner. You didn’t sound too happy.” She had recognized the tone in his voice. It was the one he’d used breaking up with what’s-her-name the day of the wedding. Curt one-liners, direct and unforgiving, jabbing with the precision of a boxer—one with killer instincts.
She pivoted to face him, resting against the porch banister. “Who were you knocking out this time?”
A perplexed look crossed his face. “Just making sure my client wasn’t getting cold feet, given my absence.”
“So that was your idea of a pep talk?” He must be a monster to deal with in business. Though, admittedly, a monster she’d want on her side. “I think it’s probably bad karma to beat up your own team.”
His lips twisted. “I’ve been told my karma’s already in poor shape.” He took a step forward. Just one, but it was enough to make her heart ker-thunk into her stomach.
And then he took another one.
“What are you doing?”
He didn’t respond; he just kept coming at her, slowly and deliberately. Her heart wormed its way up to her chest, pounding on her insides, the sound reverberating in her ears. He continued to approach until he was mere inches from her. She took a shaky breath, her lungs filling with the scent of his spicy cologne.
She avoided his eyes and instead focused on his high cheekbones, his square jaw cloaked in a five o’clock shadow. His firm lips. She instinctively licked hers. As if in response, his body shifted closer, subtly.
Subtle shifts of her body determined entire races in skiing. Subtle shifts had been the difference between winning and losing. And lately, all she’d done is lose. She could feel Spencer’s breath on her cheek. Wasn’t it time for things to go her way, for something good to happen? He was here; he had stayed. Maybe a night with Spencer could be good. Or maybe just one kiss...