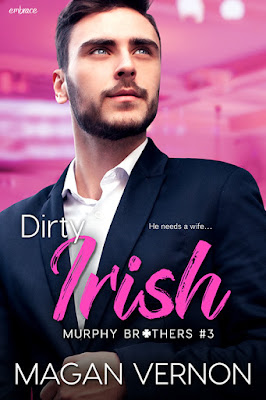 My life has revolved around the two things I've always loved: whiskey and rugby. Now the marriage clause in my Da's will has me putting both on the back burner if I want to save the Murphy's Pub empire and find a wife.


As the last brother to get married, I need a little help, and that's where my sister-in-law's American best friend, Leah, comes into the picture. She could use a little Irish luck after the deceitful things her ex did to her that brought her to Ireland. With her take-no-shite-attitude, she's just the type of girl to help me find a wife.
That is, if I can remember she’s the matchmaker and not the match.
Each book in the Murphy Brothers series is STANDALONE:

* Straight Up Irish
* Irish on the Rocks
* Dirty Irish

Fallon and Leah had happened to pass a magazine stand on their way to the office where Leah picked up a copy where Sean happened to be in it wearing nothing more than a smile and a Rugby ball covering his mickey.

Instead of speaking, my mouth hung open while I stared at Connor and the suited man next to him.
The tall, suited man who I’d just been staring at in a magazine: Sean.
No. No. He wasn’t cute.
I mean, he was cute, just not for me.
But for another girl, he’d be a great catch.
Connor turned his grin toward his wife, but Sean’s heated blue stare was locked right on me. The bugger knew he was cute. A definite playboy, though, since he couldn’t keep a woman.
Not what I needed.
But he did need a woman. A wife. The one I had to find.
“What are you two doing in Jack’s office?” Fallon asked, crossing her arms over her chest as if she could actually ever be mad at her gorgeous Irish man.
“Had a meeting with some of the London franchises and needed Sean in on the call, with Jack gone doing wedding stuff. But, since our older brother didn’t email us the notes, we had to find them in his office before the call. Nice of him to do that, huh?” Connor grinned.
“At work already? Wow, you really are on top of things,” Sean said quietly, approaching me with slow methodical steps.
As he got closer, I tried not to inhale his manly scent of leather and fresh cut grass. My heart was already beating a million times a minute, and so I wouldn’t explode right there, I rounded the corner of an empty desk, putting at least a little needed space between us.
What the hell?
I didn’t have some sort of weird crush on this guy. He was just my new boss and my best friend’s brother-in-law.
“Yeah. Just trying to get all the passwords and everything so I can start getting to work for you,” I said, plopping my purse on the wooden surface, only to have it topple over.
The world moved in slow motion as the magazine tumbled out, open to Sean’s smiling face and rugby ball.
Shit.
I quickly grabbed the magazine and stuffed it back into my purse, but the damage was done. I couldn’t look up, not with my face flaming and my hands trembling.
“Ah, forgot about that article and cover. Doing some research to see if you can find out anything else about me? If you need it, I’m an open book. Just ask me.” He held his arms out to the side, the grin broadening on his face. The very one I had to stop staring at.
Stupid eyes for not being able to look away from the damn man.


“No research. I saw the cover and thought the article might be interesting. But then it ripped when I was grabbed it from the stand and the crotchety old guy made me buy it. But I probably will need to take you up on that getting to know you thing. You know, so I can put it in your dating profiles.,” I said quickly, trying to keep my composure and not explode with word vomit.
Why the hell was I nervous?
So, I had a magazine. I worked for him and was helping him find a wife. Totally normal.
Even if I did plan on using it for a little bedtime reading later. He didn’t need to know that.


Giveaway
Magan is giving away an Irish swag pack or choice of audio book from her backlist.


Giveaway ends 11:59pm EST June 19th. Due to GDPR regulations you no longer need to submit your email address in the comments. If you have been selected as a winner your name will be posted at the top of the post. You may then contact maureen@JustContemporaryRomance.com to claim your prize. Your email address will be shared with the author/publicist providing the giveaway.