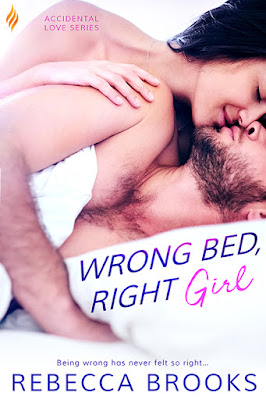 Thanks so much for having me on Just Contemporary Romance! Special Agent Reed Bishop never expects to fall head-first into the wrong woman’s bed. But when he goes looking for his key informant—and instead finds a gorgeous, half-naked ballet dancer—his whole life turns upside down. Reed can’t let Talia stay in her unsafe apartment. But bringing her home with him will only lead to problems…

In this excerpt, Talia has been living in Reed’s room while he sleeps on the couch. It’s hard enough to keep her head screwed on in such close quarters with this giant slab of man muscle always around. It’s going to be downright impossible when she sees how deliciously sweaty he is after a run. Talia’s sworn of dating while she prepares for the role of a lifetime. But maybe a tiny distraction won’t hurt her?

“Hi,” she said, because she couldn’t think of anything else, and because Holy. F**king. Sh*tballs seemed mildly inappropriate.

“Hi,” he said, casual as could be. “Mind if I grab some things before I shower?”

“Not at all!” She said it way too fast. Climbed off his bed way too fast. His enormous, solid body took up the whole doorway, and she almost collided with him in her effort to get out.
She hadn’t heard him leave the apartment. Hadn’t known he’d finally changed out of those sweats. But it wasn’t like what he’d changed into was any better. Shorts. A T-shirt damp with sweat and clinging to his pecs.

He’d clearly gone to the gym, or for a run—whatever guys like him did to wind up looking like guys like him. Something she suddenly very much wanted to find out. His chest rose and fell, his face visibly flushed, his muscles outlined in the V of sweat down his shirt.

But she’d never seen him in shorts before, and his legs were something else altogether. Not the lean muscle of the men she danced with but thick and solid, graspable and strong. All she could think about were her hands wrapping around them while she was on her knees.

“Whoa. Everything okay?” Reed asked as she catapulted herself out the door.

“You don’t have to go anywhere, I’m just getting a change of clothes.”

She sat on the couch, her back to the bathroom so she couldn’t be tempted to stare at him as he headed into the shower. It wasn’t until she heard the door close and the water come on that she finally let her spine relax.

But only a little. There was still the thought of him in there, totally naked now, soaping his body, water running over his head and down his shoulders and his back and his ass and those thighs...

She clutched her phone so tightly her knuckles turned white.

What she needed was a distraction. A real one. Not from her choreography, but from him. 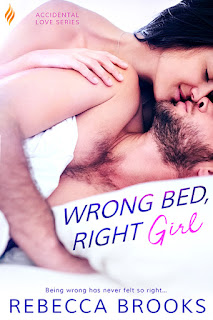 Falling head-first into the wrong woman’s bed was not how Reed Bishop’s night was supposed to go. Now a gorgeous, half-naked ballet dancer was threatening his manhood…with a book. He can’t blame her.

It wasn’t how it seemed—he was just doing his job, tracking down his lead informant, who, unfortunately, took off, leaving him to figure out what to do with her friend. Staying in her apartment was no longer safe.

And that’s how he got himself into this mess.
Now she’s sleeping in his bed while he tosses and turns on the couch.

There are pink tights in his bathroom.

Pointe shoes next to his boots.

He swears he won’t touch her like that…but he can’t ignore his fantasies.
As a tattooed, muscled DEA Agent, Reed’s seen some things. Drug dealers, murderers…He can’t let Talia get close. Even though she’s made it clear they’re both fighting the same hunger. And he definitely can’t use his handcuffs on her…no matter how much she begs.

Giveaway:
An e-copy of Wrong Bed, Right Roommate (Accidental Love Book 1), a best-friend’s-brother romance about Talia’s brother and her BFF.

Giveaway ends 11:59pm EST May 15th. Due to GDPR regulations you no longer need to submit your email address in the comments. If you have been selected as a winner your name will be posted at the top of the post. You may then contact maureen@JustContemporaryRomance.com to claim your prize. Your email address will be shared with the author/publicist providing the giveaway.