With: Jude Sierra and Taylor Brooke 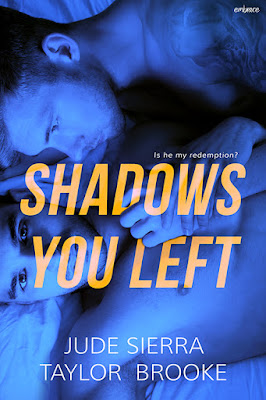 ERIK
The white picket fence.
The happily-ever-after.
That life was never meant for him.
For years he's been bouncing from city to city—from one cage fight to another.
That's his outlet. That's pain Erik can control.
But in Seattle, everything changed.
River's an artist.
He's a pretty boy.
He does yoga.
Someone so soft shouldn't be intrigued by Erik's rough edges.

His life was quiet. He had a simple routine.
Designing tattoos, avoiding drama. Well, mostly.
Then Erik comes along—scarred and dangerous, shrouded in mystery.
A mystery River can't resist trying to solve.
Maybe a secret as dark as his own.
Neither of them expected a relationship so complicated, so intense.
Neither of them expected...each other.
Erik and River are both trying to escape a shadowed past.
But the thing about shadows is: the faster you run, the faster they chase you.


Jude and I are thrilled to share a piece of our newest book, an incredibly personal dark romance called Shadows you Left today! Shadows You Left is a gritty read that pulls on heartstrings, unpacks sensitive topics—addiction, grief, regret and trauma—and is set in Seattle’s beautiful, rainy streets.

They went to separate trucks and ordered their food. Erik thought about everything he’d said at the bar and as they walked. What he should’ve said instead. What he had the opportunity to say now.
You’re stunning. Call me tough guy again. I like your laugh. Fair warning, I ruin everything.
Erik dipped between customers and carried his slice of pizza to where River stood at the bottom of a cement porch outside a boutique shopfront. The nightclub behind the food trucks thrummed. Heavy bass leaked through the walls, and a few wobbly club-goers crawled into a taxi.
The time after midnight was strange and upended. Its honesty crept in, and Erik had to remind himself to look away from River’s lips.
“Pepperoni,” River purred. He snatched a piece off Erik’s pizza and popped it into his mouth.
Erik grabbed a couple of fries and did the same. “They put sour cream on your hot dog?”
“Cream cheese,” River corrected, laughing at Erik’s horror. “Don’t look at me like that, Hollywood. It’s good. You just haven’t been here long enough to know it.”
“I’ve been on this planet long enough to know that cream cheese does not go on hot dogs. That is…” Erik followed in River’s footsteps and let laughter bubble over his lips. “Fucking gross, River.”
“Not gross,” he assured. “Want a bite?”
“Absolutely not.”
“Come on,” River teased.
“No way. I’ll eat your fries, though.” Erik stole another fry and grinned when River yanked his cardboard bowl away.
They managed to stop playing for long enough to eat. Erik’s cheeks were hot. As soon as they threw away their trash and he didn’t have a plate to fidget with, he started picking at the sleeves of his coat. He glanced at his hands, exposed and ugly, marred by scars. The knuckles on his right hand were still healing, but they were far enough along to go without tape. Erik wished he would’ve covered them anyway.
“What do you like about it?” River asked.
When Erik looked up, River was studying his tattooed knuckles. “About what?”
“Fighting.” River’s fingertips twitched toward Erik’s hand but stopped abruptly.
Erik didn’t know. Maybe it was the power, the risk, the control. Maybe it was the money. Maybe it was none of those things or all those things. “The cage is a state of lawlessness,” Erik said. “I get to scream without screaming when I’m in it.”
“There’s an actual cage… You’re not just…” River’s eyes swept to Erik’s face. “Like… Those underground fights people gossip about? You’re a cage fighter?”
Erik leaned against the cement wall that connected the shopfront’s awning to the steps. “Yeah,” he bit out. “Does it matter?”
“No, I just—”
A crack of thunder split the sky. Mist hung heavy in the air as rain hit the buildings and sidewalk and them. Quarter-sized drops splattered windshields and windows, drove smokers back inside, and tore a breathy curse from Erik.
“Shit. C’mon,” Erik said. He grabbed River’s jacket sleeve and yanked him up the steps, onto the porch. The rain kept coming down. Erik kept replaying the way River said cage fighter—with disbelief that might’ve been curiosity, curiosity that could’ve been aversion.
Water clung to the top of River’s mouth. “I just assumed otherwise,” he blurted. “Do you wanna tell me how long you’ve been fighting?”
“Do you really wanna know?” Erik turned toward him and realized they were much closer than he anticipated. River’s hand bumped against his. Erik’s boot touched the side of River’s shoe.
River’s tongue darted over his lip. Erik tracked the movement. He stopped breathing when River’s breath hit his cheek. Bravery took shape in the shadows. He found the top of River’s hand and let his fingers stay there, tracing smooth bronze skin. They were in the place between night and morning, the tempered kind of awake that made this easy.
This. Them.
Erik couldn’t decide which was more attractive, River’s hesitation or his eagerness.