With: Jennifer DiGiovanni and T.H. Hernandez

Congratulations to "Kim", the winner in Jennifer and T.H.'s giveaway. Please contact JUST CONTEMPORARY ROMANCE to claim your prize! 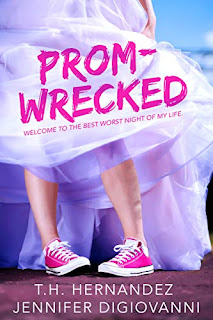 Jen: I love this scene because it shows how Jordon manages to get Catherine to talk through the issues she likes to keep bottle up inside her. He finds a way to connect with her and she finally admits to him what she truly wants—to pursue a role in Wicked. Could this new development in their relationship lead to something more romantic? You'll have to read on to find out!

Theresa: This was one of my favorite scenes from Catherine’s view because it shows her being herself with someone who isn’t Hunter or Owen. Jordon is the first person she allows to see underneath the façade she creates for the world to see.

Catherine’s POV:
His mouth goes slack. “Where did you learn to sing like that?”
I shrug. “Watching tons of YouTube videos, practicing in my shower, and with this software program I read about in the Theater Dreamers forum.”
“I don’t get it.” He shakes his head. “How have you not been chosen for more roles? Hell, for the lead?”
“I didn’t audition for more.”
“Now I really don’t get it. You’re good, and it’s clear you love it. Your face was glowing when you were singing. The only time I’ve ever seen you like that is when you’re performing.”
“You really can’t figure it out?” I take a seat on the floor and cross my legs. “We’re meeting in your treehouse at night, and I had to make an excuse to get out tonight.”
He sits beside me, leaning his head back against the wall. “No, I can’t figure it out. Unless…”
“Unless? Keep going, you’re getting there.”
“Your family doesn’t approve?”
“My dad’s cool with it, but my mom, not so much. She expects me to go into corporate law like she did. She made partner in her law firm, but she’s always wanted to start her own firm and thinks the two of us would work well together.”
“Other than watching you argue over current events in U.S. History better than anyone else in class, I don’t see it. You being a lawyer, I mean.”
I sigh and glance up at him, really noticing his eyes for the first time, wondering if they’ve always been the color of the richest bittersweet chocolate and fringed by lashes that are a couple shades darker than his dirty blond hair. “It’s expected, whether or not anyone can see it, least of all me.”
“I’m sure I’m not the first to say this to you, but it’s your life.”
“No, you’re not, and I know it is, but you don’t understand.”
“You’re right, I don’t.”
I push myself up, but before I can leave, he stands and gently takes my arm, turning me to face him.
“So make me understand.”
“I doubt I can. I mean, look at this place.” I spin to indicate the inside of his treehouse. “You said you wanted to go into drama, and your parents built you a freaking playhouse. I mentioned I wanted to try out for the spring musical freshman year, and my mom told me it was a complete waste of time.”
“Okay, but you did it anyway.”
I nod. “I did. And I loved it. Did my mom come to even one of my performances?”
“I’m gonna guess that’s a no.”
“Nope. Not one. My dad came to all of them, though.”
Jordon runs a hand through his styled hair, leaving it a delightful mess that looks even better somehow. “Look, I get your mom doesn’t support you, but I still don’t understand why you’re letting someone else choose how you live your life.”
“Because…if I don’t do what she wants, I do it on my own. No college tuition, no living at home, I’m out in the world by myself. Untethered. I’m not sure I’m ready for that.”
“Your dad doesn’t seem like the kind of guy who’d let that happen.”
I snort. “You’d think. But she’s got him so whipped, whatever she says, goes.”
“Well, you’re going for Wicked, right?”
I nod. “I am. That’s why I’m here.”
“Well, that’s something.”
“Yeah, but my parents don’t know, and, as you so brutally reminded me, I have no idea what I’m doing. I’ll be the least experienced person there.”
“Then we’ll just have to practice. A lot.” 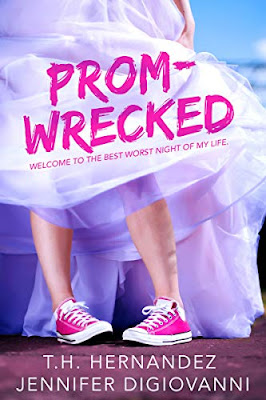 Their prom night ended in a jail cell with forty of their closest friends. But that’s hardly the worst thing that happened to them…
When the principal announces prom is canceled this year, senior Riley Hart is determined to save it. Armed with little more than her own enthusiasm, she ends up working closely with Owen Locklear, who is more than completely off-limits. Because he’s the boyfriend of her ex-BFF, Catherine Reed. Still, Owen knows Riley better than almost anyone, and his charming ideas for turning the prom upside-down and backward win Riley over.
Catherine is willing to join Owen and Riley on the prom committee, but only because her legacy as prom queen is at stake. She’s already suffocating under the weight of her parents’ expectations for after senior year, and compared to that, ensuring prom happens should be easy. At least until everything starts to go wrong.
First they lose their deposit. Then they book a band full of octogenarians. And lose their venue... Twice.
Riley will have an unforgettable teenage experience, damn it, if it’s the last thing she does…

Giveaway:
One lucky person leaving a comment or email entry will win a $5 Amazon gift card!

Giveaway ends 11:59pm EST May 8th. Due to GDPR regulations you no longer need to submit your email address in the comments. If you have been selected as a winner your name will be posted at the top of the post. You may then contact maureen@JustContemporaryRomance.com to claim your prize. Your email address will be shared with the author/publicist providing the giveaway.
Posted by Maureen A. Miller at 12:30 AM