It Started with a Cowboy 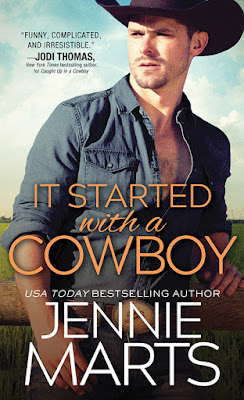 What will this cowboy risk for love?

Colt James is back home on the family ranch, and he's done taking risks. A car accident ruined his shot at a professional hockey career and messed up his love life, and he's not taking a chance on anything that seems too good to be true. Especially not on Chloe Bishop, his nephew's irresistibly charming teacher and the one woman he can't stop thinking about.

Chloe Bishop liked her life the way it was—orderly, structured and safe. Life goes from managed to messy when Colt talks her into helping him coach a hockey team of rowdy eight-year-olds. Being this close to the cowboy she's crushing on is dangerous territory. But when a real enemy threatens Chloe, Colt will do anything to protect her. Even if it means risking himself—and his heart.

"Funny, complicated, and irresistible. Sometimes a cowboy isn't perfect but you got to love him anyway." —JODI THOMAS, New York Times bestselling author

"An appealing story of love rediscovered...enjoy this tender tale."—Publishers Weekly 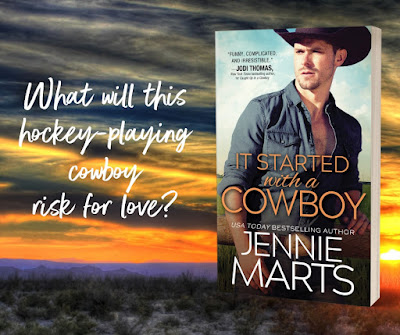 He laughed too, and suddenly Chloe couldn’t hold it back, the events of the day swirling in a crazy haze around her. She’d started her morning with cat yak between her toes, then wrecked her car into a cute cowboy who had put out a fire, washed her dishes, and just made a batch of cupcakes for her. It all seemed too ridiculous, and a gush of laughter bubbled out of her.
She held her stomach and bent forward as she tried to catch her breath. “This day has been something else,” she wheezed as her laughter finally died down.
“Sometimes all you can do is laugh about it,” Colt said. “And you have a great laugh.”
She shook her head. “Stop it. My dad always told me that my laugh sounded like the bark of a seal.”
His eyes widened. “That’s crazy. And mean. And just plain wrong. You have an awesome laugh. It makes your whole face light up.” His gaze dropped to her mouth.
She caught her breath, suddenly imagining how it would feel to have his lips pressed to hers. Would she be able to taste the chocolate of the cake batter on his tongue? Would his lips be as soft as they looked?
“So, are you ever gonna lick that?” he asked, his voice huskier than it had been before.
She blinked and swallowed, moistening her lips as her mouth went dry. “What?” she managed to croak.
“The beater. You know, the one you’ve been holding in your hands for the last five minutes. Aren’t you going to lick it?”
Oh, for the love of cake. Every time he said the words lick it, flames of heat shot down her back. “Uh no,” she said, passing him back the beater.
His forehead creased as he took it. “No? Why not?”
“I don’t really eat many desserts. Too many calories.”
“In a lick of cake batter?”
She shrugged. “It all adds up. And sometimes it’s better not even to try it. Then you won’t know what you’re really missing out on. And you can just imagine it was awful and you didn’t miss something great.”
“What kind of crazy philosophy is that?”
One she’d lived for most of her life. And one she was trying to remind herself of now—-and not just about the chocolate. “When you grow up as a chunky kid, you learn all sorts of crazy philosophies and tricks to keep you from eating.”
His gaze traveled over her body, and she could almost feel the heat of his inspection. “You’re not chunky now. You’ve got a great body.” Pink flooded his cheeks. “I mean, you look great to me. Like, you know, just right. You’re not chunk…er…heavy.” He slapped his hand to his forehead. “Please save me from saying anything else.”
She laughed, although she could feel the heat in her own cheeks at his compliments on her figure. Why had she just told him she used to be a chunky kid? He had to think she was a total dork. Although, maybe this was the kind of thing friends talked to each other about, so maybe he thought it was normal. So why was he blushing? And why did her skin feel like it had just been skimmed over with a light caress? “Okay, okay. I could easily argue, but I’m happy changing the subject too, so I’ll just say thank you and let’s go back to talking about the chocolate.”
“Yes, chocolate.” He grinned, then dragged his finger across the beater, scooping a dollop of batter onto the end, and held it out to her. “Come on. You’ve got to at least try it. Just one taste. Otherwise you really are missing out.”
She peered down at his chocolate--smeared finger and swallowed again. There was no way in heck that she was licking that batter off the end of his finger. It was too intimate, too personal. Too freaking sexy. Just imagining it had warm currents of heat swirling between her legs.
This was not her. She did not lick things off men, especially gorgeous men like Colt James.
Why not? her inner vixen asked. What would it hurt? He offered. His hand was held midair, his finger extended, the smear of cake batter glistening on its tip. All she had to do was lean forward and lick.
Otherwise you really are missing out, he’d said.
How many times had she missed out, just because she was afraid to try, to put even a toe out of her comfort zone? Although it wasn’t a toe. This was her tongue, and possibly her heart.
Shoving that thought aside—-she certainly wasn’t letting her heart get involved with Colt—-she took a deep breath, gathered every ounce of courage she could muster, then leaned forward and wrapped her lips around the end of his finger and sucked the batter into her mouth.
a Rafflecopter giveaway