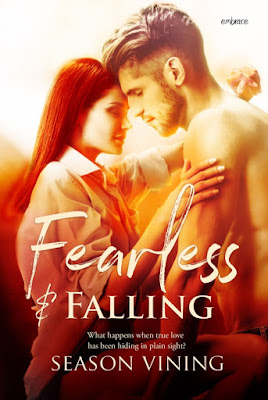 In Fearless and Falling, Angela has been in love with Logan Sawyer since she was a little girl in art class. Now that she's all grown up, she decides there's no time like the present to go after the man of her dreams. There's only one problem—his ex-girlfriend returns to town, throwing her plan off course. Here's a little sneak peek example of keeping your friends close, and your enemies closer—and sometimes discovering they're not your enemy at all.

Excerpt:
I spot Logan at a table near the back of the bar as soon as I walk in and immediately duck my head. I then curse my natural reflex to do that. Before I can chastise myself too much, I notice that the bartender is none other than Wren Freaking Hart. I suppress an audible groan as I slide onto a barstool unnoticed. Why is she here? Why now? And why is Logan looking at her like she hung the damn moon? The whole town knows that she broke his heart when she left, but from the looks of things, I’d say he forgot and forgave.
“Angela Louise, right?” I snap my attention to Wren as she places a napkin in front of me. “Nice rack,” she says, motioning to my boobs. I check my cleavage and tug at the neck of my shirt. I’m not sure whether I’m offended or flattered.
“Thanks. It’s just Angela,” I say. “Millie thinks it gives us that small-town feeling, including our middle names on
our name tags. I think we sound like damn hillbillies.”
Wren laughs and it’s unfair how pretty she is. “What can I get you?”
“I’ll take a Stella.”
“I’m not sure we even have that,” she says, scanning the coolers.
“You do. Coach stocks it just for me.”
I grin as she finds my beer, snaps the cap off and places it in front of me. I take a sip of my beer and swivel around to check out the Thursday night crowd. “Same people, different day. I bet you could take a photograph and in ten years, nothing will have changed.”
“I won’t be here,” Wren says with pride.
I tip my beer in her direction. “Now, that I believe.”
“I found you in our senior yearbook.”
I drop my face into my hand. Just what I need—to relive the horrendous days of high school. “Oh, God. The frizzy hair, the braces, the band uniform—what a horror show.”
Wren taps the bar and my eyes meet hers. “It wasn’t that bad. Look at it this way. I’d say you’re most improved.”
I grin and nod, surprised at my enthusiasm for her approval. “Yeah. Most improved. I’ll take it.”
My eyes slide to him so often, I do it without even thinking. This time when I find Logan leaning against the jukebox, he’s looking back. His gaze holds me and he doesn’t look away. Immediately, the blush creeps into my cheeks and I wonder what he’s thinking. Eventually, one of his friends grabs his attention and I am released. I exhale the breath I’d been holding and spin back toward the bar.
The next hour seems to be a constant loop of torture for me and my insane crush. Though he and Wren keep their distance, I find Logan staring at her when she’s not looking. It’s a longing look that I recognize. It’s one that hurts my jealous heart. When Wren drops off my third beer, I just can’t help myself.
“Looks like you’re back on Logan Sawyer’s radar.”
She rolls her eyes. “I won’t be reliving my youth.”
A glimmer of hope sparks inside me and I press on. “Well, that’s a shame. Every girl in this town from eight to eighty wants to land Sawyer.”
“Even you?” she asks, one perfect eyebrow raised.
“Only since third grade.” I avoid her gawking and pick at the label on my new beer.
“What is it about him that makes every woman go crazy?” she asks.
I sense that she’s being genuine but I don’t understand how she doesn’t see what I do in Logan, especially after being with him for so long. I spin on my stool and watch as he leans over a pool table to take his shot. “He’s sexy in that effortless way,” I say, before turning to face Wren again. “He’s nice to everyone, charming, and seems sincere. He’s loyal to his friends.” I pause, contemplating how much I should give away. My mouth decides to go on without my brain. “He likes to have fun, but he works hard, too. I also think he’s a bit of a secret nerd, which is so hot. Did I mention that body, and how good it looks in uniform?” I feel my cheeks flush and give a shrug—nothing to hide now.
“Wow. All that, huh?” Wren asks.
“I’d only kick him out of the bed to do it on the floor.” 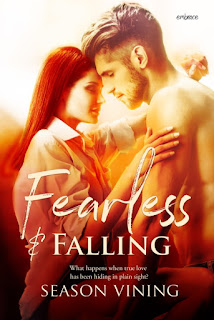 Angela Lavelle has been in love since third grade. A heated argument over superheroes left her reeling in the wake of Logan Sawyer and his charming, know-it-all smile. After a lifetime in the same small town, this art geek still feels invisible to the guy she knows is destined for her. Finally, Angela is ready to give destiny a shove.
Logan Sawyer is adored by the whole town, even taking a place next to his father as a sheriff’s deputy, with aspirations of becoming a detective. When a certain redheaded waitress finally catches his attention, he wonders how he’s been so blind to Angela hiding in plain sight. But there’s the mysterious circumstances of her father’s death tugging at Logan’s detective instincts. Could Angela be the one to break the case wide open? Or will their secrets destroy any chance at a happily-ever-after?

Giveaway:
Season will be giving away a paperback copy of FEARLESS & FALLING to one reader leaving a comment or email entry!

Giveaway ends 11:59pm EST March 24th. Due to GDPR regulations you no longer need to submit your email address in the comments. If you have been selected as a winner your name will be posted at the top of the post. You may then contact maureen@JustContemporaryRomance.com to claim your prize. Your email address will be shared with the author/publicist providing the giveaway.
Posted by Maureen A. Miller at 12:30 AM