FAKE MARRIAGE TO HER BODYGUARD 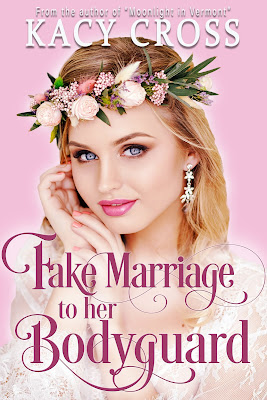 He’s secretly in love with his best friend’s little sister. The same one that’s been off-limits for years. A fake marriage to keep her safe is the worst idea ever. Or is it? FAKE MARRIAGE TO HER T.V. HUSBAND is a fun and flirty story perfect for fans of sweet romance.

Shiloh Anderson is done with men who can’t spell “commitment.” She’d rather focus on opening her own business instead of wading back into the dating pool in hopes of meeting a unicorn of a man who won’t run the other way the moment things get serious.
But that was before someone starts stalking her.
Her brother plunks down a solution in the form of a fake engagement to his best friend, the one man he trusts to keep her safe. Suddenly she has a pretend fiancé who’s treating her like his cherished bride. It’s all an act. Right? Except someone needs to explain to her lonely, commitment-starved heart that none of this is real.

More from the Make Believe Brides Series:
Title: Fake Marriage to her Best Friend
Author: Kacy Cross
Series: Make Believe Brides
Genre: Sweet Contemporary Romance
Release Date: January 3, 2019
Two best friends, one fake marriage and a solemn promise that it won’t get weird—but that was before the kiss that changed everything…
Find out more at: Goodreads | Amazon

Find out more at: Goodreads | Amazon

I write romance novels starring swoon-worthy heroes that you can share with your daughter, the ladies at church and your grandmother without fear because my books never contain bad language, violence or adult content. I live in Texas where I’ve seen bobcats and beavers near my house, but sadly not one cowboy. I’m raising two mini-ninjas alongside the love of my life who cooks while I write, which is my definition of a true hero.
Come for the romance, stay for the happily ever after. My books will make you laugh, cry and swoon–cross my heart.

Excerpt:
"It’s not that big of a favor," Kellan interjected quickly. "So put that out of your mind. I couldn’t sleep at night in my own condo anyway now that I know there’s a serious threat. Let me crash here and we’ll all feel better. That’s all there is to this. The fake engagement thing is strictly to avoid gossip. You know, if you even care about that. Some women wouldn’t.”

The implications washed over her and dang it, her cheeks went hot. “I’m the kind who cares. So I appreciate that. And it is a big favor. Being fake engaged means a lot of hand-holding and adoring looks. I’m not sure how to even do that.”
“If you’re worried about my acting skills,” he said blithely, “don’t. I can hold my own.”
That’s when he gave her one of his adorable lopsided smiles, the same one that had made a mess of her insides yesterday. Okay, so he had that part down pat, no problem.
“It’s not you I’m worried about,” she muttered without thinking and that’s when Kellan figured out where he wanted to stand—entirely too close to her.
Wow, was he tall. She blinked up at him as he took her hand gently in his. It was a strange contradiction for a guy with such obvious strength to have the capacity to be that restrained. Her heartbeat went into triple time as he looked down at her.
“I’m not worried about either of us,” he murmured. “We’ve known each other a long time. We just have to get comfortable with each other and it’ll be fine.”
Easy for him to say. She was the least comfortable she’d been in her life, with Kellan’s deep voice flooding through her and his fingers clasping hers. When had he gotten so devastatingly gorgeous? Or rather, when had she started noticing it? Because of course he looked the same as he always had.
“This is going to put a big hole in your dating life,” she said, which he’d likely already figured out.
“I’m good.”

That told her nothing at all. Was he planning to keep seeing women on the sly? Or was he on the downside of a bad breakup? Suddenly, it felt hugely necessary to dissect the man who would willingly enter such a stupid agreement, all for what amounted to a favor for a friend.
Posted by Maureen A. Miller at 12:30 AM