At some point in your life you may have gone to a conference teaming with people. Sometimes you chat with a stranger or other times you race down the convention hallways trying to make it to a workshop with seconds to spare. At one such event, I once wondered what would happen if I knew more of the people bustling around me. Everyone has a story and we were stuck together for a week away from everyone who knew us. It seemed like the perfect setting to meet new people and maybe, if the opportunity was right, step out of my comfort zone and try something new.

For Caitlyn and Damien, this is exactly where their story starts. As two business rivals, Caitlyn wants nothing to do with a man who is a constant pain in her neck. But soon they realize they’re trapped together at a conference getaway. The proximity of Caitlyn’s nemesis and the allure of being in a place where no one knows her allows new possibilities to surface. After all, there’s only so much a woman can stand when the man who consumes all her thoughts is right across the hotel hall… 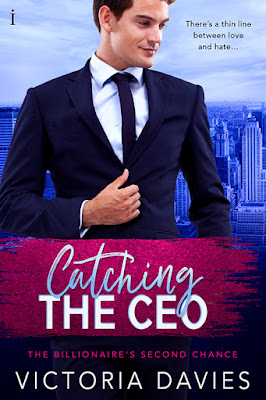 There’s nothing quite like being trapped with the one man you can’t stand...

Caitlyn Brooks can’t believe her luck when her biggest rival turns up at an out of town conference she’s attending. CEO of the company threatening to take hers down, she wants nothing to do with Damien Reid or his billions. But the man behind the boardroom is so much more than she imagined.

Damien can barely believe it when Caitlyn shows up at the conference reception. He has no desire to spend a moment longer with the infuriating woman than he has to. Except he can’t seem to stop his eyes from following her or the unnerving need to ruffle her perfect feathers. When teasing turns to touching, he’s not sure if it’s the best or worst mistake of his life.

There’s no denying their companies are on a collision course and their hearts might not survive the fallout.

What am I doing? She gripped her purse strap a little harder as if keeping her hands occupied would stop the urge to touch him.
Together they navigated the few streets that separated them from the boardwalk. As they walked, she tried to think of a neutral topic to bring up. Instead, she could barely concentrate over the pounding of her heart. Anticipation swirled through her, though she wasn’t even sure what she was hoping for.
Aren’t you?
Turning a corner, they saw the water stretching out before them.
“Pretty,” she breathed, taking in the wooden path built around the harbor. A few strangers meandered around the walk, but it was surprisingly empty. Their own little world.
“I don’t come out here often,” she said to break the silence. “Usually I stay closer to the conference.”
“Then this will be a nice change for you. Something to remember me by.”
“Going somewhere?”
He laughed. “I meant a positive memory.You know, instead of us always being at each other’s throats.”
She smiled. “It’s kind of nice when we’re not trying to one-up each other.”
He glanced down at her. “Think there’s any hope that’ll return with us to Boston?”
“Do you?”
He stopped, leaning up against the rail of the boardwalk.
“It wouldn’t be the worst thing in the world if it did.”
“We can’t be friends and enemies at the same time.”
He reached out, his hand catching hers as he tugged her a step closer. “Says who?”
“Damien…”
He pulled her another step forward.
Step back. Walk away.
Except her body was rooted to the ground, unable to escape his light hold.
“Besides, I never said I wanted to be friends.”
“What do you want?” The question was half taunt, half curiosity.
The small grin that curved his lips was her only warning before he used her hand to pull her off-balance, spinning her back against the rail. He leaned forward, gripping the bar on either side of her to effectively trap her between his arms.
Her heart fluttered as she stared up at him. Doing her best to appear unaffected, she arched a brow.
“You have an interesting way of dealing with your rivals,” she said.
“Usually I skip the taking-them-to-dinner part.”
“Guess I should feel special then.”
His gaze dropped to her lips. “I’d love to make you feel all sorts of things.”
“Trust me, I can beat you in this arena, too.” Unable to stop herself, she slid her hands up his chest to twine around his neck.
“You’ve known me long enough to realize I never walk away from a challenge.”
“Yes,” she agreed, “I have.”
His gaze was knowing when it met hers. “Playing with fire, aren’t you?”
“Here’s hoping I don’t get burned.”
“No promises,” he said, right before his mouth claimed hers.

Author Bio:
Victoria Davies’s passion for writing started young. Luckily she had a family who encouraged believing in magic and embracing imagination. From stories quickly scribbled in diaries, her love of storytelling developed. Since then her characters may have evolved and her plots may have grown decidedly more steamy but she never lost her love of the written word. Writing is not only a way to silence the wonderful voices in her head, but it also allows her to share her passions with her readers.