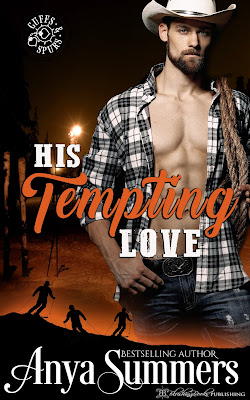 Cora Roberts has a plan: move to a new town and make a better life for herself and her son. As a single mom, she’s not looking for a relationship of any kind. But then she never expected to have the sexy Garrett offer her a night of uninhibited pleasure with no strings attached.

Garrett Brooks never expected Cora’s surrender to his touch to be so sweet – or tempt him to want more than just a single night with her. But as he pursues a deeper relationship with Cora, a threat from his past emerges.

Will Garrett be able to tempt Cora with his love, or will outside forces tear them apart?

A pair of shirtless cowboys settled onto the stools at table ten in her station. Cora approached and couldn’t help but notice that the man with his back to her had one hell of a sexy back. Could a back be sexy? Because this one was. His muscles were defined, flexing with each slight movement. She had an image of herself dragging her tongue along the clearly distinct line of his spine, right down to the two dimples peeking above the line of his low-slung blue jeans.
She inhaled a steadying breath. Clearly her vibrator wasn’t getting the job done if she was having lusty thoughts about a strange man’s back.
The gentleman was a large guy—had to be at least six feet or taller—with dark chestnut hair peeping from beneath his ivory Stetson. His long, muscular, jean-clad legs were tucked beneath the table. The jeans rode low on his hips, even with the brown leather belt circling his waist, and the material lovingly cupped his behind. It wasn’t one of the flat butts so many men had but firmly rounded to give a woman something to hold on to as he thrust.
Clearly it had been far too long since she’d done the deed if she was envisioning holding on to his sexy butt while he had his way with her. She had to be careful or she’d wind up sleeping with someone she had no business getting entangled with.
The hot cowboy’s friend was an equally big fella. Although, for her at least, he was eclipsed by his friend.
Cora plastered a smile on her face as she rounded the table and faced the two Doms.
“Sirs, what can I get for you this evening?” she asked and finally lifted her gaze up to the man’s face. And holy smokes, what a face. Sinfully handsome didn’t even begin to describe her hot cowboy. Nor the fact that one glance at him made her skin feel three sizes too small.
“You’re new,” the cowboy said, and his voice reminded her of melted dark chocolate. Her gaze dipped from his ‘melt your panties off’ face to his brawny shoulders. Viewing them from the front, suffused with lines of ropey muscles, made tingles tighten in her core. Her gaze lowered to his solidly formed chest, the pectorals well-defined and liberally dusted with fine dark hair. Her mouth watered to taste the flat disks of his dusky brown nipples and then follow the singular line of his happy trail with her tongue over his ripcord abs. She inhaled a steadying breath. What the hell was wrong with her? She flashed her gaze back up to his face. His chestnut hair was shaded with hints of deep auburn and the color extended to the trim beard covering his square jaw. But it was the Dom’s eyes, framed by thick chestnut brows, the sharp cobalt orbs reminding her of the deep blue waters off the bay in Seattle, that caused her breath to catch in her throat. They stared at her, glittering with interest as they gave her body the same studious perusal.
“Perceptive,” she replied, as she attempted to reel her pulse back from its fluttering, thumping madness. Just because she found the cowboy sinfully attractive to the point that all her erogenous zones had taken notice, didn’t mean she could act on said lusts. “My name is Cora and I will be serving you this evening.”
“I’ve not seen you around here. New to the area?” the other cowboy said.
She directed her gaze his way. He was equally attractive, with his fawn-colored hair showing beneath the brim of his black hat and hazel eyes that leaned more toward brown with flecks of emerald and gold. His jaw was clean shaven, a bit more angular, and he had a slight cleft in his chin. The cowboy’s chest was certainly noteworthy, a tad leaner, his build more like a swimmer’s, and dusted with light fawn-colored hair. But this guy didn’t make a five-alarm fire ignite in her nether regions. Which made him safe territory, regardless of the fact that his eyes weren’t all that warm.
She addressed him and said, “Yep. Moved here two weeks ago.”
“From where?” Blue eyes asked and she swiveled her head, feeling her high ponytail swish against her shoulder blades. She was drowning in his stare, pin pricks of heat swarming her system. With a simple glance, the man caused every nerve ending to tingle with awareness. Her breath backed up in her lungs and she had to fight the very real desire to touch him. See if his skin would burn at the touch.
“Seattle. Would you two like anything to drink tonight?” she asked, wanting to steer away from her personal life.
“Quite a long way,” the other cowboy said, his stare assessing her, and she couldn’t help but feel he was attempting to divine all her secrets.
He had no idea. She missed her friends, she missed her tiny little house. She missed home. She shook herself. This was home now, whether she liked it or not.
“It is.”
Blue eyes said, “I’m Garrett and this is Jackson. Why don’t you bring us a bucket of Coronas to start?”
“Absolutely. Hungry? Anything to eat?” she asked.
“Not for anything on the menu.” Garrett gave her a lopsided, sexy grin. Laugh lines crinkled at the corners of his intense gaze. And Cora felt a resounding ache in her core. Smooth. This Dom was a charmer. A panty melting charmer, and by the wicked gleam in his cobalt gaze, he knew how to make a woman scream in ecstasy. And if she was reading correctly into his innuendo, sexy Garrett would only be too happy to show her just how exemplary he was in matters of the flesh.

Author Bio
Born in St. Louis, Missouri, Anya grew up listening to Cardinals baseball and reading anything she could get her hands on. She remembers her mother saying if only she would read the right type of books instead binging her way through the romance aisles at the bookstore, she’d have been a doctor. While Anya never did get that doctorate, she graduated cum laude from the University of Missouri-St. Louis with an M.A. in History.
Anya is a bestselling and award-winning author published in multiple fiction genres. She also writes urban fantasy and paranormal romance under the name Maggie Mae Gallagher. A total geek at her core, when she is not writing, she adores attending the latest comic con or spending time with her family. She currently lives in the Midwest with her two furry felines.

Pleasure Island Series
Posted by Maureen A. Miller at 12:30 AM