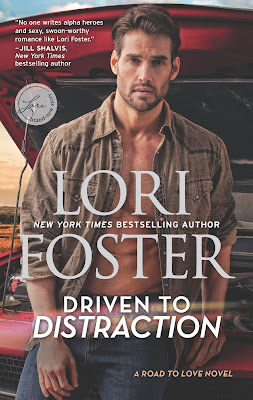 When desire gets this hot, you’d better buckle up…

Mary Daniels doesn’t let anything get in the way of her job acquiring rare artifacts for her wealthy boss. But this particular obstacle—huge, hard-muscled, unashamedly masculine—is impossible to ignore. Stuck in a cramped car with Brodie Crews for hours en route to their new assignment, Mary feels her carefully crafted persona—and her trademark self-control—is slipping, and she won’t allow it.

Brodie can’t imagine what secret in Mary’s past has left her so buttoned-up, though he’d dearly love to find out. Maybe then she’d trust him enough to explore their explosive chemistry. But he needs this job, so he’ll play by her rules and bide his time…until an enemy determined to outwit them strikes and he needs to get close—in every way—to protect her. Otherwise they could lose much more than a precious collectible. They could lose it all.

Excerpt:
Brodie spread his arms wide. “Do I pass muster? Got enough covered up to spare your delicate sensibilities? I don’t need a hat, do I?” He ran his fingers through his messy hair, then down over his throat. “A muffler? It’s damn hot for a muffler but if throats shock you—”
“You’ll do,” she cut in, her tone calm and controlled. Too controlled, damn it.
Sapphire eyes clashed with his, then she sniffed and looked away. “A shave wouldn’t have killed you.”
“How do you know?” He scratched over his scruffy jaw, hearing the rasp of a two-day shadow. “I shave every other week. That’s enough torture for any man.”
Her widened gaze came back to his. “Every other?” “Week,” he filled in for her since she seemed too appalled to manage the last word. Every muscle in his body flexed with interest. Insane. She wasn’t wearing anything sexy—the opposite, in fact. She didn’t make any overt gesture toward him. And her poor hair—she’d drawn it up so tightly it made his temples sympathize.
“And in the meantime?”
He’d been so busy thinking about liberating her hair, it took him a second to catch her meaning. “In between shaves, I have whiskers. Not a big deal, you know. Men are hairy. People—” he silently mouthed, You “—should learn to deal with it.”
Hostility tightened her jaw. “So you won’t have to bother grooming yourself?”
“Hey, I’m groomed. Mostly anyway. I showered, brushed my teeth, sort of combed my hair—”
“Sort of?”
He wiggled his fingers. “Works as well as a comb.” Before he forgot that he was supposed to be polite and nice and all that other sugary shit, he swiped a forearm over the narrow trunk space and the low spoiler at the back of his Mustang to remove the dew. “Contract?”
“Oh.” As if coming out of a daze, she withdrew papers and looked toward the office.
“Still locked up. Charlotte won’t get here till nine, Jack is gone for the day, and we should have headed out five minutes ago.” A subtle jab while withholding a last bathroom break. That’s what you get, Red, for your constant criticisms.
She frowned. “I’m only a few minutes late, and only because I wasn’t familiar with the road that came up here. Yesterday I climbed those grueling rock stairs and I didn’t want to have to do that again.”
“I run those like Rocky, but yeah.” He dropped his gaze to her hips, then to her ankles and those shiny little toes. “Guess I’m a little more muscular than you.”
“A little,” she said, her tone prim.
What an understatement. At about five-two, she was at least a foot shorter than him and no doubt a hundred pounds lighter, with most of her weight being tits and ass. But whatever. She might’ve lacked brute strength, but she made up for it with attitude and confidence.
At a loss as to how to reply to that, she just looked at him.
He gestured at her briefcase. “Contract?” he said again, but what he really meant was: Check?
“Of course.” She approached the car and, with reluctance, laid her briefcase against the trunk with the con- tract on top. She handed him a fancy pen that probably cost more than a tankful of gas.
After quickly reading it over, he saw that it was a standard agreement except for the amount paid and the stipulation that he had a very short time frame to deliver. Interesting that Mary Daniels was listed as an agent to contact for any issues and all communication related to the delivery service.
It meant he still didn’t know who he worked for, only that Red was employed to see the job done.
He twirled the pen. “So who are we delivering to?”
“It’s not a secret, so don’t look so suspicious.”
“Time’s tickin’ away here, Red.” “
Mary,” she corrected, going rigid as the rebar used to reinforce concrete. “I’m employed by Therman Ritter.” Her stiff smile was more like a baring of teeth. “If you sign the contract, you will be employed by him as well.”
Brodie sighed. “Fine.” He scribbled his name at the appropriate place.
She handed him a check, careful not to touch him.  “Half now, half once we deliver.” She folded her hands together. “There’s one more thing.”
Before she could say something that might make him rethink the deal, he tucked the check away in his wallet. Easiest money ever made—so far. With that done, he looked down at her. Even in the dim dawn, her hair shone like a beacon, picking up each and every beam of available light. God, how he’d love to see it down.

About the Author
Lori Foster is a New York Times and USA TODAY bestselling author with books from a variety of publishers, including Berkley/Jove, Kensington, St. Martin's, Harlequin and Silhouette. Lori has been a recipient of the prestigious RT Book Reviews Career Achievement Award for Series Romantic Fantasy, and for Contemporary Romance. For more about Lori, visit her Web site at www.lorifoster.com.