What is it about taboo books... 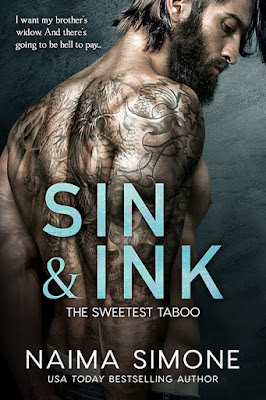 What is it about taboo books that are just so…delicious? I don’t know about you, but when I see forbidden romance, my “Gotta Have” book nerd glands just start working overtime. I think it’s the illicit, “It’s so wrong, it has to be right” nature of it. The sense of urgency because we know they’re going to be found out and the ish is going to hit the fan. And in the ashes, how in the world are they going to find their happily ever after?

It’s all of those things that had me write SIN AND INK. Ex-MMA champion turned tattoo shop owner, Knox Gordon has been secretly in love with Eden Gordon for years. Even while she was married to his brother. But now his brother is dead, and Knox bears the guilt of his death, and Eden is still off limits to him. Because having her could cost him everything.

In the scene below, Eden goes out on a blind date with a man, and Knox is jealous seeing her with another man. The heat between them has already exploded a time or two, but he’s trying to maintain his distance. Good luck with that. :)

*******
“What’re you mad about?” I demand. “That I didn’t get permission before going out with a man? Maybe I would’ve considered telling you my plans if you hadn’t been avoiding me like the effin’ clap the last two weeks.” Like by going out of state with another woman. “But this is the thing. Last time I checked, I’m a grown-ass woman, and I don’t need your okay.”

Knox’s eyes narrow, and his mouth firms into a flat, grim line.

“What? No denial about avoiding me?” All the hurt, confusion, and anger seething inside me bubbles up my chest and into the brittle, cracked sound that some optimistic soul could label a laugh. “Screw this.”

I push past him, but a large hand wraps around my bicep in a gentle but implacable grip that stops me short. In the next second, the solid wall of his chest presses against my back, his thighs columns of marble behind mine.

“No, I’m not going to deny it,” he rumbles in my ear. “I left the f**king state twice to get away from you. It was either put as much distance between us as possible or slam you up against the nearest wall, table, chair, or goddamn floor and f**k you until your voice gave out from the screaming.”

His hand releases my arm and slides over my shoulder and cups my breast through my dress. I whimper, arrows of sharp pleasure darting from the tip to my clenching core.

“But I might as well as have saved the money and the gas. It was just geography. Didn’t stop me from lying there in that bed, imagining your mouth on me. Didn’t prevent me from believing I could still taste you on my lips.” He shifts forward, moving across the room, and I have no choice but to go with him, his huge body moving me like a marionette, and his frame, his hot words, the strings guiding me. “Didn’t keep me from wanting you and despising myself for it.”

I try to smother the caustic sting the last bit of his serrated confession sends blistering through me. He loathes himself for desiring me. Probably resents me, too, although he didn’t admit that.
Before I can reply, my spine aligns with the wall, and he plants his fist on either side of my head, his body looming over me. I’m surrounded by his heady scent, his warrior frame.

“I’m tired, Eden.” The hushed words are so at odds with the gritty language that preceded them that I’m taken aback. Can only stare up at him, struck speechless by the weariness that throbs in his voice and etches his taut expression. Eyes closed, he leans forward and presses his forehead to mine. I have to fight the urge not to brush my fingertips over the sensual curves of his mouth…over the light purple smudges under his eyes that telegraph his battle with sleep. “I’m so f**king tired of fighting.” His lashes lift, and I swallow a moan at the shadows darkening them. But not so dark I miss the sadness in their depths. Or the lust. The burning, glittering lust. “Give me the strength, baby,” he whispers. “Be my strength to walk away.”

That would be the right thing to do—the virtuous, moral thing. But the need blazing through me like an out-of-control wildfire razes morals and virtue to the ground, leaving the ashes scattered in the wind.

Instead, I choose to be his weakness. 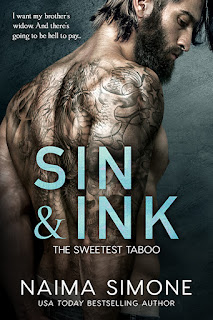 There's sin, and then there's literally going-straight-to-hell sin...
Being in lust with my dead brother's wife pretty much guarantees that one day I'll be the devil's bitch. But Eden Gordon works with me, so it's getting harder and harder to stay away. I promised my family—and him—I would, though.


My days as an MMA champion are behind me. But whenever I see her, with those wicked curves and soft mouth created for dirty deeds, it's a knock-down fight to just maintain my distance. "Hard Knox" becomes more than just the name of my tattoo shop. However, surrendering to the forbidden might be worth losing everything...

Giveaway ends 11:59pm EST Oct. 16th. Due to GDPR regulations you no longer need to submit your email address in the comments. If you have been selected as a winner your name will be posted at the top of the post. You may then contact maureen@JustContemporaryRomance.com to claim your prize. Your email address will be shared with the author/publicist providing the giveaway.
Posted by Maureen A. Miller at 12:30 AM