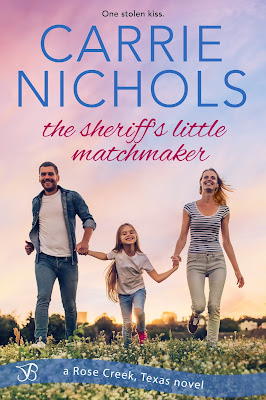 When teacher Sasha Honeycutt kisses a handsome cowboy in a bar on a dare, she never expects to see him again. To her surprise, though, he walks through the door of her classroom for a parent-teacher conference. Sheriff Remy Fontenot might be sexy as sin, but Sasha has no interest in falling for another police officer. Rose Creek, Texas is her fresh start after being “that poor widow.” Only, Remy’s precocious daughter has big plans for the two of them…
After their stolen kiss, Remy knows there's a sexy woman hiding under that school marm charm. When fate—aka his seven-year-old—keeps putting her in his path, he decides to take it as a sign. His daughter needs a mom, and the intriguing, beautiful Sasha is perfect for the role. Not to mention their chemistry is off the charts. Unfortunately, he's set his sights on the one woman in town who has no interest in falling for another man with a badge.

Excerpt:
“I thought maybe you’d tracked me down.” He tilted his head and studied her, his dark-eyed gaze roaming over her.
“Absolutely not. Why would you think that?” Great. Squeaking was not the way to sound indifferent to his looks or charm. Nor did it say she was the one in charge. And she was, dammit, this was her meeting.
“You have to ask?” His gaze landed on her mouth.
Hands at your side. Do not touch your mouth. “That kiss was…was…”
“Electric?”
“I was going to say an aberration.” There. That would put him in his place, and they could get back to the matter at hand.
“Aberration? Oh, I’m hoping that means what I think it does.” He winked.
Is he for real? “Of course not. It means—”
His wicked laugh interrupted her and confirmed he was teasing. And relishing every minute of her discomfort. She fisted her hands. When had she lost control of her meeting? Honestly, Sasha, how about the moment he walked into the room? “Look, we really shouldn’t be talking about that kiss. We need to forget it.”
He gave her a side-eye look. “And how’s that working for you, cher?”
It’s not. “It’s working great. I’d had too much to drink and my behavior was…was…”
He cocked his head. “An aberration?”
The man was impossible. Too handsome for his own good. And if he thought calling her cher in that low sexy tone was— Oh, who the heck am I kidding? Her panties combusted a little each time he said it.
Determined to regain control of the situation, she stepped back, turned on her heel, grabbed the folder off her desk, and marched to the other side of the table she’d set up for this meeting. Taking her seat, she pointed to the child-sized chair on the other side of the table.
He looked from her to the chair and back to her, quirking an eyebrow. She gave him the look she used on unruly students, the look she’d perfected her first year in the classroom.
With a sigh, he settled his large frame—he had to be at least two or three inches over six feet—into the pint-size chair. Look at that, it worked. She straightened the folder so it was parallel to the edge of the table, then made sure the pencils and ruler resting next to it were straight. Now she could conduct her meeting…as long as she didn’t look at his mouth. Or think about that kiss. Or…

Giveaway:
Carrie will be giving away a digital copy of THE SHERRIF'S LITTLE MATCHMAKER to one person leaving a comment or email entry!

Bio:
Carrie Nichols won the 2016 Golden Heart® award sponsored by Romance Writers of America® for her short contemporary which became The Marine’s Secret Daughter, a February 2018 Harlequin Special Edition. The Sheriff’s Little Matchmaker won the 2015 Maggie Award of Excellence from Georgia Romance Writers and is the first in her Rose Creek, Texas series. Carrie was a hardy New Englander but traded snow for central AC when she moved to the Deep South. She loves to travel, is addicted to British crime dramas and knows a Seinfeld quote appropriate for every occasion. Carrie has one tolerant husband, two grown sons and an opinionated cat. To her dismay, Carrie's characters, much like her family, often ignore the wisdom and guidance she lovingly offers. She is represented by Jill Marsal of Marsal Lyon Literary Agency.

Giveaway ends 11:59pm EST Oct. 17th. Due to GDPR regulations you no longer need to submit your email address in the comments. If you have been selected as a winner your name will be posted at the top of the post. You may then contact maureen@JustContemporaryRomance.com to claim your prize. Your email address will be shared with the author/publicist providing the giveaway.
Posted by Maureen A. Miller at 12:30 AM