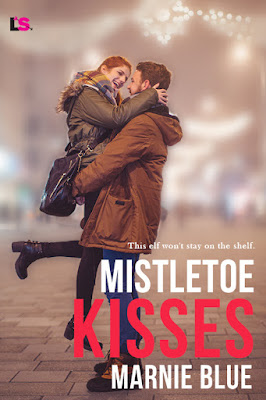 For Officer Justin Weaver, Christmas is the most hideous time of the year. To improve his “holiday cheer,” he’s been put on Officer Kringle duty, collecting toys for the Ho-Ho-Patrol.
It’s a week in holiday hell.
Worse, it comes with an elf—his little sister’s gorgeous best friend—but Lilly Maddox isn’t so little anymore. And as an annoyingly festive reporter looking to make her mark, she’s there to document his every move.
Justin’s always had a thing for Lilly, but he refuses to go there with her. Ever. Not after watching what his mom went through as a cop’s wife. But now that they’re trapped in his squad car, avoiding her just got a lot more complicated…


It was a cold day in November, and it was my day off. I’d gone in to pick up my paycheck at the bookstore where I worked. I was in college—I always needed money. When I came out of the store, there HE was, on the sidewalk: Santa. He’d just set up “shoppe” in the vacant store beside the bookstore where I worked and he was standing there waving at cars going by, trying to entice children in to see him. (Tell me this doesn’t sound a little bit creepy.)

Anyhow, I stopped to talk to him. Of course! Who doesn’t stop to say “hi” to Santa?

I noticed that he had the prettiest blue eyes behind his gold-rimmed (fake) glasses, and a beautifully chocolate-rich voice to go with the Ho-Ho-Ho’s. As I chatted with him (to this day, I’m not sure why I stood there, chatting with him beyond hello), I discovered that underneath the (spoiler alert!) fake beard and suit, he was a guy who attended the same college as me. Amazing. Something compelled me to find out more about the man beneath the red velveteen and acrylic floss, and I did something I’d never done before, or since. I asked him (a guy! A strange guy!) out for a drink after he got off his shift.

Looking back, I think I did it because exteriorly, he was someone I’d known and loved all my life. Moving forward, twenty-nine years later—he still is someone I’m planning to know and love all my life. Because--yes, it’s true. I ended up marrying Santa; we have three elves and our sleigh is a Mazda. He’s not so much into the toy biz and wish granting gig anymore, though. Now he’s a cop, and I’m a cop’s wife.

I’m telling you this because in my new book, Mistletoe Kisses, my hero is a cop—who is dressed like Santa. Better—it wasn’t even my idea, but my editor’s! Funny how life works, isn’t it? Of course, my heroine is nothing like me—she’s tall, for one thing. For another, she’s a journalist. She’s trying to land the job of a lifetime back home with the family she loves. She thought she’d play elf to a jolly St. Nick, but instead she finds Justin, her childhood’s best friend’s brother, driving the sleigh. He’s more Scrooge than Santa, but elf Lilly brings magic and love to his heart…

“I’m never going to live this down,” Justin muttered. But he let her lead him up the stairs to the microphone. Lilly reached to adjust his hat and help him straighten his beard, brushing his lips with her fingertips as she pushed the stray white hairs away from his mouth. His warm breath blew over her palm and up her wrist. Lilly shivered.

“You’re doing a good thing, Justin. Think of the kids. Forget everything else.”

“Easy for you to say,” he said, peering down at her. “You’re not dressed like a centuries old fat guy in a suit that smells just as ancient.”

“Don’t feel bad about how you’re dressed. You’re appropriate to the season. Look at my costume. At least you’re cute in your suit.”

He exhaled and his normal color reappeared. She noted that his ears were beginning to turn red beneath Santa’s white wig. She gave him a nudge. “Now get up there and give ‘em the best ho-ho-ho you can manage.”

But Justin stood still, blinking at her. “You think I’m cute?”

Lilly gazed up into his dark eyes as Justin pinned her with a steady gaze. Her mouth grew dry and her stomach tingled with butterfly wings. “Of course. I’ve always thought you were cute,” she admitted.

He licked his lips beneath his fake mustache. “I’ve always thought you were cute, too,” he said softly. “But I never thought about it much…until now.” 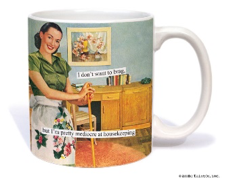 Please go to www.marnieblue.com and sign up for Snarkasm, my mostly monthly newsletter, for more information. Deadline is November 15th, 2018 at midnight EST. Winning caption could win this lovely, sweet and snarky Anne Taintor© mug, suitable for the beverage of your choice!