Congratulations to "Rachel B.", the winner in Carmen's giveaway. Please contact JUST CONTEMPORARY ROMANCE to claim your prize! 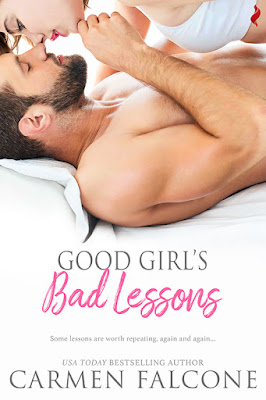 Hi, Just Contemporary Romance peeps! I’m sharing the excerpt of Good Girl’s Bad Lessons. In this scene, delicious Italian billionaire Nico Giordano went to his best friend’s home, when he was out of town. Nico wants to check on Emma, his buddy’s sister, who just had a crappy break-up. What Emma doesn’t know is Nico has been crushing on her for a long time…

(Keep reading and scroll down to enter the Amazon $10 GC Giveaway!)

When they entered the living area, Emma turned on two lamps and turned down the TV’s volume. She reached for the bottle of red wine and gestured it to him. “Want?”
Nico grabbed it from her hand. “Doesn’t it seem like you’ve had enough?”
She shook her head and took it back from him. “Please. I was dumped today. I’m entitled.”
He cleared his throat. “Your fiancé broke up with you?”
“Yeah. Said I suck in the bedroom,” she said, then chugged down the glass. “That’s a complaint I bet you never had.”
“Can’t say that I have.” He went to the kitchen, opened a few cupboards until he found wine glasses, and took one. When he returned, he poured himself some. What the hell could he say to make her feel better? He didn’t get this whole male/female friendship thing, which was why he never wasted time befriending the opposite sex. Still. A flicker of sadness gleamed in her pretty eyes, and he wanted it gone. “Listen, it has nothing to do with you. He’s the loser.”
She rolled her eyes at him, unfazed. “Whatever. It has everything to do with me. Simon’s perfect for me. And I’m perfect for him, if he’s willing to look past his stupid fantasies.”
He glanced down at the red contents in his glass. “He doesn’t know how to stoke that fire in you.”
“It’s not him. Like, I never had an orgasm before. I’m good at faking it. So it can’t be him.”
Poor girl. “Never?”
“Never. But it’s not like I slept with the entire city.”
Like I have. Hmmm… “You don’t need the entire city. You just need one person to make you come.”
“I guess. Sex isn’t really that important for me.”
“How can it not be? Relationships start with sex and end with sex,” he said matter-of-factly. Hell, it probably had been that way between his folks, too. If they’d stuck with sex and not foolish emotions, they wouldn’t have had a f**ked-up marriage and produced f**ked-up children. Not that he’d ever have to worry about making the same mistake. He’d gotten a vasectomy for that exact reason.
“Thanks.”
“I don’t mean to hurt you, but—”
She waved him off, impatient. “Listen, I know you’re the sex king. I get it. But all I want is someone to share my life with. Have kids. Someone who will be there through thick and thin, like my parents’ marriage.”
“I’m sorry Simon wasn’t that guy,” he said, even though he didn’t feel sorry at all.
“That’s where you’re wrong. He is that guy.
“I wish I wasn’t such a bad lay.”
He gritted his teeth. Her low self-esteem about her performance bugged him, and he didn’t even know why. “Dio, you can’t be.”
She shook her head. “Let’s face it. I never even came. Well, it’s not as easy for girls.”
“Not if your man knows what he’s doing. It wasn’t your fault.”
She sighed. “How can you be sure? You weren’t there.”
Enough talking. A mix of frustration and challenge worked its way into his bloodstream, pumping his veins so hard, they were about to pop. He shouldn’t be doing this, but hell, it was too f**king late. “But I’m here now…and I’m about to show you that you can come. Take off your robe, get on the sofa, and I’ll teach you a thing or two about orgasms.” 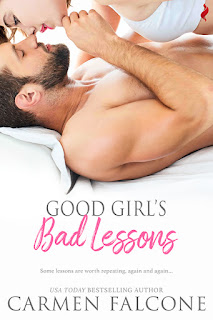 Giveaway:
Leave a comment and enter to win a $10 Amazon GC. Good luck!

Giveaway ends 11:59pm EST Oct. 20th. Due to GDPR regulations you no longer need to submit your email address in the comments. If you have been selected as a winner your name will be posted at the top of the post. You may then contact maureen@JustContemporaryRomance.com to claim your prize. Your email address will be shared with the author/publicist providing the giveaway.
Posted by Maureen A. Miller at 12:30 AM