Love And Other Secrets 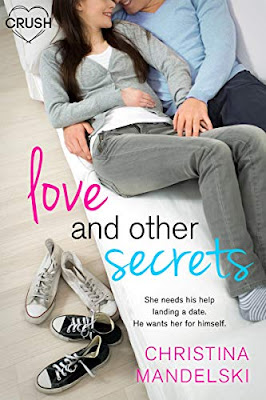 Star lacrosse player Alex “Kov” Koviak has it all. Or so everyone thinks. He’s real good at pretending his life is perfect...until he meets Bailey. The girl challenges him and pushes him and makes him laugh like he’s never laughed before. Their friendship is their little secret, and he’s happy to keep her to himself.
Between school, two jobs, and trying to get into NYU film school, Bailey Banfield has zero time for a social life. But then she meets Alex in her express lane at the grocery store, and their secret friendship becomes the only place she can breathe. She refuses to complicate that with more. No matter how charming Alex can be.
When Bailey decides to film outrageous promposals for her NYU application, she enlists Alex’s help to plan an over-the-top, epic promposal to someone else. Too bad the only prom date Alex wants anywhere near Bailey is him.
For a guy who seems to have it all, he’s about to lose the only thing he’s ever wanted.
Disclaimer: This Entangled Crush contains a cocky lacrosse player in over his head with his secret best friend, unexpected midnight kisses, swoon-worthy slow dancing, and movie-night cuddling that’ll make you ache. You’re going to want an Alex of your own!

We’re at lunch when the questions begin.
“You get asked to prom yet?” my best friend Eli asks right as I take a huge bite of pastrami sandwich. Nora, his girlfriend, is at his side digging into a slice of pie, and not in any gentle, girly way. More like a linebacker at an all-you-can-eat buffet.
I like that about her.
I swallow and lift a shoulder. “Nope.”
With how much everyone talks about it, you’d think prom is a huge deal at our school, but it’s really the promposals that get everyone worked up. As in, they usually go viral.
I’ve never had to plan one because, in three and three quarter years of high school, I haven’t asked anyone to prom, or homecoming, or the eighties dance. Not a single dance. It’s not that I’m against taking the initiative; the girls just always beat me to it, asking me (in some really bizarre ways) to go with them.
It’s only a matter of time before I’m ambushed again, and Eli knows it.
Last year, it was two girls at once in the school cafeteria. One got a bunch of her fellow cheerleaders to bend their bodies into the letters P-R-O-M-?. The other brought in her grandma’s parrot that she’d trained to say “Prom, Koviak?”
It was like the battle to the death of promposals. I felt so bad I said yes to both of them and took two dates, because what else could I do? Have you ever seen someone bend themselves into the shape of a question mark?
Eli snorts. “You know, it wouldn’t kill you to do the asking for once.”
I grunt. I’ve known Eli forever. He’s been my best friend since preschool and thinks he knows everything about me, but he doesn’t know that I’ve been thinking of asking someone.
It’s just…complicated.
Nora stares at me with serious eyes, almost like she knows about my mystery woman, like I knew about her and Eli before they were even a thing.
She can’t, though. No one knows about Bailey.

About Christina Mandelski:
Christina Mandelski loves to bring the characters in her head to life on the page. When she isn’t writing, she spends time with her family, working as a substitute teacher, eating (sweets, usually), traveling and reading (preferably under an umbrella at the beach).  Chris lives with her husband and two daughters in Houston. You can visit her at www.christinamandelski.com.