IRISH ON THE ROCKS

I’m so excited to share this excerpt of Irish on The Rocks with you.

This scene comes from Grace’s interview to be Jack’s assistant. They have an enemies to lovers vibe going on since she was always just the annoying best friend of his little brother, but now they’ve both grown up. She needs a job. He needs an assistant. 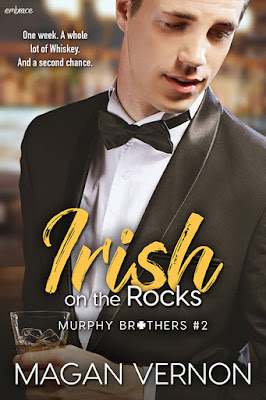 IRISH ON THE ROCKS

My family's whiskey empire needs to keep me as CEO. But thanks to my dad's will, to take my place as rightful head of the company, I need to find a wife. If I could just get my brother Sean's pain-in-the-arse best mate, Grace, out of my head long enough to focus on finding a decent woman.
The woman maddens me, but she's a longtime friend of the family, so giving her a job as my assistant is the only way I can keep everyone off my back. But the more time I spend with her, the more I find myself looking differently at this girl from my past.
Too bad she's decided not to give me the time of day.
Each book in the Murphy Brothers series is STANDALONE:
* Straight Up Irish
* Murphy Brothers

Excerpt:
That left just me and Grace, who wore a tight green skirt and a black blouse that was probably supposed to appear professional but instead had me thinking about the curve of her collarbone and how I wanted to run my tongue along her bare flesh.
What the feck?
Not only was she mouthwateringly sexy, but the smolder and sass that came with her curvy figure had me thinking about anything other than a chat to discuss the position of my assistant.
“Mr. Murphy, first off, I just want to apologize for the other night. I shouldn’t have spilled my drink. Which was totally an accident. I swear.” She pressed her hands together, her teeth slightly clenched and bending slightly at the waist.
Normally I would have grumbled at the apology or blown it off. But with her, something kept me going forward.
“Thank you for your honesty, Ms. Evans. I appreciate that. And I accept your apology. Now please, have a seat,” I said with a small nod, motioning to the leather chair in front of my desk.
She straightened her shoulders before gingerly sitting as if the chair was on fire.
I wasn’t that bad, was I?
“Whatever the reason you’re here, I’m glad you are, and I should apologize for my forwardness at the gala.”
She blinked hard. Hell, if I were in her seat I would have, too. “You’re actually apologizing to me? That’s a first.”
I cocked an eyebrow. “I’m not sure what you mean.”
She narrowed her dark eyes. How did I not notice them before? They were always hidden behind some clunky glasses, but now they were hard not to get lost in.
Feck. Feck. Feck.
This was an interview, not a first date. I had no reason to be staring at her and wondering if it would go against company conduct to ask if we could move this to the pub. Somewhere less stuffy.
“Look, Jack, I know you probably didn’t want me here and you just did this meeting to discuss the position because of my grandfather. I really do need a job and a possible flat of my own for myself and my dog. I may not have experience in this field, but I’m a fast learner. And I promise not to bugger this up.”
She let out a low breath and swore. “Shite. Sorry. I didn’t mean to use those exact words.”
She slammed her fists down on her thighs. “Blast, I did it again.”
I admired her cheekiness.
I would have kicked most women out of my office at this point. But not her. I felt like I owed it to Seamus. The old man always had my brothers and my back, and if he was asking for a favor, I had to at least look into hiring Grace.
Not only were her test scores impressive, her former employer raved that she wished they hadn’t downsized and they had kept her.
This woman was fit for the position, that was for sure, but could I stand looking at her outside my office every day? Wondering what would have happened if that drink had never spilled. If I would have stopped playing her little game and just opened my mouth to say I knew who she was. That she looked gorgeous and I wanted to get her alone and see how soon we could get reacquainted.

About the Author:
Magan Vernon believes that no matter what your story is, everyone deserves a happily ever after and tries to include that in all of her stories. She's had top 100 stories in everything from YA aliens to angsty New Adult tales.When not writing, you can find her on her Texas ranch, trying to wrangle two kids, two dogs, and a colony of whatever other kids or animals ends up in her yard.