Stepping out of the Comfort Zone

Congratulations to "Laney4", the winner in Teri Anne's giveaway. Please contact JUST CONTEMPORARY ROMANCE to claim your prize. Thank you to all who participated!

I’m a crafty person. I like to make stuff. I make jewelry, sweaters, quilts, messes…lots of messes.

A few years ago, a friend of mine, who was training to compete in a women’s fitness/figure event, asked me to make her posing suit. I was like, “Huh?”

She said, “You sew. You can do this,” and she showed me some pictures. We’re talking swimsuits made of fabric no one would ever wear in water, covered in enough rhinestones to drown a whale. I was like, “I make quilts. From crisp, smooth, cotton. This is…this is fancy.”

I had no idea how to make a velvet bikini, but somehow I agreed to try. I spent weeks stitching and re-stitching a few square inches of stretchy silver fabric, and a gallon of glue trying to get those stones to stick. God bless her, she wore the thing on a stage in front of people, and then asked me to make her next one. And another after that. And then she gave my number to some other women, who called me, and paid me real, actual money to make their suits.

It turned into a somewhat lucrative side-gig, and I met a lot of really interesting people along the way.

Fast forward a couple of years, and I decided to take an online class about plotting a romance novel. I had no idea what I was doing, but I liked to read romance, so I thought, “I’ll check it out, see if I can write enough words to make a whole story, and go back to quilting.”
Someone I met in the class suggested we critique each other’s work. Wait. Send my writing to someone else? Well, she was a complete stranger, so I figured I could just get rid of the internet if it got weird. I took another class. And another. One of the workshops I participated in invited us to send in our not-exactly-finished projects.

I thought, “This is dumb. I’ve got important quilting to do. I should be making blankets for homeless cats.” But I took a deep breath and hit send, and tried really hard to forget I’d done that. A few weeks later, I got a call from an editor who liked my voice and wanted to buy my manuscript! Several years later, I’m releasing my sixth romance, and I have quite a few others on deck!

My point is, I stepped out of my comfort zones, tried some things I didn’t think I would be good at, and was rewarded beyond my wildest dreams (okay, not my wildest dreams. In that one, I win a RITA and a Nobel Prize for literature in the same year).

In Accidentally in Love with the Pilot, the hero, Ben, is an introvert. He spends a few weeks in the middle of the most discomforting family in the world, and then has to get REALLY uncomfortable to convince the heroine to step out of HER comfort zone for him (wow, that was a lot of “comfort” in one sentence!).

Giveaway:
What have you surprised yourself by doing? Leave me a comment, and we’ll draw a name for a prize from my secret stash of Awesome Stuff! 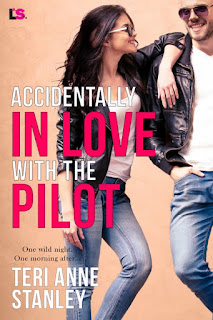 ACCIDENTALLY IN LOVE WITH THE PILOT

Fighter pilot Ben Rutledge loves his solitude. Which means spending a month of leave in overcrowded, over-glitzy Las Vegas isn’t up his alley, especially after his friend ditches him. His first inclination is to bow out, and quickly. Instead, he finds himself sharing drinks—and a whole lot more—with a sexy woman celebrating her birthday. After all, it’s just one night, and he can go back to his quiet life tomorrow.
Megan Shuttlekrump doesn’t have time for a boyfriend, much less a husband. But a night of celebratory drinks with a handsome stranger ends with a ring on her finger—and no memory of how it got there. Her new “husband” is over the top hot, but he’ll be out of her life once his leave is over. As long as they can find out which of the thousand or so chapels in Vegas married them…

Giveaway ends 11:59pm EST Aug. 16th. Due to GDPR regulations you no longer need to submit your email address in the comments. If you have been selected as a winner your name will be posted at the top of the post. You may then contact maureen@JustContemporaryRomance.com to claim your prize. Your email address will be shared with the author/publicist providing the giveaway.
Posted by Maureen A. Miller at 6:20 AM