Congratulations to "Cherisse", the winner in Naima's giveaway. Please contact JUST CONTEMPORARY ROMANCE to claim your prize. Thank you to everyone who participated! 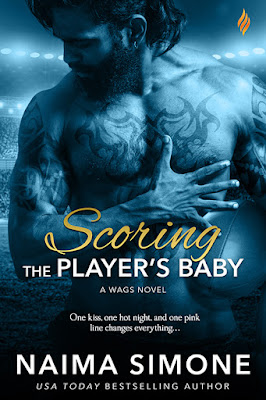 Greetings and hiiii! A huge thank you to Just Contemporary Romance for letting me visit and introduce you fabulous readers to Ronin Palamo and Kim Matlock, the hero and heroine of SCORING THE PLAYER’S BABY, Book 3 in my WAGS series from Entangled Publishing’s Brazen line. I have to admit, a couple of my favorite tropes are intimate strangers/one-night stand and surprise baby. And with Scoring the Player’s Baby, I got to include both in one book. Ronin is exactly what Kim doesn’t want in a man—a football player. So not only does she have a sizzling one-night stand with one but is now pregnant by him. What follows is this fall into love that is bumpy but lovely. I enjoyed writing the two of them so much. And not just because I based Ronin on Jason Momoa. Heehee. Here’s a peek into Scoring the Player’s Baby!

“Since it’s close to Christmas, how about a holiday movie?” Kim suggested. “What’ll it be? What’s your favorite movie?”

Ronin crossed his arms over his chest and glared at her, daring her, beforehand, to laugh. “Love Actually.”

She shrugged. “I’ve never seen it.”

He gasped. Yeah, he did. Her admission was gasp-worthy. “Who hasn’t seen Love Actually? The movie is connection, forgiveness, love, fate, serendipity… What?” He stared at her wide-eyed gaze. “Shaddup. Well, let me have it. What’s your favorite holiday movie?”

“Why am I not surprised?” he muttered, aiming the remote at the TV screen. “We’ll watch your pick first, then mine.”

Hours later, as the credits for Love Actually rolled, he turned to her, waiting for her to praise one of the best movies of all time.

“Well?” he prodded when she remained quiet.

“Now ‘like’ is a stretch.” She did that scrunchy thing with her nose again. “Okay, how is it romantic that the guy is hitting on his best friend’s wife? And if I was Karen, I would’ve slapped the shit out of Harry with that Joni Mitchell CD; I don’t care if he was Alan Rickman. God rest his soul. And yeah, I wasn’t buying the British guy shacking up with the three American women just because of his accent. That was a bit of a stretch.”

Ronin gaped at her, utterly speechless.

“How does it feel?” he finally asked, cocking his head to the side.

“How does what feel?” she repeated.

“When your heart grows three sizes? I’ve always wondered. Does it hurt or just tingle?”
Her face blanked, then she tossed back her head and burst into laughter at his reference to the Grinch. He grinned. That laugh…God, it was terrible and adorable.

“I have a heart. Take John McClane, for example. He blew up a plane full of mercenaries and fired up a runway to save his wife’s life. That’s true love.” She arched an eyebrow.
Damn it, he hated when she was right.

Time to fight dirty. He jumped off the bed, rounded it, and knelt at her side, placing his palms across her slightly rounded stomach. The almost imperceptible bump sent a thrill through him. As did touching her again.

Kim started, sitting straight up on the mattress, but he gently shushed her, bending his head over her.

“Shh. This is a conversation between Peanut and me.” It would be several more weeks before Kim felt the baby move, but he’d read on several sites that babies could hear and recognize their parents’ voices. Maybe not this early, but he liked the thought of it. “This is your dad. Your mom and I can’t wait until you get here, but you have to hang in there and grow before then, so don’t give her a lot of trouble, okay? Except when she says crazy things like insulting my movie choices and T-shirt collection. Here’s a promise: you stay healthy and happy in there, and when you’re finally here, we’ll wear matching Transformers T-shirts to the strawberry festival where I grew up. You’re going to love it. And we love you.”

He pressed a kiss to Kim’s belly then leaned back, glancing up. She stared down at him, her dove gray eyes glistening with tears. Damn, those eyes were going to break him. So lovely, so much emotion. Just. So much.

Rising, he sat on the mattress and pulled her into his arms, onto his lap, and held her, brushing his lips across the top of her head. Jesus, she made him feel. And he didn’t know how to handle it, what to do with it. So he did what came naturally…

“Don’t worry, hala,” he murmured. “I’ll get you a Transformers shirt, too.”

As her muffled chuckle reached his ears, the vise around his chest loosened.

Laughter, he could deal with. The fist squeezing his heart? 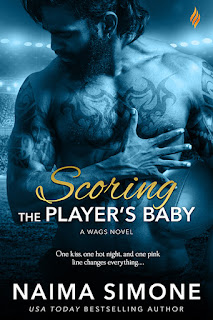 After a divorce from her cheating football player ex, PR whiz Kim Matlock would rather drive a pine tree through her walled-off heart than work at the Seattle Wedding Expo. And the last thing she expects is to be grabbed and kissed breathless by a hot giant of a man looking to fend off a stalker. She doesn't want emotional entanglements, but she can't say no to one scorching night with the sexy stranger.
To her shock, she finds out afterward that a) he's a pro football player, aka her kryptonite, and b) she's pregnant.
But nothing could have prepared her for his response...
Each book in the WAGS series is STANDALONE:
* Scoring with the Wrong Twin
* Scoring Off the Field
* Scoring the Player's Baby

Giveaway:
I’m giving away a $5 Amazon gift card to celebrate the release of Scoring the Player’s Baby! To enter to win, just tell me your fave line from the excerpt!

Giveaway ends 11:59pm EST July 14th. Due to GDPR regulations you no longer need to submit your email address in the comments. If you have been selected as a winner your name will be posted at the top of the post. You may then contact maureen@JustContemporaryRomance.com to claim your prize. Your email address will be shared with the author/publicist providing the giveaway.
Posted by Maureen A. Miller at 12:30 AM