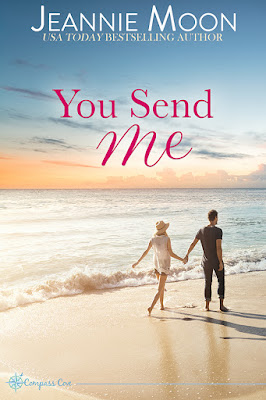 Jordan Velsor didn't want to need anyone. After dumping her cheating fiancé, caring for her sick dad, and nearly being crushed along with her car during a violent storm, she's pretty much at her breaking point. If anyone needs some luck, it's Jordan, but the last thing she wants is gorgeous Nick Rinaldi, her landlord's grandson, hovering over her while she nurses a bad cold. The wounded Navy doctor seems too good to be true... which means he probably is.Nick Rinaldi left the Navy broken and adrift, wondering if he would ever practice medicine again. When his grandparents' tenant is almost killed by a falling tree during a storm, he discovers Jordan is not only in shock, but suffering from pneumonia. Not one to miss an opportunity to play white knight, Nick arrives at her cottage to take care of her during the storm... But the lovely teacher has a a fierce independent streak, and as he learns more about her, he wants to do more than merely help.Can Jordan and Nick let go of their separate pasts and seize their future together?

Prologue
Nine Months Ago
Jordan Velsor expected her last night as a single woman to be spent dreaming about her fairy tale wedding. Instead, she was sitting on the beach behind her cottage, drinking expensive champagne straight from the bottle, and wondering how she could have been so stupid.
Wearing a pair of threadbare yoga pants and gray hoodie, she dug her perfectly polished pink toes into the cool, wet sand and shivered. If it was a normal night, Jordan would have thought the chill was from the cool breeze coming off Jennings Bay. But tonight was anything but normal.
Tonight, Jordan had been played for a fool. She’d become a cliché.
Her whole life—the future she’d had planned, everything she thought she’d wanted—fell apart before she could process how it all happened.
“Jesus. There you are.” Jordan recognized her friend Lilly’s voice right away. “I’ve been searching everywhere for you.”
“Maybe I didn’t want to be found.” Jordan grumbled.
With a flick of her wrists, the old plaid beach blanket Lilly was carrying floated up and then slowly dropped to the sand next to Jordan. “Get up and sit on this. Your ass is going to get all wet.”
So what? Was all Jordan thought. Who cared if her ninety-dollar thong got salty and sandy? No one was going to see it. “Please tell me you brought more alcohol.”
“Yep. And food. I brought cheese and bread from brunch today. Oh, and I stole some cupcakes from the rehearsal dinner.”
It all sounded good, but Jordan had no appetite. “They’re probably going to sue me for calling it all off. I just couldn’t…”
Lilly looped her arm around Jordan’s shoulder. “You owe me no explanation. As far as I’m concerned you did the right thing.”
The sound of the waves crashing on the beach matched the rushing in Jordan’s head. It was an endless thundering noise that rattled her nerves, and it was all caused by the scene she walked in on that day at Chase’s office.
Her perfect fiancé—the tall, blonde and handsome lawyer, the millionaire and favorite son of a prominent family—was caught with his pants down, grinding against his secretary. Her blouse was open, her pencil skirt hiked up to her waist and she had one long leg snaked around his hip.
Jordan’s voice caught in her throat at the sight of her future husband with another woman, and she started backing out of the office. Chase never would have known she was there if she hadn’t bumped into a desk chair, knocking it into a wire cart, which then tipped over.
That foiled her plan of running, because once Chase turned and saw her, the truth of her life as it could be became clear. Things like this happened, Chase explained. And it was time she understood that.
His secretary never came out of the office, and when her fiancé closed the door to shield the woman inside, Jordan’s heart slammed shut.
Things like this might happen in other marriages, but not in hers. It was over.
“Want to talk about it?” Lilly wouldn’t press, but since she was the one who ran interference when Jordan told Chase and his family that the wedding was off, she figured she had a right to know.
“He’s been cheating.”
“I got that much,” Lilly snarled—loyal to the core. “The rat bastard.”
“His family told me I was overreacting. You know, “I’m naïve. He’s a red-blooded man.”
“That’s such bullshit.”
“That’s pretty much what I said.” Jordan took a long pull on the bottle of champagne and realized she’d drained it. “Jeez. Cristal sure goes down easy.”
“So, it’s over.”
“Yep. My dream wedding, my marriage, my life all went ‘poof!’”
“I never liked him.”
That brought a smile to her lips. “I know.”
“Now what?”


“I come back to reality. I stop living in my dreams, and face my life going forward. That’s it. No more romantic fantasies for me. They just aren’t worth it.”

About the Author
Jeannie Moon has always been a romantic. When she's not spinning tales of her own, Jeannie works as a school librarian, thankful she has a job that allows her to immerse herself in books. Married to her high school sweetheart, Jeannie has three kids, three lovable dogs, and resides on Long Island, NY. If she's more than ten miles away from salt water for any longer than a week, she gets twitchy. Visit her website at www.jeanniemoon.com
Posted by Maureen A. Miller at 12:30 AM