Congratulations to "Dee", the winner in Deborah's giveaway. Please contact JUST CONTEMPORARY ROMANCE to claim your prize. Thank you to all who participated!

Hi there! I am so honored to be featured as a guest on Just Contemporary Romance. I’m Deborah Garland and my debut contemporary romance novel was published last summer. It’s been a long road to getting published for the first time but it feels like a longer road to the next release. 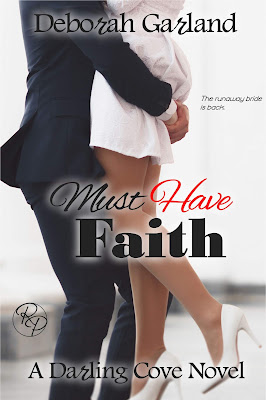 On June 4th, the next book in the series, Must Have Faith, Darling Cove Book 2 was released. The Runaway Bride is Back! Except it’s not your usual runaway bride story. There’s a twist: What if the jilted groom wasn’t a jerk? What if he’s the good guy?
~
Forgiving isn't easy. Forgetting may be impossible.

Greg Mallory isn't the kind of man to wallow just because he was left at the altar. Not when there are plenty of women to help him forget his heartbreak. But as the only Mallory son, he has an obligation to carry on the family name. When Greg's runaway bride returns, his head tells him to keep his distance, but his body and heart are both begging for a second chance.

Faith Copeland bolted out of Darling Cove with a shameful secret and stayed away for ten years thinking Greg Mallory would never forgive her. Coming home means facing her past and Greg. She just didn't think he still had the power to make her melt after all this time.

One moment alone proves their attraction is stronger than ever. Are they brave enough to start fresh? Or will past secrets destroy their second chance at happy-ever-after once and for all?
~
Greg and Faith were childhood sweethearts. They’ve only been in love with each other. They learned how to love by falling in love with each other. So when Faith took off two days before their wedding, they both lost out. They were both broken and empty.

Despite the fact that Faith had left, she too had lost out because of her actions. She didn’t get to marry the love of her life.
I introduced Greg in the first book Must Love Fashion and the response to the handsome cop and brooding jilted groom was something I took note of in reviews for MLF:

“I am wondering if Greg gets his story or happily ever after. Hopefully so!”
“I really hope there is another book about Gwen’s brother’s life because I see some drama there.”
“I’m anxiously waiting for the second book in this series, which I hope is about Gwen’s brother, Gregory. That poor man is in desperate need of some loving!”
I had to give the people what they wanted. Enjoy an exclusive sneak peek at Must Have Faith:

~
Greg gave into the idea that had been flickering in and out of his mind. “Actually…I’ve been thinking about looking into joining one of the FBI’s New York City Task Forces.” He couldn’t imagine saying these words out loud to anyone. Except Faith wasn’t just anyone.

“Really?” With a vigorous smile, she snapped her head back. “That is amazing!”
Christ, did she know how her enthusiasm affected him? It was so hot. He rubbed his forehead, getting his wicked thoughts under control. “It’s just something I’ve been considering.”

She squeezed his shoulder. “You were made for something like that Greg. God. I hope you go for it.”

He appreciated the enthusiasm, except this talk was screaming loud and clear that he and Faith were on different paths. With no chance of intersecting. “Yeah. Well...we’ll see.”

He’d been staring at the wall and hadn’t realized Faith had moved closer to him. When he turned to look at her, her face was inches from his. He could smell the coffee on her breath, a hint of her sweet taste underneath. Her skin hummed with the thunderous desire he too was feeling from having her so close.

Without considering the consequences, he ran his knuckles against her cheek. Her skin flushed with heat and her eyes sparkled. Tips of her white teeth crushed against her lower lip. Full and pink. Kiss me, they had always called out to him.

Greg ignored his better senses and lowered his mouth to hers, dying to taste her. It was a slow descent as his eyes watched hers and then dipped to look at her mouth. With so much happening around them and not knowing if she’d accept the kiss, he rested his mouth against her lips for a moment.

Not exactly kissing him back, she smiled and breathed into his mouth. “What are you doing?”

He smiled back. “I don’t know,” he whispered, but kept the fleshy part of his lower lip on hers.

“Okay,” she said with an adorable shrug.

Author Bio:
Deborah Garland is a versatile author of women's fiction, contemporary and paranormal romances. Her books are about love and the struggles of complicated relationships. The heroines are strong and witty and the heroes fall hard for them.
She lives on the North Shore of Long Island with her husband and two pugs, Zoe and Harley. They like to vacation up and down the East Coast, but her favorite place is on a bar stool on a Friday night with a Grey Goose cosmopolitan, listening to her husband tell her the same stories over and over.

#1
I’m giving away a $10 Amazon gift card to buy a couple of great books. All you have to do is comment below and tell me…what is Greg’s sister’s name? Hint- It IS somewhere in this post. Comments with the right answer, will be chosen at random for the gift card. Check back here at JCR on the 18th to see if you're a winner!

#2
Darling Cove Book 1, Must Love Fashion is up for a Goodreads Giveaway. Enter here!

Thank you Maureen for having me on Just Contemporary Romance!

Giveaway ends 11:59pm EST June 17th. Due to GDPR regulations you no longer need to submit your email address in the comments. If you have been selected as a winner your name will be posted at the top of the post. You may then contact maureen@JustContemporaryRomance.com to claim your prize. Your email address will be shared with the author/publicist providing the giveaway.
Posted by Maureen A. Miller at 12:30 AM