Just One of the Royals 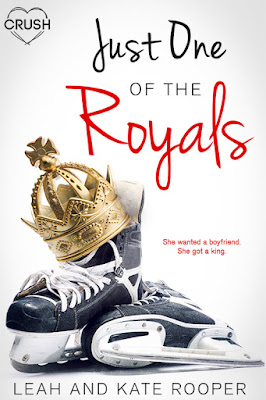 Star hockey player Daniel Sacachelli wants only two things: 1) for the Falcons to win next season, and 2) for his secret — the fact he’s actually the prince of Eldonia — to never make its way to Chicago. But if Daniel keeps avoiding his crown, their family will lose their kingdom forever.
Madison Myong can’t believe that her will-they-or-won’t-they best friend Daniel is really a prince! He’s always seemed more rebel than royal. But now, he needs to clean up his image, fast. Posing as his long time girlfriend, Madison accompanies him back to Eldonia, intending to give Daniel a makeover fit for a king.
Only, the more royal Daniel becomes, the more Madison misses her best friend. And if she does her job right, she’ll lose him forever...

I can’t help but feel a shudder as the thought moves through me--what would happen if the Falcons found out my secret? And not the one about Madison. The other secret, the one that I keep buried deep in my chest.

I feel my hands grow slick under my gloves. The puck whizzes past me and I skid on the ice to grab it. I need to remember who I am--just a Long Island kid in Chicago. Everything else is background noise.

As practice wears on, we all start goofing off a little, seeing how far we can push Coach, it being the last skate of the season and all. Tyler Evans tries to replicate one of Bell’s trick shots and falls on his face. I snatch a sweet goal off a perfect pass from Tremblay just as Coach blows the whistle. We head to the bench. I feel that tightness growing in my chest.

Hockey is over for the summer. Sure, I won’t miss waking up at 5 a.m. for practice, or heading to bed with muscles so stiff, I can barely move. And it will be nice to actually have time to sit down with Ma for a meal together. I’m sure the guys and I will make it down to the rink over the summer. There’s no way Tremblay’s gonna let his team get soft. But it’s not the same. There’s just something about all of us decked out in our jerseys, the roar of the crowd, Madison getting on my case about what I’m eating, even the blare of Coach yelling in my ear--it makes me feel like I belong here. That I somehow have a place in all this.

The chatter of my teammates pulls me out of my thoughts.

“Hey, Sacachelli,” Gerver says as I step off the ice. “What are you doing tonight?”

“My brother’s having a party. Gonna be a lot of hot college girls there.” He flashes a wicked smile. “You should show.”

A college party is exactly my scene…and exactly the kind of thing that keeps getting me in trouble. That keeps making me not good enough for Madison. “Yeah, thanks, man. Think I’m just gonna chill tonight.” Maybe I’ll text Madison and see how her talk went with her parents. Maybe she’ll want to hang out, just the two of us.

“Suit yourself, bro. You know where I live if you change your mind.” Gerver claps me on the shoulder.

The whole team files out but I hold back. I want one last look at the rink, before it’s all over for the summer.

But my eye catches something else.

Someone in the stands.

A huge, hulking man with tanned skin and a shiny bald head. He’s wearing an all-black suit and a pair of dark sunglasses, even though he’s inside.

It looks like my secret has found me all the way in Chicago.

My whole body freezes and I can’t even take in a breath. Because the last time I saw this man in Chicago, he had come to tell me my father was dead.

The man gestures for me to come toward him. I can hear the upbeat voices of my teammates in the locker room, but I’m alone out on the ice. Somehow, my body moves of its own accord, and I skate across the rink, and climb up into the stands.

Each step I take is filled with dread as I go up the stairs toward the man. He stands still as a statue, his mouth a thin line.

My throat is so tight by the time I get to him, I can barely form the words: “E-Eva? What’s wrong with her?”

The man, Dwayne Boulder, says nothing. His massive body looks out of place against the tiny stadium seats. He only gestures to the door at the top of the stands, which leads to the lobby.

I stare at the door, then dart past him, my skates nearly catching on the top step.
When I get to the lobby, my heart nearly stops.

There she is. “Evangeline,” I breathe.

She looks up at me, and smiles that pert, impish smile I love so much. “Big brother.”

A giant grin stretches across my face. I grab her in my arms and lift her up in the air. “What are you doing here?” I say, as her arms tighten around my neck. “When I saw Dwayne, I thought something was wrong…”

“Oh, you know Dwayne,” she says. “He had to make sure your teammates weren’t actually foreign agents, or anything like that.” Her posh accent always takes me off guard when I haven’t been around her in a while.

I pull back so I can take her in. Every time I see her, she looks so much older. I guess that’s because I only see her once a year. Man, for sixteen, she certainly looks grown up. Her reddish-brown hair is swept up in a bun, and there’s enough jewelry around her neck to fill a treasure chest.
“Come on,” I say, “what are you doing here?”

Eva has never once come to visit me in Chicago. I don’t think she’s ever left Europe.
“Can’t a loving sister come watch her big brother play,” she says, giving a smarmy grin, “whatever game this is?”

“You stay around, and I’ll get you out there with a stick in your hands.” I smile and poke her ribs. “If Dwayne doesn’t kill me first.”

She looks behind me and I can feel his presence there. “Maybe some other time, Dan-Dan.” Her amber eyes glint mischievously.

As happy as I am to see my little sister, something gnaws in my gut--a hunch she’s not just here for a visit.

I throw an arm around her shoulder. “Seriously though, Eva. What are you doing here?”
She wiggles out from under my arm and walks ahead of me. “I’ve…I’ve come to bring you home.”

My whole body freezes. “Eva. I am home.”