Exclusive Excerpt: When You Knew by Jaime Beck 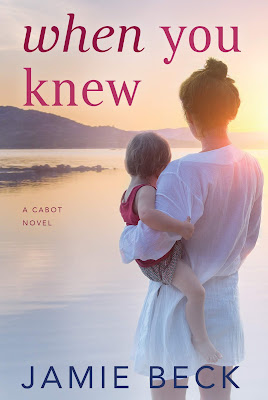 Gentry Cabot’s rebellious life comes to a screeching halt when a one-night stand leads to a sobering new reality: motherhood. Exhausted and overwhelmed, the former wild child struggles to raise an infant on her own. After a lifetime of feeling like the odd Cabot out, Gentry knows that what her son needs most is family. For his sake, she plans to rebuild bridges with them, but first she needs a little help on the home front.

Humanitarian worker Ian Crawford has devoted his life to service. Forced to temporarily return stateside, he’s eager to head back to Haiti to expand the nonprofit he just founded in his late father’s honor. He can’t do that without money, so when Gentry offers a hefty paycheck for a short-term gig as a live-in nanny, he can’t afford to say no. Ian expects to deal with a barrage of privileged problems. What he doesn’t expect is how quickly being a makeshift father transforms him.

Despite his growing attachment to Gentry and her child, Ian still has his dreams, and Gentry wants a full-time dad for her son. When the baby’s father reenters the picture, will Gentry and Ian embrace the family they’ve formed or end up worlds apart?


“Sorry. Just thinking about my own plans.”

Her green eyes lit with interest as she leaned forward and rested her chin on her fist. The glass door behind her became a mirror. In its reflection, they looked like a couple on a date. “What plans?”

“My father’s friend Archer Cooke and I recently formed an NGO in Haiti to train locals to become EMTs. We have one local, Stanley, on board with us at this point, and we’re working with local hospital administrators to structure something that will complement its service. Teaching people basic lifesaving skills will improve lives in communities with little to no access to adequate health care. Our big challenge now is getting vehicles and an ongoing source of supplies.”

“Wow.” She sat back again. “You want to live there, like … full-time? Isn’t it dangerous?”

“I’d avoid pockets like Carrefour and Cite Soleil … Martissant. We’re setting up on the coast, in Jacmel.”

“I know zip about Haiti … other than that it’s hot and poor.”

“Very poor. They have a saying about wishing they were lucky enough to be dirt poor. Deforestation started way back with the French and continued through the mideighties with the clear-cutting of the Haitian-Dominican border, so dirt gets easily washed away during storms, which makes it hard to grow fruit and other food. There’ve been efforts to cultivate more trees in recent decades. It’s having some impact, but poverty is a huge problem.”

For a second, he flashed to a memory of some young aides tossing candy at kids in the street. He’d been smiling at their generosity until his father had pointed out the shop vendor sitting outside his empty store, sun glaring off his sweaty face, watching potential sales die. Ironically, many who went to help only made things harder and took resources from those in real need.

“Can’t you manage that without living someplace so unsafe and unhappy?”

Safety. Happiness. These were things he hoped to give others, so he would make the sacrifice. It was his privilege to do so, in fact. But he didn’t want to preach or talk about his dad—his bittersweet connection to Haiti. The place—grave—where he felt both closest to, and yet most distant from, his dad. “I’ll manage.”

He shrugged, hoping to sidestep her probing. Demonstrating a talent for intuition, she shifted directions.

“Do you speak French?”

“A little. Most locals speak Haitian Creole. I know enough to get by, but I’m getting better. Stanley’s been teaching me when I’m there.”

Her eyes twinkled. “Say something.”

“Ooh, kinda sexy.” She smiled. Hearing her call him—and the way he sounded—sexy roused him intolerably. “What’s it mean?”

“Where does it hurt?” He forced himself to think of an instance where he’d asked that question of a patient in order to move his thoughts away from Gentry’s low voice saying the word “sexy.”

“Oh.” Her smile fell. “I guess most of what you know has to do with sick people.”

He nodded. Not sexy at all. Thank God.

She stared at him now, pushing her empty plate aside. “Are there many women who work there?”

“I’m wondering if you get lonely. This life plan of yours won’t make finding love very easy. But I guess you already know that, or you wouldn’t be homeless now, would you?”

He wasn’t ready to discuss Farrah or his love life. The quickest way to shut down that conversation would be to turn it around on Gentry. “Being a single mom must be pretty lonely.”

“That’s not the kind of love that you’re talking about.” Before he could stop himself, he added, “In fact, this conversation makes me wonder about Colt’s dad.”

“Yeah, well … get in line.” She smirked and finished her wine.

National bestselling author Jamie Beck’s realistic and heartwarming stories have sold more than one million copies. She’s a 2017 Booksellers’ Best Award finalist, and critics at Kirkus Reviews, Publishers Weekly, and Booklist have respectively called her work “smart,” “uplifting,” and “entertaining.” In addition to writing, she enjoys dancing around the kitchen while cooking, and hitting the slopes in Vermont and Utah. Above all, she is a grateful wife and mother to a very patient, supportive family.

Fans can learn more about her on her website: www.jamiebeck.com, which includes a fun “Extras” page with photos, videos, and playlists. She also loves interacting with everyone at www.facebook.com/JamieBeckBooks.