Undercover With The Nanny


Congratulations to "Colleen C., the winner in Cathy's giveaway. Thank you to all who participated!

Happy Mother’s Day, everybody! I hope you’re enjoying your day and are doing what you love doing: reading! My latest release, Undercover with the Nanny, is a spicy novel full of humor, suspense, and of course, romance. I made myself blush when I was writing it, because Kate Munroe and Sawyer Hayes ooze sex appeal. I hope you’ll participate in my Giveaway. I also hope the excerpt makes you want to read more. Enjoy!

GIVEAWAY ALERT:
One lucky person will receive an ARC of Undercover with the Nanny for leaving a comment. 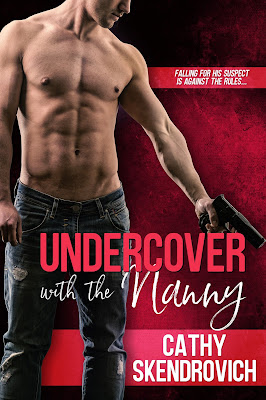 UNDERCOVER WITH THE NANNY

DEA agent Sawyer Hayes came to California in search of a drug cartel leader who slipped through his fingers in El Paso. The link to finding him is Kate Munroe, a nanny for one of his henchmen. The problem? He didn’t expect to be so drawn to a possible suspect. How is he supposed to do his job when his growing feelings for her are clouding his judgment?

Interior designer Kate Munroe’s life is a train wreck. Her parents’ deaths left her with their mounds of debt, she can’t get a job designing even a cubicle, and she’s bunking in her best friend’s spare bedroom. To make ends meet, she’s a nanny to a lonely little boy whose rich father works all the time. Romance is not on her radar. But her hot new neighbor could change her mind, with his broad shoulders and Southern charm. Too bad his secrets could destroy her.

EXCERPT:
Was he stalking her? Kate stepped back from the truck window and studied Sawyer Hayes. He didn’t look like a bad guy. She’d already established that he was gorgeous, and up close, her first impression was confirmed. Tiny white lines radiated from the corners of his eyes as he smiled, testifying that he spent a lot of time outdoors. As did his sun-kissed, tawny hair.
Kate pursed her lips, reminding herself that Ted Bundy had been a good-looking man too.
“Are you stalking me?” she blurted, fingering the alarm button on her key fob.
He burst out with that deep laugh she’d admired on the beach, and then he sobered.
“Not at all. I live. Right. Next. Door.” He pointed at the apartment beside hers while he enunciated each word, and Kate barely concealed her growl of exasperation. He was way too attractive to have to run into him on a daily basis. He could seriously derail her resolution to steer clear of relationships, even casual ones, until her head was above water. But at least this was the explanation for his continual presence today. He wasn’t a serial killer.
Probably.
“Now that we’re neighbors, will you cut the suspense and tell me who you are?”
Kate glanced at her wristwatch. If she didn’t leave within the next five minutes, she’d be late. Mr. Cabrera valued punctuality, and she didn’t want to ruin her record.
“I need to go. Please move.”
“What if I get your mail by mistake? What if you win Publishers Clearinghouse and the notification comes in the mail, and because I don’t know your name, I put the envelope on top of the mailbox and someone else picks it up and gets all that money? That’s right. I can see your mind going over that very real possibility.”
His expression was so puppy dog earnest Kate couldn’t help it. The giggle percolated from deep inside her chest and erupted at the end of his outrageous statement. Good grief, his sense of humor was as appealing as his looks. And, here she was, once again enjoying the light-hearted banter her life had been without for so long.
She shook her head in frustrated capitulation. “Fine, you win. My name is Kate Munroe, I live next door, and this is my car. I need to leave right now or I’ll be late for my job, and if I’m late I’ll be fired, and then I won’t be able to live here. Do you want to be the reason I become homeless?”
His smile widened while his gaze caressed her face, warming as it tracked across her features. Her grin faded. She took another step away from his truck. She needed
distance from his potent sex appeal.
“That wasn’t so hard, was it? Glad to finally meet you, Kate Munroe. I look forward to getting to know you.”
“Hmph,” she replied, staring at his huge, dirty truck pointedly. He continued to smile into her face, until she shrugged. “Well? I can’t be late. I’ve met you. You’ve met me. I need to leave. Now.”
“Oh, yeah. Right. Sorry. I could get lost in your eyes. I can’t tell what color they are in this light. Guess I’ll just have to run into you again real soon.”
He reached for his gear shift, and Kate roused from the hypnotic state his words had put her in. Get lost in her eyes? What guy said that nowadays? In any day, for that matter, except in historical romance novels.
He put the truck in reverse and glanced at her again. She swallowed hard and straightened her shoulders. She would not turn into a puddle because he’d used a sexy turn of phrase. She was made of stronger stuff than that.
As he began to back up, he gave her a salute with his left hand. “Drive safely, Kate Munroe. I don’t want this first meeting to be our last. Good night.”
She stared stupidly after him as he reversed out of her way and then sat, waiting. She realized he still wanted to park in front of his place. As she pulled away, she couldn’t resist looking in her rearview mirror.
She cursed herself for the weakness. There was no room for a man in her life. She needed to work every minute of her day, either as a nanny or as a freelance designer, if she was ever going to get her previous life back. 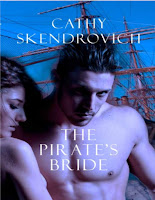 Cathy Skendrovich has always loved a good story, and spent her formative years scribbling what is now called Fan Fiction. The current heartthrob of the time featured heavily in all her stories. Unfortunately, once she went to college, her writing took the form of term papers, written on typewriters instead of computer keyboards.

Upon graduation, Cathy took a job as an English teacher in a middle school. Along the way, she married her husband of now thirty-three years, had two sons, and moved to southern Orange County, California. She chose to work part-time in the school system there.

Now she has returned to writing. Prisoner of Love is her first published novel, followed closely by The Pirate's Bride. The sequel to The Pirate's Bride, The Pirate Bride’s Holiday Masquerade, came out Oct. 1, 2017. Undercover with the Nanny, came out on April 23, 2018.

She likes writing romance because she feels it's lacking in today's technological world. While she enjoys writing contemporary stories, creating romance in bygone times fascinates her. She hopes her ability to write in both genres will be the beginning of a long and satisfying writing career.

Giveaway ends 11:59pm EST May 13th. Due to GDPR regulations you no longer need to submit your email address in the comments. If you have been selected as a winner your name will be posted at the top of the post. You may then contact maureen@JustContemporaryRomance.com to claim your prize. Your email address will be shared with the author/publicist providing the giveaway.
Posted by Maureen A. Miller at 12:30 AM