Congratulations to "Elley", the winner in JoAnn's giveaway. Thank you to all who participated!

Hi. My name is JoAnn Sky, and I write sweet contemporary adult romance, young adult romance with a magical twist, and children’s books. NO COWBOY REQUIRED is my debut. It’s the first of three books in the Biggest Little Love Story series and takes place in Reno, which is known as the “Biggest Little City in the World”.  NO COWBOY REQUIRED is a sweet, contemporary romance—think: Sweet Home Alabama meets Raising Helen.

Thanks for having me today! 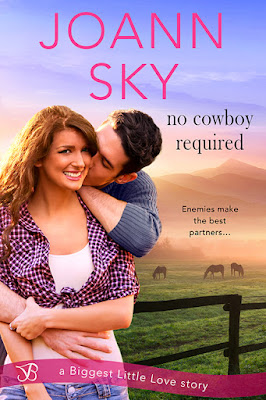 As a photographer in NYC, Grace Harper is a pro at handling the unexpected—which comes in handy when she inherits the ranch home she ran away from seven years ago…along with a young, autistic stepbrother she’s never met. And because nothing ever goes easy for her, Grace finds her frustrating, sexy ex-flame, Noah, taking care of JJ. But she’s getting out of this nowhere town fast, so she’ll have to find a way to keep from throttling Noah—without kissing him first.

Noah Taylor may be enemy number one to Grace, but she needs his help. He knows the girl he used to love is still there, beneath the heels and fancy clothes, so he’ll help her—and keep his distance like she says she wants. Only the more time they spend together, the closer he wants to get. Grace has no intention of staying, but she belongs in his arms—he just has to prove it to her.

AMAZON | ENTANGLED
EXCERPT
Take a quick peek at when my heroine Grace sees hero Noah for the first time in seven years:

She looked around at the bareness, her gaze eventually shifting up to the loft, still filled with hay. And memories. Memories she wanted to forget but couldn’t, like the bittersweet memories of Noah. Her friend, her knight, her once-upon-a-time everything. Goose bumps ran up her spine. This loft had been their kingdom, where they’d dreamed big when they were small. Later, it became a refuge, where they experimented with alcohol. And each other. A place where they planned their escape, where they—
“Hello, Gracie.”
She whirled around at the sound of his voice, as familiar as if she’d heard it hours—not years—ago. But the man standing in front of her wasn’t the boy she’d left behind. Dark stubble had replaced peach fuzz. The lanky, thin frame she remembered had morphed into broad shoulders and hard muscle. Hard-work-earned muscle, not gym-sculpted. His stance was confident, proud. Imposing.
He stared up to the loft and then shifted his focus to her. “Remembering old times?” The mischievous glint in his eyes hadn’t changed, nor had other things. His hair was still thick and black, one random curl hanging over his forehead. His dark blue eyes were still as deep as Lake Tahoe. His lips? Firm, full… Were they still totally kissable? Her mouth dried at the thought, and heat sprawled through her stomach, then lower.
What was wrong with her? She wasn’t a teenager anymore. This was the guy who’d broken her heart, pulverized it. And it wasn’t like she was Celibate Celia in New York, pining over him. Noah Taylor shouldn’t affect her body, shouldn’t affect her anymore.
And he shouldn’t be here.
This trip was supposed to be in and out, nice and easy. Sell the ranch, scoop up JJ, and skedaddle.
Noah’s gaze rolled down her body, lingered on her too-high heels, then climbed back up. “The City’s treated you well,” he said.
Bronzed abs peeked through the rip in his dirty T-shirt. Reno had treated him well. Very well. Not that she’d ever admit it, especially to him.

AUTHOR BIO
JoAnn Sky has written for years as part of her job (business and marketing plans and the like). One day she tried her hand at writing for fun—and liked it. Now she authors adult contemporary romance and young adult romance with a magical twist as well as children's books. She is a two-time Golden Heart® finalist. Originally from the Midwest, JoAnn currently lives in northern Nevada with her husband a.k.a. love of her life, three teenage children, and three crazy rescue dogs. No Cowboy Required is her debut novel.
Visit her at www.joannsky.com where you can sign up for her newsletter (and check out www.dogsandbooks.com for information about her children’s stories).  You can also connect on Twitter at @jaskybooks (http://twitter.com/JASkyBooks) or on Facebook (www.facebook.com/joannskyauthor).