Congratulations to "Dee", the winner in Kathy's giveaway. Thank you to all who participated!

I’ve attached a favorite moment of HITTING IT for everyone today. Rob is the hot new rookie in the Indianapolis Bobcats, Heidi is a struggling young journalist. They can’t be together because Rob’s communication with the press is controlled by team management, and yet they found this moment together by a firepit in his backyard.

I love this excerpt because it shows how I feel about my press, the good and the bad. I see myself in both Rob and Heidi here because I have moments just like this one. Some days I burn the press and all that publicity be damned. Other days, I feel like I exist because of all the words I create or other create about me. It’s weird. And it’s wonderful. And it’s life. 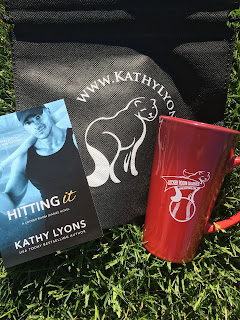 Here’s the excerpt. Comment below on if you see yourself reflected in this scene. One lucky winner will win a Locker Room Dairies café mug!

He went right to the business of lighting it and soon we had flames dancing in front of us. It was a lovely night with a nearly full moon and more stars than I’d ever seen, even down in Ft. Lauderdale. He pulled me to a bench and sat down next to me. We were near enough to the fire that I felt the heat of it on my face almost as much as the press of his large body heated my insides. We were thigh to thigh as he grabbed the full wastepaper basket.
“What is that?” I asked.
He pulled a handful of newsprint out and showed it to me. “Press clippings. Mom cuts out everything anybody says about me and leaves it on my dresser.”
I eyed the full wastebasket. “That’s a lot of press.”
“Tell me about it,” he drawled as he tossed a handful into the fire. He didn’t even look at the headlines, much less read all those column inches. He just tossed them all in the fire.
“Your mother spent hours doing that,” I said. “You’re just burning them?”
“Yup. And she knows. It’s been my ritual since I was in high school.”
“To burn the newspapers?”
“To burn whatever is said about me—good, bad, or ugly.”
I watched him toss more words onto the fire. I followed a particularly large chunk as it curled on the edges, caught flame, then disintegrated into ash. A black square lifted up into the air and I followed the tiny piece until it fluttered away, caught on the breeze.
“You really hate the press that much?” I asked.
“Nope. But it’s easy to let this shit get into my head. So after a particularly bad game in high school, my dad and I came out here and burned it all. The bad reviews first, but eventually everything. The stuff about me breaking hitting records. The first time someone said I was the new Babe Ruth. The time the story broke that I’d gone into the minors and then later to the Bobcats.” He held up a big article about his jump to the majors. It was the lead sports story in the Indianapolis Sun from a few months ago. With a grin, he tossed it into the fire. “It’s how I keep myself real. This stuff…” He held up another handful of careful clippings. “It’s not who I am.”
Again they went into the fire. Piece by piece until the wastebasket was empty. And I was impressed. I still had a copy of every article I’d written for the newspaper. I had a copy of my award-winning essay tucked in my file cabinet. My SAT scores hadn’t been important for years, but they were still pinned on the corkboard in my bedroom at home. Not to mention all the stuff my mom had put on our Wall of Accomplishments. I couldn’t bring myself to burn any of it. They were proof that I was smart. That I was a good writer. That I had value. And I looked at them when I began to doubt myself. I couldn’t imagine burning any of it.
“So if that isn’t you,” I asked, “what is?”
“Nothing is. I’m me, not this stuff.”
Grounded. The man was so damn grounded in who he was that I couldn’t begin to fathom it. I was my accomplishments. If someone asked me who I was, I’d list my job and what I’d written. Apparently, Rob was just a guy who played baseball really well and that blew my mind.
“You can’t possibly be that free of ego,” I said.
He flashed me that thousand-watt grin. “Well, I do count the pieces of paper.”
“What?”
He pointed at the waste bin. “There were three hundred and twelve articles in there. All about me.”
And there it was. A sparkle in his eye as he laughed at himself. Not only was he grounded, but he could make fun of his own ritual. He could show me that even burning all the press about him, he was still very aware of how big a deal he was in some circles. And somehow that just made him more freaking attractive. Humility, humor, and enough self-awareness to admit that part of him loved every moment of his fame.
“You are so full of shit,” I teased. “Burning the articles while counting every column inch.”
“It’s part of my charm.” 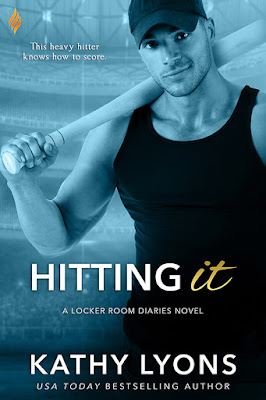 Making it to the Major Leagues is all rookie ballplayer, Rob Lee, has ever dreamed of. But now, he's a little overwhelmed with his new celebrity status. Everyone wants a piece of the new heavy hitter for the Indianapolis Bobcats. Still, he's worked hard for it, and he doesn't have many regrets. Although there is one...
If journalist Heidi Wong wants to keep her job, she needs to come up with a story—fast! That's why she tells her boss that she knows the Bobcat's reclusive new slugger, Rob Lee. And she does...in the Biblical sense. During Spring Break three years ago, she and Rob shared a torrid night on the beach. And she's wanted him again ever since.
But everyone knows reporters and athletes don't mix. Rob's contract doesn't allow him to talk to the press, and her job depends on it. Which is driving them both just a little crazy…

About the Author:
Kathy Lyons is the fun, contemporary side of USA TODAY bestselling author Jade Lee. She loves sassy romance with lots of laughter and sex. Spice is the variety of life, right? Okay, so maybe two kids, two cats, two pennames, and writing over 50 books has messed with her mind, but she still keeps having fun.Or hang out with her sexy historical half, Jade Lee. Titled heroes with dark secrets are Jade's passion. Especially when they fall for women who add more than just spice to their lives.
Giveaway ends 11:59pm EST May 18th. Due to GDPR regulations you no longer need to submit your email address in the comments. If you have been selected as a winner your name will be posted at the top of the post. You may then contact maureen@JustContemporaryRomance.com to claim your prize. Your email address will be shared with the author/publicist providing the giveaway.
Posted by Maureen A. Miller at 12:30 AM