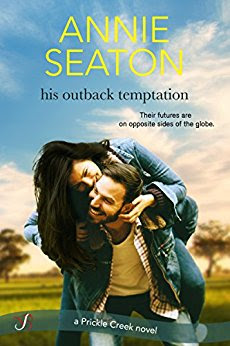 Freelance photographer Sebastian Richards has put aside travelling the world to show his grandmother he is capable of helping out on the family farm, even though it’s hard to let go of his wanderlust. But when he rescues a beautiful woman from a difficult situation, and Sebastian learns Isabella Romano is going to his hometown, heading back to Prickle Creek holds more appeal.
Isabella has come home to the Outback for a short visit to her father before she heads off to begin her dream job in England. Circumstances throw Isabella and Sebastian together at every turn—so maybe a short summer fling could be fun?
Isabella is determined to leave, even though her heart wants to stay. Sebastian is determined to stay, though his heart wants to go. But the only way for them to be happy is to take a chance on love.
Each book in the Prickle Creek series is STANDALONE:

“Haven’t you got that swag up yet?’ Her voice was husky and he fumbled with the strap, tempted to disregard the swag and lie down beside her on the groundsheet. The air hummed with tension as she stood and waited while he undid the clips on the swag. As he leaned over to pull it up, a teasing finger ran down the back of his shirt. He turned; Isabella was close behind him, her breath warm on the back of his neck. It was either that or the fact that she’d now managed to pull his shirt from the waistband of his jeans and her fingers were playing over the bare skin of his lower back that sent a shiver skittering down his arms.

He groaned. “If you want protection from the weather you’d better stand over there where I can’t reach you so I can concentrate on getting this swag up.”

“Get the swag up?” Her grin was cheeky and he shook his head at her double entendre.

“I don’t think you’re going to have any trouble, um, getting the swag up, are you?” Her voice was low and husky and it was all he could do not to reach out and take her in his arms.

This time her eyes were innocent. “Why?”

Sebastian grinned back at her, and tried to steady his hands as he pulled the tent pegs from the small bag. It only took ten minutes to get the swag up and secure the pegs, but it felt like an hour to Sebastian.

He stood back and gestured to the swag. “Madame, your room is ready.”

Isabella smiled, and her tongue peeked through her rosy red lips as her eyes held his.

“May I kiss you first, kind sir, to say thank you for finding me such a lovely place to stay?”

Her eyes were dancing as he held his arms open. “You can.”

Isabella’s breasts were soft against his chest and he closed his eyes as her soft groan matched his as he lowered his mouth to her lips.

“I am.” Her words vibrated against his lips and for a moment he forgot everything else as he lost himself exploring her mouth. She sighed as he moved down to kissing the soft skin of her neck, and his hands explored the soft curves under her T-shirt.

He looked up at the cloudless blue sky. ‘Hurry up. You don’t want to get wet.”

Heat raced up his neck as she raised her eyebrows.

The sexy giggle that followed him made him hurry all the faster to the car to get the packet he’d put into his backpack.


About the Author:
#1 bestselling author in Amazon Romance series.Winner ...Best Established Author of the Year 2017 AUSROMWinner ...Best Established Author of the Year 2015 AUSROMWinner ...Author of the Year 2014 AUSROMAnnie Seaton lives near the beach on the east coast of Australia and is published in print in Australia and New Zealand with the Porter Sisters series, as well as internationally in e-books. Her first traditionally published print book Kakadu Sunset was followed by Daintree, and Diamond Sky. She has recently signed a two book contract with Harper Collins in the HQ fiction imprint. Each winter, Annie and her husband leave the beach to roam the remote areas of Australia for story ideas and research.
Posted by Maureen A. Miller at 12:30 AM