Like a mother, an author isn’t supposed to favor one book over another, but, like children, some books are just a little…easier than others. Less banging my head against the desk, more snickering to myself. 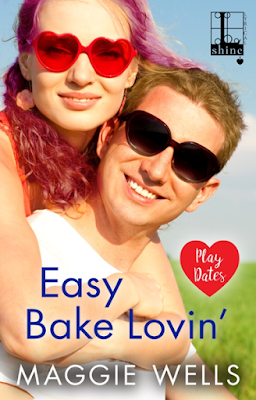 EASY BAKE LOVIN’ (Play Dates #2) was one of those books.

I think one of the reasons why it was so fun to write is that my sense of humor is roughly equivalent to that of a twelve-year-old.

Naughty things make me giggle. Everyday things that can be made to sound naughty make me laugh out loud. Georgianna Walters and I have that in common.

You see, Georgie is a woman who enjoys a good double entendre. Like me, she even appreciates a bad one. As the owner of Getta Piece adult bakery, Georgie revels in coming up with clever, if not a bit risqué, names for the treats she serves up to Chicago’s fun-loving bachelors and bachelorettes.

But EASY BAKE LOVIN’ has a more serious side as well. His name is Mike Simmons, and he is a single-minded single dad raising a precocious boy and a lively little girl. Caught in the doldrums of everyday life, Mike soon discovers that Georgie is just the right woman to add some spice to his life.

I am a big believer in opposites attracting, and at first glance it seems couples don’t come more mismatched than Mike and Georgie. Or so it would appear…
~~~~
Excerpt:
“Quite the selection, don’t you think?”
He realized he’d been staring too long when her smile widened and she gestured to the array of semi-pornographic pastries in the case. Like she was some kind of game show hostess showing off the fabulous and exciting prizes she had to offer.
She slid her hands along the case, drew back, and did a pirouette to encompass the array of goods on display. “Anything catch your eye?”
He caught a flash of leg as her apron flew in a circle around her. Despite the approaching winter, she wore nothing but some skimpy shorts under her apron. Well, a tank top and shorts, as well as some knee-high socks striped like the Wicked Witch of the West’s, but his brain shorted out when he got an eyeful of toned thigh, so the rest hardly counted.
She also wore boots. Thick-soled combat-style boots like the soldiers wore to march for miles over rugged terrain. Boots that made a man want to test exactly how kickass the wearer might be.
Mike shook himself out of his daze. “Oh, uh, no. I mean, yes.” He shook his head harder. “I mean, everything looks, um, great.”
“People come from miles around to get their hands on my Boston Cream Bosoms.”
Mike expelled a short laugh. She didn’t need to convince him; he was a believer. “I bet they do.”
She tipped her head to the side. “This is one of those moments when, as a feminist, I don’t know whether to be offended or flattered, but I bring the confusion on myself, so…” She shrugged and wrinkled her nose. The tiny diamond winked at him.
“This is one of those moments when, as both a feminist and a card-carrying member of the man club, I don’t know whether to…” He trailed off, letting the thought dangle.
“Make a break for it?”
“Exactly.”
She laughed again, and this time, a pulse of pleasure reverberated in his body. This woman was…infectious. And he didn’t have time to come down with a bad case of lust.
“Don’t feel bad. A lot of guys feel the same way when they first come in.”
“Don’t you think some of this is just the least bit…degrading to women?”
She nodded gravely. “And to men.”
“It’s a little obscene.” The words came out with more heat than he intended. Almost immediately, he regretted them. She was a potential client, after all. Who was he to judge?
“I think the human body is beautiful in any form,” she replied, seemingly unfazed.
“It’s objectifying the human body.”
“We objectify the human body every day in a million ways.” She leaned in a fraction of an inch. “I’m pretty sure you were objectifying mine just a minute ago.”

Giveaway:
How about you? Do you believe in the power of opposites, or do you like a matched set?

Comment below, and I will send one winner a digital copy of the first book in the Play Dates series, PLAY DATES!

About The Author:
By day, Maggie Wells is buried in spreadsheets. At night, she pens tales of people tangling up the sheets. The product of a charming rogue and a shameless flirt, you only have to scratch the surface of this mild-mannered married lady to find a naughty streak a mile wide. Maggie has a passion for college football, processed cheese foods, and happy endings. Not necessarily in that order.