Scoring Off the Field – Exclusive Excerpt 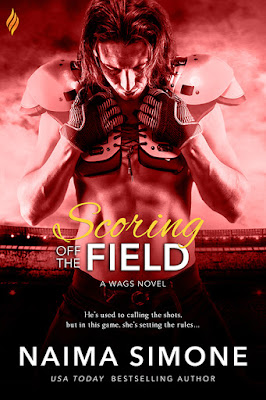 Tennyson Clark is getting a life. First step: quitting her job as assistant to Dominic Anderson, star quarterback for the Washington Warriors, her best friend…and the man she’s been secretly in love with for years. But since the gorgeous, if overprotective playboy has only ever seen her as his BFF, she’s finally ready to relinquish her tattered fantasy and move on. Enter steps two and three: new job and new man.
Football is Dominic's life, and with his contract soon up for renewal, all his focus needs to be on the game. But Tennyson—dependable, logical Tennyson—is making that next to impossible with her mysterious new job and her sudden interest in online dating. He doesn’t do relationships. But the thought of another man touching her sexier-than-hell curves has him suddenly wanting more from his best friend.
Indulging in hot, dirty, what’s-my-name sex with no strings and lots of benefits is simple, uncomplicated…until it’s not.
Each book in the WAGS series is STANDALONE:
* Scoring with the Wrong Twin
* Scoring Off the Field

“What’s wrong, Tenny? And don’t tell me nothing. I know that’s woman-speak for shit’s about to hit the fan,” Dom teased.
But Tennyson didn’t roll her eyes or even lay into him about being a meathead sexist. Instead, she remained silent, confirming his suspicion.
“You,” she said, shoving her curls out of her face. “You turned down the movie premiere without even a second thought.”
Hold on. She was pissed over that? What the hell? He shook his head. “I didn’t want to go.”
“You haven’t had any problem going to those types of events before…before…” She waved a finger between them. “So why now, Dom?”
“Okay, let me get this straight,” he said slowly, confusion and anger coalescing into a swirling, murky mass in his chest. “You wanted me to go out on a date with another woman.” Even stating it sounded asinine and just fucking weird to his ears.
“What I wanted or didn’t want shouldn’t have mattered. And that’s the point,” she retorted in the same I’m Talking to a Crazy Person tone he’d used. “Before we had sex, you wouldn’t have thought twice about letting Brian arrange the date and public appearance. Football is your top priority. It always has been, always will be. But today, you made a decision that was counteractive to that. And you did it for me. For my feelings,” she almost shouted. She reeled back slightly, her eyes widening as if her outburst had surprised her, too. Yes, too. Because she’d shocked the shit out of him.
His gut instinct reaction was to deny her accusation. But he paused, and it hit him that she was correct. He had to compartmentalize. If this friends-with-benefits, no-strings-attached arrangement was going to work and their friendship be intact afterward, then he had to remember his priorities. The end game. Which was football. Always football. Security. Legacy. A path to another career after he hung up his jersey.
“You’re right. No, don’t look away from me,” he admonished, gently cupping her cheek. He waited until her gaze returned to his. Christ, she was so damn pretty. “I did make the decision based on your feelings, and yeah, there is a chance I would’ve agreed to go before you and I started having sex. But I also turned it down because I didn’t want to touch another woman while I have you.” This time he not only swept his thumb over her bottom lip, he dipped the tip into her mouth, grazing his skin along the edge of her teeth. “So I’ll promise not to confuse things again. For both our sakes. But I’m adding another stipulation to our deal. Don’t expect me to f**k another woman when I’m with you.”
Unable to prevent himself any longer, he dipped his head for a quick taste of her lush mouth. He groaned. And returned for another sample. Sweetness of the wine she’d had with lunch. Richness of the creamy dessert. And her. All her.
“You’re who I want to ride, bareback. Damn, do you know how it felt to be inside you, with nothing between us? Like goddamn heaven. And hell. Everything beautiful and painful. Pleasure and agony. Yeah, being balls deep in you is like nothing in this f**king world.” He abandoned her cheek and tunneled his fingers into the dark, wild curls that somewhere along the line he’d developed a probably unhealthy fascination with. Gripping her hair, he tugged her head back. Watched her lashes flutter. Heard her soft, hungry gasp. “I want it again,” he growled against her mouth. “Are you going to give it to me?”
A moan escaped her seconds before she lifted those lashes. “Yes.”
“For however long I want it?” he demanded.
The haze that had started to cloud her eyes slowly sharpened. “For however long I want it.”

About the Author:
USA Today Bestselling author Naima Simone’s love of romance was first stirred by Johanna Lindsey, Sandra Brown and Linda Howard many years ago. Well not that many. She is only eighteen…ish. Though her first attempt at a romance novel starring Ralph Tresvant from New Edition never saw the light of day, her love of romance, reading and writing has endured. Published since 2009, she spends her days—and nights— writing sizzling romances with a touch of humor and snark.She is wife to Superman, or his non-Kryptonian, less bullet proof equivalent, and mother to the most awesome kids ever. They all live in perfect, sometimes domestically-challenged bliss in the southern United States.