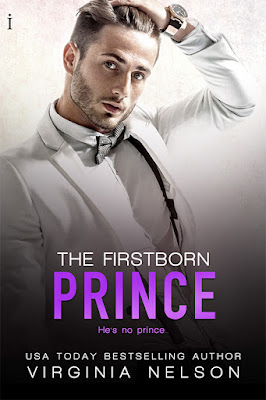 
Foster Boyd wants control of the family business before his brother’s escapades ruin their reputation. Since he can’t force his brother out, he needs to distract him--or reform him. Where can he find a woman willing to do anything to save his business?
Natalie Stolen was at the top of her game as image consultant to the stars. But when one of her client’s reveals a juicy secret, the media went on a feeding frenzy, taking down Natalie’s career faster than she could say “scandal.” Now in dire straits, she’s been given an offer she can’t refuse...
But what happens when the woman you hired to distract your brother is the only woman you can’t stop thinking about?
Each book in the Billionaire Dynasties series is STANDALONE.
* The Penthouse Prince
* The Irish Prince
* The Firstborn Prince


“Do you usually try to manipulate people over lunch?”
His smile was whiplash fast and charming as hell. “I don’t reserve my skills for just lunchtime.”
“Save it, Mr. Boyd,” she said.
He shook his head. “Foster.”
“Pardon me?” She put the napkin back in her lap and grabbed another forkful of the scallops. She hated to admit he was right, but he was. She wanted to eat them while they were still warm and buttery and perfect, a delicious counterpoint to the emulsion, which had a bite of sour, and the unexpected sweetness of the cauliflower.
“If he’s going to think he’s stealing you from me, he needs to think we’re at least on the road to becoming intimate. Which means you really must call me by my first name, Natalie.”


She choked on the excellent scallop and noted it didn’t taste nearly as wonderful when lodged in her windpipe.

USA Today Best Selling author, Virginia Nelson likes knights in rusted and dinged up armor, heroes that snarl instead of croon, and heroines who can't remember to say the right thing even with an author writing their dialogue. Her books are full of snark, sex, and random acts of ineptitude--not always in that order.