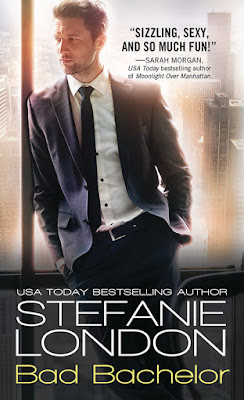 Everybody's talking about the hot new app reviewing New York's most eligible bachelors. But why focus on prince charming when you can read the latest dirt on the lowest-ranked "Bad Bachelors"—NYC's most notorious bad boys.If one more person mentions Bad Bachelors to Reed McMahon, someone's gonna get hurt. A PR whiz, Reed is known as an 'image fixer' but his womanizing ways have caught up with him. What he needs is a PR miracle of his own.When Reed strolls into Darcy Greer's workplace offering to help save the struggling library, she isn't buying it. The prickly Brooklynite knows Reed is exactly the kind of guy she should avoid. But the library does need his help. But as she reluctantly works with Reed, she realizes there's more to a man than his reputation. Maybe, just maybe Bad Bachelor #1 is THE one for her.

About the Author:
Books that make you laugh a little, and love a lot.
Stefanie London is the USA Today bestselling author of over fifteen contemporary romances and romantic comedies.
Stefanie’s books have been called “genuinely entertaining and memorable” by Booklist, and her writing praised as “Elegant, descriptive and delectable” by RT magazine. Her stories have earned prestigious awards such as the RT Top Pick and have achieved bestseller status with USA Today and iBooks.
Growing up, Stefanie came from a family of women who loved to read. After sneaking several literature subjects into her ‘very practical’ Business degree, she got a job in Communications. But writing emails for CIOs didn’t fulfil her creative urges, so she turned to fiction and was finally able to write the stories that kept her mind busy at night.
Originally from Australia, she now lives in Toronto with her very own hero and is currently in the process of doing her best to travel the world. She frequently indulges in her passions for good coffee, lipstick, romance novels and anything zombie-related.
Posted by Maureen A. Miller at 12:30 AM