Are you ready for the Winter Games? I’ve always been caught up in the excitement, and I'm the least athletic person you could ever meet. But the excitement of the Olympics always gets to me, hence the reason why I wrote Trouble With Gold. To write a realistic story, research was key! I found some cool, interesting facts about the Winter Olympics. Here are my faves:

1)     The fact that started this anthology -- 100,000 condoms is the standard order for every Olympics. One-hundred-thousand! Crazy! You put that many condoms together with hot, sexy athletes and you’re bound to find a romance story in the making.

2)     There are seven categories in the Winter Olympics: Skiing, Snowboarding, Skating, Ice Hockey, Curling, Luge, Bobsleigh. In Trouble With Gold, I had to write about a snowboarder.

3)      Eddie the Eagle is famous for being the world’s worst ski jumper and prompted a rule called “The Eddie Rule” where athletes have to pass certain standards to compete. He went on to record a top 50 record in the UK and Finland. Would you like a hero like Eddie the Eagle?

6)     Snowboarding is one of the last events added to the winter Olympics in 1998. I was surprised by this fact since snowboarding is so popular. The last Olympics two new snowboarding events were included in the Sochi games. My hero, Ty in Trouble with Gold is one hot snowboarder who is a lot of fun.

What are you looking forward to regarding the Winter Olympics? Who’s your favorite athlete? 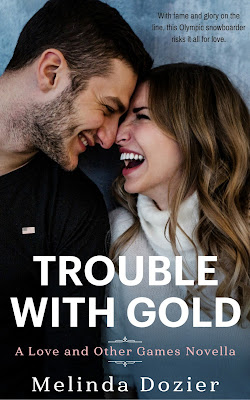 US snowboarder and notorious prankster, Ty (Trouble) Madsen is only getting a taste of his own medicine when his Olympic teammates shackle him to a fence wearing nothing but his boxers.  Reception and protocol volunteer, Nadia Hoffman, gets up close and personal with the sexy snowboarder to rescue him, but she's not the kind of girl who lets her hormones get in her way.  A professional performance could help her land her dream job at Olympics Committee Headquarters, but her new assignment supervising the rambunctious US Snowboarding Team is making that difficult.  Can she see behind the snowman in the community center bathroom and into the warm heart of the man everyone calls Trouble?

Nadia looked across the path toward the stairs ahead of her and saw a very well built, tall man, light brown hair curled around his beanie, with a chiseled chest and tight thighs. Wait a minute. Why could she see his chest and thighs? It was zero degrees Celsius. Why would a man be standing in nothing but his underwear? Her mother always warned her about sickos.

She dug into her purse, searching for her mace – something she carried since her internship in New York last summer. It settled somewhere at the bottom. Great. When she finally needed it, she couldn’t find it.

“I have mace.” She answered, still searching. “Stay where you are.”

“Not a problem.” He laughed, a deep laugh that sent tingly sensations from head to toe. God, sleep deprivation must be worse than she thought if she had these thoughts about a sicko.
She shook her head and finally held the mace up. The man remained in the same spot. He had a fabulous smile and a few wrinkles at the side of his eyes, from smiling or being out in the sun. He must be an athlete with that tight physique. “Who are you and what are you doing?”

Instead of answering, he let out a laugh all while his teeth chattered. An ache sat in her throat. Poor guy. If his blue lips and frosted hair was any indication, he was beyond cold.

“Are you okay?” She slowly approached the stairs, not sure what the handsome man would do. But, he looked like he was in trouble.

His eyes perused her from top to bottom and then he looked back into her face. “Better now.” He smirked.

Author Bio:
Reading romance has always been at the top of Melinda's favorite past times. You can always find a book in her hands no matter where she is. Melinda is Louisiana born, New Mexico raised, Guatemala adopted, and recently a newcomer to Houston, Texas. So, it's only natural that her stories take place all across the world.Melinda loves reading, reality TV, traveling, blogging, and playing Words with Friends. Find Melinda on social media at: