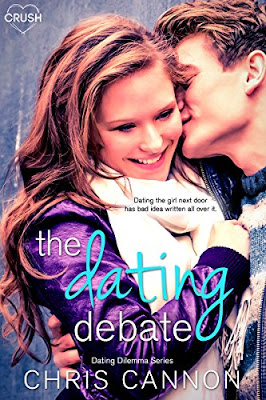 Nina Barnes thinks Valentine’s Day should be optional. That way single people like her wouldn’t be
subjected to kissy Cupids all over the place. That is, until her mom moves them next door to the brooding hottie of Greenbrier High, West Smith. He’s funny, looks amazing in a black leather jacket, and he’s fluent in Harry Potter, but she’s not sure he’s boyfriend material.

West isn’t sure what to make of Nina. She’s cute and loves to read as much as he does, but she seems to need to debate everything and she has a pathological insistence on telling the truth. And West doesn’t exactly know how to handle that, since his entire life is a carefully constructed secret. Dating the girl next door could be a ton of fun, but only if Nina never finds out the truth about his home life. It’s one secret that could bring them together or rip them apart.
Disclaimer: This Entangled Teen Crush book is not for anyone who has to get in the last word, but it is for all book nerds, especially those who live next door to so called unapproachable gorgeous guys. There’s no debating the chemistry.

Excerpt:
“It’s Vicky, isn’t it?” Nina grinned like she knew a big secret. “Why are you hiding from your girlfriend?”
“Ex-girlfriend,” I said.
“Since when?”
“It’s been a few weeks.” Not like I was going to share the details of my dating life with her.
“I bet she’s having Valentine’s Day Dance remorse.”
“What does that mean?”
“She probably wants to go to the dance, and getting back together with you would be way easier than finding a new guy to take her.” Nina chuckled like the situation was hilarious.
“Not funny.” Vicky had seen my car. What could I do?
“I’m texting that I’m having dinner with my neighbors.” All three of us watched as Vicky looked to the right at Nina’s house and then to the left at the empty lot that separated my house from the neighbors on the other side.
“What’s everyone watching?” Jason, Nina’s brother, asked as he came into the room. Our paths had crossed at school a few times. He was a decent guy. “Hey, West.”
“Hello,” I said. “My ex, Vicky, stopped by. I think she’s coming over here. You should ask her to the Valentine’s Dance.”
“No thanks. I like my life drama free.” He walked over to the table, filled a plate with fried rice, and leaned back against the counter. “I’ll just stay and watch the show.”


Apparently, everyone in this house was a smart-ass.

About the Author:
Chris Cannon is the award-winning author of the Going Down In Flames series and the Boyfriend Chronicles. She lives in Southern Illinois with her husband and various furry beasts. She believes coffee is the Elixir of Life. Most evenings after work, you can find her sucking down caffeine and writing fire-breathing paranormal adventures or snarky romantic comedies.
Posted by Maureen A. Miller at 12:30 AM