I’ve always been rather persistent...

Congratulations to "Colleen C.", the winner in Maggie's giveaway. Thank you to all who participated!

I’ve always been rather persistent. I even bought the T-shirt. 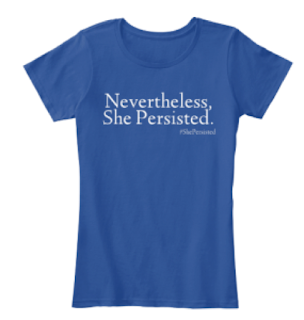 I have five older brothers. They didn’t always want to let me play with them, so they used their superior size and strength to try to muscle me out.
With five boys and little hope of ever growing grass, my father covered our backyard in asphalt, installed a regulation basketball hoop, and marked the free-throw and three-point lines with spray paint. The ‘no blood, no foul’ rule was instituted. I was never big enough to mix it up in the games, but they would let me play H-O-R-S-E with them. Of course, they could stand behind either of those spray-painted lines and knock me out of the game in five quick rounds.
Nevertheless, I persisted.
Being a small girl, I had little hope of developing the arm strength for shots from field goal range. I needed to develop another weapon.
And so, I became the queen of the backwards bucket shot.
With a bit of practice, I could (and still can) sink a basket from anywhere within the arc by turning my back on the basket, spot-checking my alignment with the goal, then hurling the ball up over my head from between my knees.
I did what I had to do. I persisted until I found a way to give myself a chance to win. 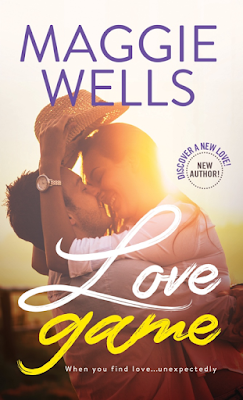 Kate Snyder, the heroine in my new book, LOVE GAME, is a born winner. She nabbed her first NCAA championship title as an undergraduate basketball player, went on to win a gold medal at the Olympics, then came home to take the WNBA by storm. When an injury ended her playing days, Kate persisted. She went back to her alma mater as an assistant coach, then took over the top job. As Head Coach, she has led her players to a national championship four times.
It’s no wonder she’s lightly peeved when the university signs a scandal-tainted football coach to a multi-million dollar contract.
Excerpt:
Kate dropped the pen she’d been clicking manically and glanced toward the window. Intruding on Coach Hotshot’s press conference wasn’t the most mature way to introduce herself, but damn it, this was her turf. She’d spent her entire adult life representing Wolcott University athletics, and she wasn’t about to be brushed aside for some smarmy has-been with a shoulder pad fetish.

Her phone rang, and she reached for it without looking. “Kate Snyder.”

Twisting in her seat, Kate smirked as the Wolcott Athletics home page loaded on her computer screen. It hadn’t taken Millie long to get a snapshot of Kate nose-to-nose with Danny McMillan posted and released to the press. The university’s media maven was as industrious as she was insidious. Once Millie wrapped her arms around an idea, it was almost impossible to pry it from her grasp.

Kate fell back in her chair. “Does Jerry Seinfeld know you’re stealing his lines?”

“It’s Kenny Bania’s line.” The older woman’s raspy voice might have indicated a three-pack-a-day habit, but Kate knew for a fact Millie had never taken a puff. The woman ran marathons as often as others ran errands.

Heaving a sigh, Kate tucked the receiver under her chin. “I’m glad you enjoyed it.”

“Enjoyed it? NSN called. They’re sending the crew in to talk to you this week. Not Brittany, the documentary crew.” Kate’s eyebrows shot up. “They want to shine their Sports Spotlight on you ASAP, Coach.”

Kate rolled her eyes. “I bet they do.” It was hard to keep the edge of bitterness out of her voice. The network had already pitched the documentary idea, and she signed the papers nearly two years earlier. Somehow, there was always a bigger story to be told. A man-sized story. She tapped her mouse to minimize the screen. “Tell them to bring it on.”

“Avery said to remind you that you built this athletic program. Don’t let them marginalize you. Keep giving him hell.”

Kate smiled, seeing straight through the moment of sisterly solidarity to the media circus that was sure to blossom at the center of this hiring fiasco. “Will do.”

“Good girl. Your contract’s almost up and you can’t buy this kind of publicity.” 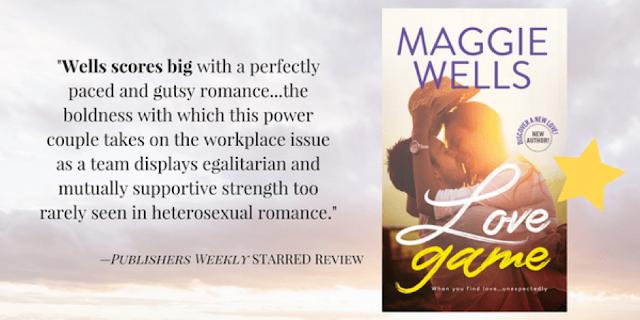 Giveaway:
How about you? Tell me about a time when your persistence paid off, and I’ll gift you with a digital copy of the first book in my single dads series, PLAY DATES (Play Dates #1).
LOVE GAME is available now in eBook and mass market paperback at your favorite retailer.
Amazon ~ Apple ~ B&N ~ Google Play ~ Kobo  ~ Powell's ~ Books-A-Million ~ The Ripped Bodice

By day, Maggie Wells is buried in spreadsheets. At night, she pens tales of people tangling up the sheets. The product of a charming rogue and a shameless flirt, you only have to scratch the surface of this mild-mannered married lady to find a naughty streak a mile wide. Maggie has a passion for college football, processed cheese foods, and happy endings. Not necessarily in that order.

Giveaway ends 11:59pm EST Feb. 13th. Please supply your email in the post. You may use spaces or full text for security. (ex. jsmith at gmail dot com) If you do not wish to supply your email, or have trouble posting, please email maureen@JustContemporaryRomance.com with a subject title of JCR GIVEAWAY to be entered in the current giveaway.
Posted by Maureen A. Miller at 12:30 AM