His for the Week

Congratulations to "Colleen C.", the winner in Alice's giveaway. Thank you to all who participated!

I’m glad I can incorporate that sort of lovemaking in my books.  In my latest from Entangled Scorched, His for the Week, my two characters find themselves at an exotic, erotic resort, complete with a very private place called “The Barn” where guests pursue all sorts of sexual expression.  My hero and heroine dabble in experiences quite outside their day-to-day lives.
Both Nate and Désirée are dead set against falling in love with each other.  He because of a bad marriage in his past and she because she writes a column called Sexy and Single.  Of course, this is a romance, and love conquers all. 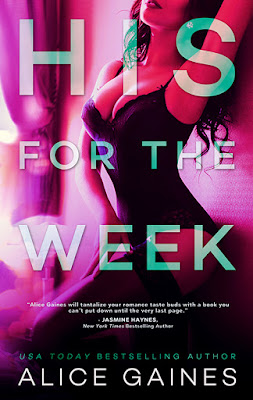 HIS FOR THE WEEK

Sex columnist Désirée “Rae” Knight is in a bind—and not the kind she usually likes. Her newest assignment, and possible big break, is an article for her magazine on the sex resort that just opened. The only problem is it’s couples only. Although she writes about having red-hot sex, she’s been single longer than she’d like to admit. Enter her coffee shop crush, who she’s been secretly ogling every morning. Trouble is, he doesn’t know she exists.
When Nate Winslow recognizes the shy, quiet woman at Sufficient Grounds as the author of the sex columns that fuel his fantasies, he’s surprised. And the last thing he expects is an invitation to join her at a sex resort. But his answer is hell yes!
Rae and Nate have enough chemistry in the bedroom to set the sheets ablaze. When Rae insists they limit their relationship to sex only, Nate agrees since he’s burned out on love. But the more they push each other’s boundaries, the more they realize one week won’t be enough.

Excerpt
“I’d like to know exactly what’s expected of me,” he said. “I’ve never done anything like this before.”

She stopped herself before she blurted out that he could do whatever he wanted. True, she’d brought him here because of her job, but in fact she’d wanted him since the first time she’d seen him. She wrote a column telling women to go after their desires, so she had no reason not to follow her own advice.

“Do whatever comes naturally, I guess,” she said. There. That hadn’t been so difficult. After that kiss at the coffee shop, they both knew what would happen once they got here. She only had to make herself relax and enjoy it.

“What’s okay with a Hook-Up Guy in public?” He crossed his arms over his chest. “Holding your hand. Touching you. Putting my arm around you. Those are all allowed?”

He raised a hand to her face and rubbed the backs of his fingers over her cheek. “This is allowed?”

She did her best not to tremble. “Sure.”

“Uh-huh.” He walked around behind her and ran his fingertips from the spot behind her ear down to her shoulder. “What about this?”

“And this?” He pressed his lips to the spot where her neck met her shoulder.

“For now, just in private. We’ll find out later what goes on in The Barn.” Anything more, and she’d be purring like a cat and arching to have more intimate parts of her scratched.

“And this.” He grasped the zipper pull of her dress and eased it down. “In private.”