From Paris, With Love


There are some places I have visited have that ‘spoken’ to me more than others. Paris is one of those places. Ever since I first visited at the age of 15, I’ve mesmerized by the place. In short, I can’t get enough of it. After all these years, I still can’t quite put my finger on what it is I adore so much about it, but it definitely has a special place in my heart. Perhaps the appeal is a combination of the things that make it uniquely Paris: the architecture, food, fashion, art, the sense of endless opportunity and possibility, the grandeur and refined but casual romance, and just the general “vibe.” Nowhere else in the world compares. Each time I visit, I fall a little more in love with it than the last. Each time I leave, I vow that our love affair isn’t over yet, and that I’ll definitely be back. I always am.

I was almost inevitable then that Paris would feature heavily in Catching London. The central characters, Arlo and London, tour the world together, but Paris provides the backdrop for some of the most pivotal scenes in the book. As they tread the ancient pavements, worn thin by the feet of lovers past and present, they take photos documenting their trip. Will those photos also document their journey as lovers? Paris is a city of grand gestures and Arlo is a man of grand means, will he use those means to show London Paris like she’s never seen it before? Will they or won’t they succumb to the inherent romance of the City of Love, or will the romance around them convince them that theirs isn’t to be?

You’ll have to read Catching London for yourself to find out for sure, but in the meantime, know that no matter what happens between them, Arlo and London will always have Paris. 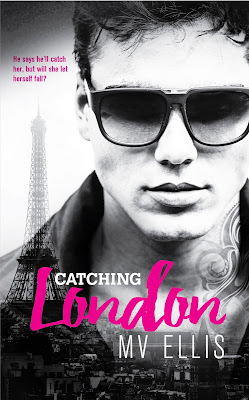 He’s not looking to change his bad boy ways.

Arlo Jones is a badass millionaire rock star with the world at his feet. He lives the “sex, drugs and rock ‘n’ roll” lifestyle to the max, and believes in working hard and playing harder. He’s a man who always gets what he wants, especially when it comes to women. Until he meets London.
She’s a damaged dancer not looking to fall.
All London Llwellyn wants is to rebuild her life following the tragic car accident that robbed her of her fiancé, and ended her career as a professional ballet dancer. She’s working two jobs to scrape together the cash to set up her own studio, and reinvent herself as a photographer. The last thing she wants is to get involved.

Arlo promises to always be there to catch her, but can London trust him enough to let herself fall?

Excerpt
The sun is just starting to set, the muted colors of the Paris skyline perfectly matching Arlo’s somber mood. It’s a beautiful sight. He’s stunning, and Paris speaks for itself. The two together are a potent combination. It would make a dramatic image for the book, but something tells me now is not the time to start firing off shots, so I leave my camera in my bag. I also resist the urge to run to him and smother him with passionate kisses. I can’t get over how gorgeous he is. Months on, and that shit never gets old. I push all those feelings under, and silently take a few photos in my mind.

Instead of flinging my arms around him, I greet him with a curt nod, which he briskly returns while quickly wrapping up his call—no doubt hanging up on the person on the other end while they are still speaking. No smiles, no words, and only fleeting eye contact. Looks like we’re in for a fun night. He motions toward the car, and I climb in—sitting as far away from him on the back seat as possible—and stare out at the dusky beauty of this glorious city.

The car pulls away from the sidewalk and wends its way into the early evening traffic. Much like my fascination with Arlo, I’ll never get over the majesty of Paris, and I’m pretty sure that however well I get to know it, the city will never lose its mystique for me. We seem to be going the scenic route back to the hotel, taking in all the sights on the way. Not that I’m complaining—I’m not exactly in a hurry to get back, considering the tension between us.

We pull up outside the hotel and exit the car in silence. I should have known it was a mistake to agree to spend these few days with Arlo, given our history. This “thing” between us—whatever it is—has been a real roller coaster, and it’s only been a few months. That’s damning in itself.

As I start walking, Arlo suddenly grabs me by the wrist, turning sharply to face me, and pulling me to his chest. The sudden maneuver catches me off guard, and I stumble, almost losing my balance. He steadies me, drawing me closer, speaking into my hair.

“I’ll always be here to catch you, remember that.”

MV Ellis Bio
MV ELLIS knows what it’s like to fall head over heels in love with a badass musician. She followed her heart halfway around the world to be with one. She moved from London to Sydney after a steamy holiday romance with a sexy bass player in sultry Brazil.Twelve years, two children and a dog later, and she’s still smitten. All this with a guy she sat next to on a bus for 36 hours! She has toured internationally as a ‘WAG’, and her experiences inspire her writing.Ellis’ love of romance began when she was 11 years old, after a summer spent secretly reading her auntie’s books. She’s been a sucker for an alpha hero and strong heroine ever since.An avid reader, Ellis always knew that she’d write a book of her own one day. She was right about that. Following a career spanning advertising, marketing, and social media, she finally wrote Catching London in 2017.Instagram instagram.com/authormvellisTwitter twitter.com/authormvellisFacebook facebook.com/authormvellisGoodreads goodreads.com/author/show/17161992.M_V_EllisBookbub bookbub.com/authors/mv-ellisPinterest pinterest.com/authormvellis
Posted by Maureen A. Miller at 12:30 AM